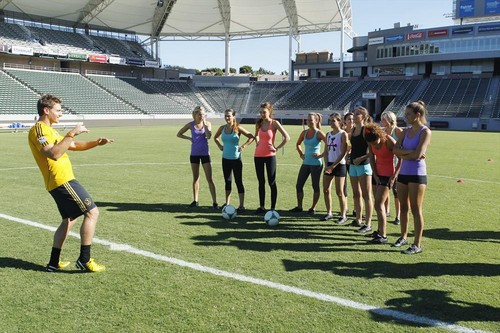 Tonight on ABC Juan Pablo Galavis continues his search for love on THE BACHELOR.  On tonight’s show the women face-off on a soccer field for Juan Pablo’s affection, love takes flight on the water, and one Bachelorette has an attack of extreme anxiety.  Did you watch last week’s episode?  We did and we recapped it right here for you.

On last week’s episode the 18 remaining bachelorettes moved into the mansion with hopes that they would end up as Juan Pablo’s soul mate and future wife. Every single bachelorette was out to capture his heart. However, the Bachelor had his first one-on-one date with Clare, a spunky woman who was surprised with a “winter wonderland.” Another individual date with Kat, found Juan Pablo jetting her off to Salt Lake City, Utah, to race in the “Electric Run.” Finally, 13 exuberant women showed a different side to the Bachelor, as they participated in a photo shoot to benefit the charity “Best Friends Animal Society.” Tensions ran high at the cocktail party as one teary-eyed woman second-guessed her decision to be away from her son.  By the end of the night, 15 women remained in the chase for Juan Pablo’s heart.

On tonight’s show Cassandra draws the first one-on-one date after deciding to stay and give love a chance with the dashing Juan Pablo and goes on a water adventure she won’t soon forget. Will the soccer world ever recover? A group of ten women get to share the Bachelor’s love of soccer, but when they are split into competing teams for his attention on the soccer field, the claws come out. Chelsie, who is afraid of heights, is pushed to the limit on the pivotal adrenaline date when Juan Pablo invites her to take part in a tandem bungee jump in Pasadena. The couple will be rewarded with a private concert by country music artist Billy Currington. And Juan Pablo surprises the women in the mansion by cooking them a classic Venezuelan breakfast. The jealousy between the bachelorettes grows as the Bachelor cancels the cocktail party in favor of a pool party, and the rose ceremony proves more challenging.  At the end of the evening, 13 women will remain  on the journey to become his soul mate and, hopefully, future wife.

The Bachelor Season 18 Episode 3 opens with the remaining 18 girls hanging out in the mansion waiting for their date card. Chris Harrison arrives, and delivers their first 1-on-1 date card. Juan Pablo chooses Cassandra Ferguson for his 1-on-1 date. Today is a big date for Cassandra and Juan, if there is no chemistry between them then Juan will send her home so that she can be with her son Trey. Juan sympathizes with her, because he has a four year old daughter of his own.

Cassandra and Juan head out in her date, he drives her in jeep that looks like an off-roading vehicle. Cassandra is shocked when Juan literally drives into the ocean. It’s not just any car, it’s a “water car.” It doubles as a motorboat. Cassandra is having a blast.

Back at the Bachelor mansion, Renee and Elise are spending some quality time. Elise confides in Renee that the reason she joined The Bachelor is because her mother wrote a letter to the TV show, stating Elise should join The Bachelor. So, after her Mom passed away she submitted the letter she wrote.

Juan and Cassandra climb out of the water car, and climb aboard a yacht. They strip down to their bathing suits and go for a swim together, which turns into a make-out session. After their time on the water, Cassandra and Juan head back to Juan’s house so he can cook Cassandra a romantic dinner.

Cassandra says “Juan Pablo makes her really nervous,” and gives her butterflies. This is the first time a man has ever cooked dinner for her. She can feel a definite connection to Juan Pablo.

Back at the mansion, the women receive another date card. Kelly, Renee, Sharlene, Danielle, Lauren, Alli, Christy, Lucy, and Nikki have been invited to “kick it” on a group date with Juan Pablo.

After dinner Cassandra shares some photos of her son Trey with Juan Pablo. He shows her some pictures of his daughter Camila. Juan thinks that Cassandra is a “great Mom.” He think she is “beautiful and funny,” and he likes that “she dances.” Juan Pablo presents Cassandra with a rose at the end of the night.

It’s time for Juan Pablo’s group date. He is taking the women to LA Galaxy soccer field. Juan was a soccer player until he gave it up when his daughter was born, and he feels at home on the soccer field.

The girls arrive at the soccer stadium, and Juan Pablo meets them on the field. Some of the girls are pumped to play soccer (like Alli, she has played her whole life), but the majority of them are not athletic at all. First, Juan Pablo sets some drills up so he can work the girls on their soccer skills.

Back at the mansion, Elise and Chelsie are discussing who they think will get the next 1-on-1 date. Elise is positive it is her and not Chelsie, because Chelsie is immature and Elise thinks she has a “definite connection” with Juan.

Back at the stadium, Juan divides the girls up into two teams, the Red Team and the Blue Team. Juan Pablo pays the part of the referee. Sharlene is getting the crap beat out of it, but Juan is impressed because he thinks she is “a good sport.” The blue team is losing miserably so halfway through the game Juan joins their team to “help them.”

After their soccer game, the women and Juan Pablo get changed for their after-party. Nikki scores some alone time with Juan first. Nikki confesses to Juan that her biggest fear about being on The Bachelor is “getting hurt.” She tells him that she really wants to get to know him, but it is really nerve-racking. Nikki thinks she is going to get the group-rose tonight. Andi and Juan sneak into the stadium’s kitchen for a make-out session.

The second 1-on-1 date card arrives and Elise is positive it is for her. It’s not though. Chelsie is going on the next 1-on-1 date with Juan Pablo. Elise thinks that Chelsie is too immature for Juan, she “seems like a baby.”

Juan and Sharleen head out to the center of the soccer field to get some alone time. The rest of the women watch from a distance while Sharleen and Juan kiss. Andi is not happy, she just made out with Juan.

At the end of the group date, Juan gives the group-date rose to Nikki.

Juan Pablo arrives at the mansion to pick up Chelsie for their 1-on-1 date. Delusional Elise thinks that Juan Pablo is more excited to see her than he is to see his date Chelsie.

Back at the mansion Elise is still complaining about Chelsie, she “doesn’t think she is a woman, she is a little girl.” She is confident that Chelsie is going to go home.

Chelsie and Juan Pablo head to a Venezuelan restaurant, so that he can introduce Chelsie to some Venezuelan food. He is really impressed with how adventurous Chelsie is. After lunch he takes her to the top of a bridge. Chelsie sees ropes and realizes that Juan Pablo has set a an appointment for them to bungee-jump. The instructor gives Chelsie and Juan Pablo a crash course in bungee-jumping and then straps them up. Chelsie is panicking when they walk out onto the platform, she is in tears, she is so terrified. Juan gives her a pep-talk, and Chelsie pulls herself together, and they jump off the bridge together.

After their bungee-jumping date, Chelsie and Juan head out to a secluded dinner. Juan thinks that Chelsie has “motherly instincts” and she would be a good step-mom because she “really cares about people.” Ironically, back at the Bachelor mansion Elise is STILL complaining about Chelsie, she is positive she would not make a good step-mom.

After Juan and Chelsie’s date, Juan presents her with a rose. Then, Juan Pablo surprises her with a surprise private concert from country singer Billy Currington.

The next day Juan Pablo arrives at the Bachelor mansion early in the morning to surprise the girls and make them a Venezuelan breakfast. The girls have no idea he is downstairs in the kitchen, he is excited to see the girls without make-up. Kelly heads downstairs first to walk her dog Molly, and is shocked to see him in the kitchen. She rushes through and barely says hi to him because she is wearing glasses and doesn’t have a bra on. Juan thinks Clare looks great in her pajamas. Juan decides that they should have a pool-party instead of a cocktail party before the Rose Ceremony. The girls put on their bathing-suits and head out to the pool with Juan Pablo.

The girls quickly start fighting for Juan Pablo’s attention. Kat steals some alone time first and the other girls aren’t impressed, Kelly thinks she is “acting like a whore.” Sharleen is scared that she may be going home tonight. She confides in Juan that she is tired of the cameras zooming in on her, and she “just wants to be left alone.” Juan comforts her and she bursts into tears.

Meanwhile back at the pool the other girls are trying to watch them through the bushes. They aren’t thrilled that Juan Pablo is kissing Sharleen. Clare heads upstairs and locks herself in the bathroom to cry. Sharleen thinks that Clare has “possessive” issues. Andi thinks Clare is a “ticking time-bomb.” Clare gets some alone time with Juan Pablo, and she confesses to him that she is having a hard time because she hasn’t been able to spend any time with him in a while.

Lucy and Christy have been eliminated from The Bachelor.