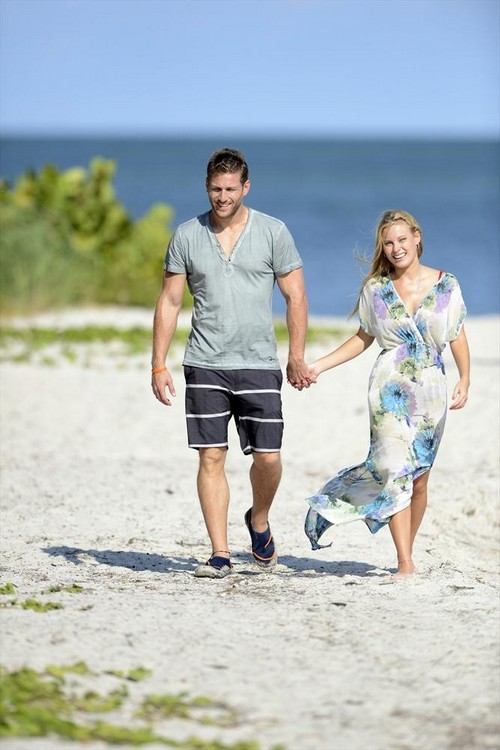 Tonight on ABC Juan Pablo Galavis continues his search for love on THE BACHELOR.  On tonight’s show the hometown dates loom as Juan Pablo takes the remaining six women on a hot tour of his Miami hometown.  Did you watch last week’s episode?  We did and we recapped it right here for you.

On last week’s episode Love bloomed in the lush island country of New Zealand as Juan Pablo’s adventure continued with the eight remaining women. Andi, desperate to get alone time with the Bachelor, claimed the week’s first one-on-on date. A group date for six bachelorettes took them on a wild ride on the Ogo – a New Zealand extreme sport that has the women zig zagging down a course in giant clear inflatable balls. After they caught their breath, the after party took place on the set of the Academy Award-winning film “The Hobbit.” Clare was still trying to repair her relationship with Juan Pablo. Finally, it is not just the Bachelor with decisions to make, which resulted in one of the most tension-filled rose ceremonies so far.  Six women will moved on to join the dashing Bachelor in his hometown of Miami as the women’s hometown dates loom.

On tonight’s episode as the six final women make themselves at home on South Beach, one bachelorette struggles with a decision she might have to make that would affect everyone on this adventure. After travelling around the world, Juan Pablo has a moving reunion with his daughter, Camila, and shares his growing feelings for one particular woman with his cousin. A week of “shock and awe” ends with Juan Pablo making a crucial decision about which four women will have the opportunity to take him home to meet their families.  The drama of the rose ceremony and the need to say good-bye to certain bachelorettes takes its toll on Juan Pablo. He is overcome with emotion and unable to celebrate with the four remaining women whose hometowns he will be visiting next week.

On tonight’s episode of The Bachelor Juan Pablo and the remaining six women travel TO Miami, Florida. When the girls arrive they receive the first date card, Juan Pablo has chosen Sharleen for a 1-on-1 date.

The other bachelorettes are shocked that Juan Pablo chose Sharleen for a 1-on-1 date, they don’t think Sharleen is really that into Juan Pablo. She told the other girls that she usually goes for nerdy, intellectual guys, and Juan Pablo definitely doesn’t fit that description.

Meanwhile Juan Pablo and Sharleen head out on their 1-on-1 date, Juan Pablo surprised Sharleen with a romantic yacht trip. Sharleen is excited because she thinks she may finally determine whether or not she and Juan Pablo are actually meant for each other. She confesses to Juan Pablo on the yacht trip that she has always put her professional life first, but she is ready for a change. Sharleen says that it has been a long time since she “clicked with a guy that way.”

Juan Pablo compliments Sharleen and tells her that she “doesn’t try hard to impress her, and that impresses him.” Juan Pablo feels great about their relationship and he is eally looking forward to going to meet her parents.

Sharleen confesses that right now lying on the boat “feels right,” but there is a tiny voice in the back of her head telling her that it is “not right.”

Back at the hotel, the girls are shocked that Juan Pablo and Sharleen are still out on their date, and it is so late. Nikki receives a 1-on-1 date card, it says “Nikki, listen to my heart beart.” The other women are annoyed, because Nikki just had a 1-on-1 date, and they don’t understand why Juan Pablo is giving someone so negative, so much attention.

Sharleen confesses to Renee that she is having doubts about Juan Pablo, and she doesn’t think it is fair to take that spot from someone who is sure that they want to be the one Juan Pablo chooses. Renee tells her not to do anything that she will regret for the rest of her life.

It’s time for Nikki’s 1-on-1 date with Juan Pablo, and he has a huge surprise for her. He is going to take Nikki with him to his daughter Camila’s dance recital, his parents will also be there and Carla, his daughter’s mother. Nikki is flattered that she is the first woman to meet Juan Pablo’s family, but she is also really nervous.

Back at the hotel, the girls receive another date card, it says “my hometown for yours.” The group date will include Clare, Chelsie, Andi, and Renee. Sharleen is still trying to decide if she is going to stay or leave before the Rose Ceremony.

After the dance recital Juan Pablo and Nikki head to the stadium where he works to lay catch and have a romantic dinner in the center of the field. Nikki asks Juan Pablo what his relationship is with Camila’s mother Carla, Nikki wants to know how Carla feels about him bringing another woman into his life. Juan Pablo explains that Carla wants him “to be happy,” and if Nikki makes him happy then she is happy.

After the date Nikki confesses that she wants to spend the rest of her life with Juan Pablo.

Sharleen sits down with the other women and confesses to them that she is “feeling conflicted” about Juan Pablo, and she is going to leave tonight. She knows that two women are going home tonight, and she doesn’t want to take someone else’s rose, that actually wants to be there. She hugs the other women good-bye and heads to Juan Pablo’s hotel room.

Juan Pablo invites Sharleen into his hotel room, and she sits down on the couch with him and tells him that she “doesn’t know if she can get to the place she is supposed to be at in three weeks. And, the idea of a proposal seems too soon her for.” Sharleen is about to cry but Juan Pablo seems to take it in stride and tells her that he understands. Sharleen says good-bye to Juan Pablo and heads out of the hotel, Sharleen has officially quit The Bachelor.

It’s time for Andi, Renee, Clare, and Chelsie’s group date. And, there is a twist, halfway through the date Juan Pablo will give one girl a Rose, and that girl will get some 1-on-1 time with Juan Pablo and the other three women will have to head back to the hotel.

Juan Pablo takes the four women on a private plane and they head to a secluded beach to spend some time together. Chelsie has brought along notes from her parents that they packed and sent with her, and she shares them with Juan Pablo. He thinks that Chelsie has a “great family.”

Andi breaks down when she is alone with Juan Pablo and confesses that she is really nervous about Hometowns next week, but Juan Pablo calms her down and reassures her that she doesn’t have anything to worry about.

Andi, Chelsie, and Clare discuss who they think will get the rose and a 1-on-1 date later tonight with Juan Pablo. Clare reminds them that whoever gets the rose in the one that Juan Pablo wants to spend the most time with and guarantees he will head to their hometown to meet their families.

It starts raining on the beach and Juan Pablo gathers all the girls to hand out the group date rose. He shocks Clare and gives the rose to Andi, Clare thought for sure she was going to get the group date rose. She thinks that Juan Pablo keeps choosing girls for 1-on-1 dates that don’t want to be with him. Clare, Chelsie, and Renee board the plane, and head back to the hotel, Andi stays with Juan Pablo for her date. Andi and Juan Pablo head out to a Latin Club together so that Juan Pablo can show her his dance moves.

Clare, Chelsie, Renee, and Nikki sit down at the hotel while Andi and Juan Pablo are out. Clare confesses that she is disappointed that she didn’t get a rose, but she is sure that the only reason Andi got a rose is because she needed some reassurance. Nikki tells Clare “that is stupid” and heads back upstairs. Clare follows Nikki upstairs and wants to know what her problem is. Nikki tells her that “she doesn’t like her, she has nothing to say to her, and she can be excused from her room.” Clare informs her that she isn’t leaving the room, because Nikki didn’t pay for it. Clare tells Nikki that she is a “piece of work.” And, Nikki tells Clare she is “f—-g crazy.” Clare storms out.

It’s time for the cocktail party, and it is super awkward after Clare and Nikki’s argument. Clare sneaks off with Juan Pablo to talk to him about her sisters back home. Andi and Nikki chat about how excited they are that this is their last cocktail party.

Chelsie confesses to Clare and Renee that she is not happy Nikki is still here. Clare is scared that Juan Pablo will end up choosing Nikki in the end and “get the wool pulled over his eyes.”

It’s time for the Rose Ceremony. Andi already has a rose so she has nothing to worry about tonight. Juan Pablo hands out roses to Nikki, Clare, and Renee. Chelsie has officially been eliminated from The Bachelor.