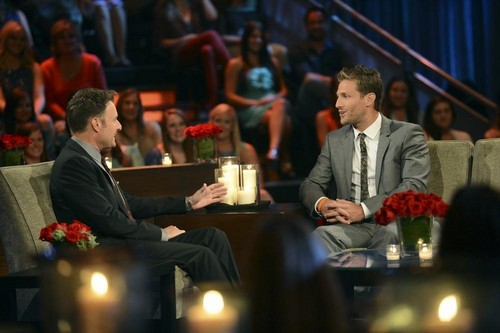 THE BACHELOR Sean Lowe returns to ABC tonight with a whole new episode.  On tonight’s show “The Women Tell All” is here and you know there is going to be a lot of back biting, cat fights and claws out.  Tonight Juan Pablo faces the women he rejected as fireworks fly and his controversial treatment of the Bacheorettes moves center stage.  Did you watch last week’s episode when the final 2 were revealed? We did and we recapped it for you HERE.

On tonight’s episode  Juan Pablo’s season has been one of the most controversial and buzzed-about in the show’s history. Viewers are locked in a heated debate about the handsome single dad. Many love this charismatic Bachelor — others are troubled about how he is treating the women. Tonight, the debate rages on as 17 of the season’s most memorable women, including Andi, Cassandra, Chelsie, Kelly and her dog, Molly, Lucy, Renee and Sharleen return to confront one another and Juan Pablo. So, what do the women really think of this Bachelor? Was he sincere about his search for a wife and stepmom for Camila? What about his kissing policy? And how do the women really feel about him sneaking off for a midnight swim with Clare? First, there is an update from the latest Bachelor happy couple – Sean and Catherine — and viewers will get a sneak peek at the Season Finale and the final two bachelorettes – Clare and Nikki.  When Juan Pablo steps into the hot seat tonight he is immediately confronted by all of the women.

Tonight’s episode of The Bachelor is a special Women Tell All with Chris Harrison, starring some of Season 18’s most memorable Bachelorettes, and Juan Pablo.

Before we get down to the Bachelorettes’ juicy tell alls, Sean and Catherine Lowe, Bachelor alums take the stage to discuss their wedding night (which aired last month on ABC). Chris asks the newlyweds what their wedding night was like, and Catherine chirps “fireworks…there were QUICK fireworks.” Apparently they had a close call on their honeymoon, when they were swimming with sharks a sting-ray “latched on to Sean’s man parts.” Fortunately, he only suffered slight bruising.

Next Chris Harrison introducers this season’s bachelorettes. He asks the girls what their first impression on Juan Pablo was. Renee confesses that she “doesn’t even remember night one.” And Kelly knew it was a red flag when her dog Molly ran right past him on night one after they climbed out of the limo, and didn’t like The Bachelor. Andy confesses that everyone thought he was hot when they first met him, but looks aren’t enough if you are looking for a long term relationship.

Chris asks the bachelorettes about Clare and Juan Pablo’s secret dip in the ocean. They honestly had no idea that Clare had snuck out in the middle of the night, they found out about it when they watched the episode air live.

Sharleen Joynt sits down with Chris Harrison to dish on why she left The Bachelor. Sharleen confesses that she “knew Juan Pablo wasn’t the one for her.” According to Sharleen they just weren’t connecting emotionally. She was shocked when she got home and watched the show and realized she was one of Juan Pablo’s favorite girls.

Renee Oteri sits down with Chris Harrison next, and he asks her about her “special connection” with Juan Pablo. Renee thinks that they definitely had a connection, and it “was really sweet.” Renee confesses that she was in love with Juan Pablo, and her feelings were definitely real. Renee confesses that she has dated since she left the show, and she is currently in a “situation” with someone and she is very happy.

Andi Dorfman joins Chris next to discuss her disastrous Fantasy Suite night with Juan Pablo. Andi explains that there was a lot of negativity, and Juan Pablo told her she had “barely beaten out Renee,” and the whole night all he talked about was himself. She also was disgusted that he actually had the nerve to rub in her face that he had already had an overnight date with Clare. Andi says that she closed her eyes in the Fantasy Suite and fake-slept so that the date would end. In Juan Pablo’s defense Andi says he was never actually mean to her, just the things that he said hurt her and made her feel cheap.

Now it’s time for Juan Pablo to come out and face his ex-bachelorettes. Juan Pablo says that he is happy to see all of the women and he is sure a few of them must be his friends still. Juan Pablo says he doesn’t have any regrets. Chris asks Juan Pablo why he thought he had to wait to kiss Renee, but he made out with Clare. Juan Pablo declares that Cassandra and Renee were his “special ones,” and he wanted to respect them. Cassandra calls him out and says that if he really cared about Renee and Ben, he wouldn’t have went on a hometown date and met him and then dumped his Mom. Juan Pablo doesn’t think there is anything wrong with meeting Ben, he introduced Nikki to his daughter. Andi thinks that Juan Pablo didn’t put the Moms above every one else, he just treated them a little differently.

Lucy reminds Juan Pablo that “this wasn’t a game, it was like a relationship, and every girl there wanted to be treated like they were in an equal relationship.”

Kelly calls Juan Pablo out about his anti-gay comments, and calling gay people “pervert.” She has a gay parent, and his comments really hurt her. Juan Pablo tells Kelly he will talk to her about it after the show, his words were completely taken out of context, and he “loves gay people.” Sharleen jumps to Juan Pablo’s defense and says that when they talked privately he was very open-minded, and she doesn’t believe he is homophobic.