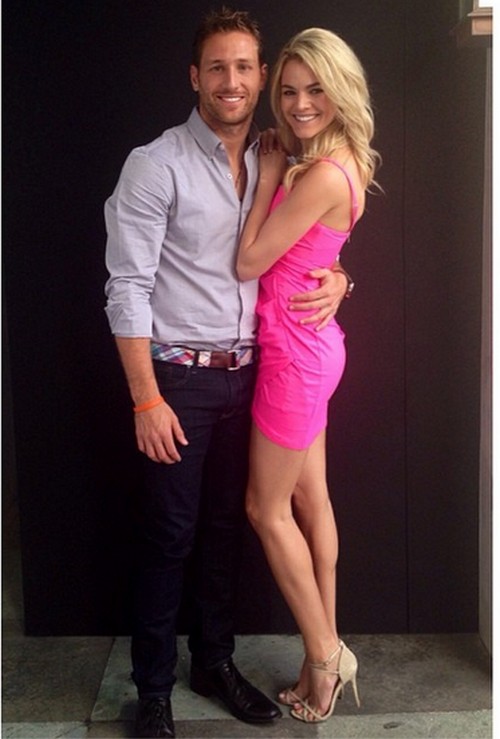 Juan Pablo and Nikki Ferrell are continuing on their relationship publicity tour, and their latest stop was Moet & Chandon’s ‘Tiny Tennis’ event with Roger Federer in Miami last Thursday. Look at that, they’re already partying in such prestigious company, and it hasn’t even been a month since the Bachelor ended. It looks like this is actually paying off for both of them, so what does that mean for their future together?

I think we can all agree on the fact that Juan Pablo and Nikki Ferrell’s ‘relationship’ is one large publicity stunt. No self-respecting woman would stay with a man like Juan Pablo, especially after the way he treated her on national television, unless there was something big in it for her. Fortunately, she and Juan look like they’re getting handsomely compensated to spend time together and make public appearances, so we can only assume that their relationship will also naturally progress forward.

Juan Pablo did not propose to Nikki on the season finale of the Bachelor, but perhaps they were waiting for a more financially rewarding offer to come through? They still have the ring that Juan was supposed to use, but what if he’s planning a giant, blow-out television proposal that will bring in even more publicity and cash? We already know Juan’s and Nikki’s primary goal with their relationship is to increase their fame and fortune, and what better way than to announce their proposal on live television? This way, they don’t have to get married [and then divorced], but can stay engaged and continue to rake in the cash for all their promotional outings.

What do you guys think? Juan and Nikki are already making quite a globe-trotting power couple, what with their Dominican Republic stop and then their appearances at events all over the U.S. Do you think it will all culminate in a televised engagement? Let us know your thoughts in the comments below.