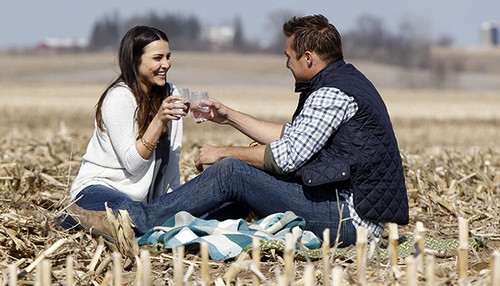 The Bachelorette Andi Dorfman returns tonight on ABC. On tonight’s episode the remaining four bachelors take Andi on tours of their hometowns. After meeting their families, Andi narrows the playing field to three final contenders.

On the last episode, the top 6 bachelors visited Brussels, where one contender discussed his childhood during a one-on-one date, and another man attended an outdoor concert with Andi. Elsewhere, a group date involved a visit to castle ruins. The six men arrived at Chateau de la Hulpe to await their fate at the rose ceremony. Everyone was hoping for one last chance to prove to Andi that she needed to come home and meet their families, however, her heartbreaking decision was a complete shock to the two bachelors she sent home; Dylan Pettit and Brian Osborne. The four very happy remaining men will return to the States and introduce Andi to their families. Did you watch the last episode? If you missed it we have a full and detailed recap, right here for you.

On tonight’s episode, Andi’s emotionally charged, whirlwind world tour to find love comes back to the U.S. as she travels across country to visit Nick, Chris, Josh and Marcus in their hometowns and to meet their families. Her spirit and resilience is about to be severely tested by the men’s loved ones as she tries to figure out if she can love more than one man at a time. Are all of these bachelors ready to be married? Andi will try and find out from the people who know them best, as she moves closer to making her fairytale come true. However, the fantasy is interrupted by a real-life tragedy as the group learns about Eric Hill’s heartbreaking fatal accident.

Tonight’s episode of The Bachelorette kicks off with Andi Dorfman arriving in Milwaukee, Wisconsin for her first hometown date with Nick Viall. He meets up with her at his favorite market, and decides to start their date there with some taste testing. Next they head to a Milwaukee brewery called Lakefront, where they have named one of their beers after the couple, “Nick and Andi.” At the brewery there is live music, and they attempt to dance the polka.

It’s time for Andito meet Nick’s family, and they arrive with flowers and gifts in hand for all nine of his siblings and parents. Andi knew that he had a big family, but hadn’t expected to meet all of his brothers and sisters and their husbands and wives and kids. After the blur of introductions, Nick’s family begin asking her a hundred different questions.

Andi sits down and has a 1-on-1 conversation with Nick’s sister Maria who is concerned that he is going to get his heart broken. She knows that Nick is in love with Andi, and she can tell that Andi cares about Nick as well. Andi also sits down with Nick’s youngest sister Bella, who is still in elementary school, and receives the third degree from her. In the end Bella approves of their relationship and she says she will accept Andi as a sister.

After their time with the Viall Family, Nick walks Andi out to the car and sees her off. He wanted to tell her that he loved her for the first time, but decided at the last minute not to, because he knows he isn’t going home and will have another opportunity to tell her.

Next Andi travels to Arlington, Iowa for her hometown date with farmer Chris Soules. Andi arrives at Chris’s house, and he gives her a tour of the inside. Andi is impressed that he has his own house, most of the guys she has dated lave lived in apartments or condos. They head outside and Chris gives her a ride in his tractor, and he even lets her drive through the field. Andi says that Chris is “Hands down the hottest farmer ever.”

While they are sitting in the corn field and talking about Chris’s family, an airplane flies over with a message that says “Chris Loves Andi.” Andi is totally blown away by the gesture and confesses that it is the sweetest thing any guy has ever done for her.

Now it’s time for Andi to meet Chris’s family. Chris introduces Andi to his parents Gary and Linda, and his three sisters and their husbands. They all sit down for dinner, and get to know each other. After dinner Andi sits down with his sisters and they brag about how proud they are of him and how he is a phenomenal business man and entrepreneur. Meanwhile Chris sits down outside with his Mom, and his mom is concerned about whether or not Andi would want to move out to Iowa and live on a farm. Chris hopes so, because he could see himself spending the rest of his life with her. Afterwards Andi Bonds with Chris’s Mom, and his mom says they are a “match made in heaven.”

Andi plays hide and seek outside in the dark with Chris and his siblings, and then it is time for Andi to leave and Chris walks her to her car. As Andi leaves, Chris reveals he is confident that he and Andi can work out their geography issues.

Andi travels to Tampa, Florida next for her hometown date with Josh Murray. Andi meets up with Josh and takes her to the baseball field, which is a huge deal for him. Since he gave up on his dreams of being a pro baseball player, he hasn’t been on a field for seven years. Afterwards he sits down with Andi and confesses to her that baseball used to be his life, but he quit after five years because he wanted to be there for his little brother Aaron Murray who is trying to get drafted by the NFL.

Now it’s time for Andi to meet the Murray Family, Josh introduces her to his parents Lauren and Dennis, and his brother Aaron and his sister Stephanie. Josh bursts in to tears because he is so excited to see his family, and he immediately sits down on the floor to greet his dog Sable.

Andi and Josh’s family sit down for dinner, and Andi is surprised that the entire conversation revolves around Aaron and his football career. After dinner Josh’s mom warns Andi that when Aaron goes off to play in the NFL, every Sunday is going to be spent at Aaron’s games and Josh’s life is going to revolve around his career. Andi is concerned that his family isn’t ready to let Josh move on and start his own family.

Josh sits down with his mom, and she can tell that he is madly in love with Andi. She encourages him to take some time for himself, and start a family of his own. After they all chat, the entire family heads outside and plays football together.

Last but not least, Andi heads to Houston, Texas to meet up with Marcus Grodd and meet his family. Marcus picks her up and takes her a “day in his life.” He drives her around Dallas and shows her some of his favorite places. They arrive at an empty bar and Marcus decides to dress up as a sailor and strip for her again, since it went over so well on their first date. Andi confesses that Marcus is “one of the hottest guys she has ever dated.”

Andi and Marcus head to his family’s house to get to know each other. His sister Kathy takes Andi aside and says that she is making Marcus “glow.” Andi brings up that Marcus wears his heart on his sleeve, and he confessed his feelings to her early on. She does has some concerns about how he fell so fast, and whether or not she can catch up to how he is feeling. Meanwhile, Marcus bonds with his brother outside and reveals that he is falling in love with her, his brother thinks that Andi is great and “down to earth.”

Marcus sits down with his Mom and she gives Andi and him her blessing, because she can tell that Marcus is in love. Before Andi leaves, Marcus tells her that he “truly loves her.” Andi thinks that life with Marcus would be a fairytale, and she knows that if she spends the rest of her life with him he will worship her and give her anything she wants or needs.

After hometown dates, Marcus, Chris, Nick, and Josh all head back to Los Angeles. They sit down with Chris Harrison and wait for Andi to arrive, he tells them that he has news for them. When Andi arrives Chris reveals to them that Eric Hill was killed in a paragliding accident while they were on their hometown dates. They all appear shocked and Marcus storms out of the room, Andi follows him and they cry on the front porch together. They head back inside, and the camera crew joins them in the room. One of the members of the crew tries to calm Andi down as she sobs about how horrible her last conversation was with him.

The next night it is time for the rose ceremony, Andi arrives at the Bachelor mansion and Chris Harrison greets her. She sits down with him and says she is “hanging in there.” Chris gives her a peptalk and tells her that everyone is hurting and she doesn’t have to be strong for the guys, everyone understand how upset she is over Eric’s death.

Chris, Nick, Marcus, and Josh line up, and Andi arrives to hand out the roses. Andi says a few words about Eric’s death and then prepares to hand out the final three roses. She drops the rose and heads in to the other room and starts crying and Chris Harrison chases after her and comforts her. After a few minutes Andi returns to the room and passes out the roses.

Andi hands out roses to: Josh, Chris, and Nick. Marcus Grodd has officially been eliminated from The Bachelorette.