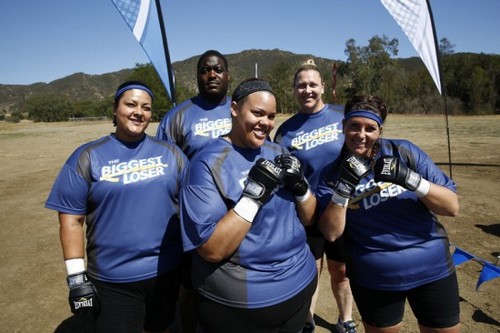 The Biggest Loser returns to NBC with an all new Thursday September 18, Season 16 Episode 2 “The Knockout.”  On tonight’s episode the players are challenged to break through “walls of excuses” and complete an obstacle course while carrying a punching bag. Later, Dr. Huizenga meets with each of the contestants to discuss the results of their medical exams.

Week two begins with the trainers and contestants getting to know each other and reveal more about themselves, with the exception of one player who refuses to talk about what led to her weight gain. This week’s challenge has contestants busting through “walls of excuses” and racing through an obstacle course while carrying a punching bag, with the winning team getting a prize that none of the players want to be without. Then Dr. Huizenga meets one-on-one with contestants to reveal the results of their medical exams and what the future holds if they don’t lose weight, leading one contestant to storm out of the room when the truth is too hard to hear. Later, the weigh-in at the ranch reveals which contestant will be headed to trainer Bob’s Harper’s “Comeback Canyon,” while the weigh-in at “Comeback Canyon” ends with one contestant leaving the competition for good.

The Biggest Loser season 16 episode 2 airs at 8PM on NBC and we will be live blogging it with all the up-to-the-minute details. So make sure to come back to this spot and spend the evening with us! Make sure to refresh often to get the most current details and updates!

On tonight’s episode of The Biggest Loser, the contestants are going to find out for themselves that losing weight is about much more than merely exercising. Not only do they have to learn the proper nutrition to maintain a new healthy lifestyle, but they also have to let go of the things that have been secretly holding them back on being healthy.

Emotional issues can be just as damaging as the extra hamburger they don’t really one yet will eat anyway. Week 2 is all about opening up and in order to get the contestants to start talking – trainer Jessie realized that the first story has to come from him. So he told them about dealing with his own separation. He has a son that he loves more than anything and because of his work he’s often separated from his son for long periods of time.

And some of the members on his team understood where he was coming from. They’re parents and being away from their children has affected them. But remembering their kids also serves to motivate them. They’re doing this show to be better and not for themselves. So far most of them feel like they failed their children by hiding indoors and so they actually want to be parents their kids will be proud of.

However there’s been a few roadblocks in getting people to discuss their personal lives. Blake, for one, was giving her trainer a hard time. When he tried to ask about her childhood – she would immediately close up and then oddly begin giggling. And Dolvett could only take so much of what he presumed to be inappropriate behavior. Either she’s serious about losing or she’s not.

So he kicked her out of the gym and told her to come back when she’s ready to talk to him.

She eventually talked to him but she didn’t so until he had talked with his team. He told them about himself and he mentioned a former Biggest Loser Winner who was once reluctant to speak. Yet the two of them managed to overcome their hesitation and was what got Blake to talk.

She grew up a big kid and there was time in her life that she had lost the weight. Sadly, she had gone on to re-gain it and subsequently then she’s always felt like a disappointment to her parents. Like she had come close to being the daughter they really wanted to only then fail. And then her anxiety started to flare up and she’s been having attacks ever since.

Later all three teams had to take part in the “Walls of Excuses” challenge. The challenged calls for them to race through a course carrying both added weight and consequently boxing through a wall of Styrofoam boxes that are supposed to act as their emotional barriers. Then once they finish with the course they have to string up the added weight also known boxing bag.

Whoever loses this challenge will also miss out on gym privileges. And no one wants to lose the gym. To do so will set their regimen back!

The Blue team had the most women and only one guy so though no one said it – they weren’t expected to win. And they lived up to that assumption. The White team were the ones that won but they had the chance to offer one other team the use of the gym. So they chose the Blue team seeing as no one sees them as a threat.

The Blue team were happy to use the gym though they didn’t like the way the White team pitied them. One of the members from the White team even slighted them by saying she would have preferred to work alongside up to her level. Hence the Blue team now have a goal in mind – they want to teach the White team a lesson!

As for the Red team, they continued to work out despite not having a gym. Their trainer had them working out with household products and surprisingly some of them found that workout to be harder than the gym. It definitely made them work up a sweat.

The contestants were called in to see Dr. Robert. Robert had to show them why it was so important to get them healthy but his tactics left some of them in a mess. He showed Rob a wheelchair that most likely would have been his future if he hadn’t come to the show. And Rob freaked out. He lost control of his temper and was screaming and crying at the same time.

The chair brought up a lot of feelings. His father has been sick and Rob knows he doesn’t want to end up like that. A few of the contestants have a family history of medical issues that resulted from weight problems. Take Scott for instance. His father and his aunt had diabetes and yet that’s where he was heading as well before he joined the competition.

So Dr. Robert showed him a version of an amputated foot. Sure, it brought back some memories but the important thing here is Scott’s health. He was repeating horrible patterns and needed a firm kick to get him on track.

Weigh-in is coming up and so the trainers have pushed all of the contestants into the hardest work-out of their lives. And that includes the women that were chosen to be in comeback canyon. Bob has been working with ousted contestants Andrea and Vanessa. The two ladies had to compete against each other to see who would get the extra week to work-out with Bob.

And the winner of comeback canyon was Andrea. She lost nearly twice as much as Vanessa did. So now all she has to do is wait on the final weigh-in with the regular contestants to see who she’ll have to compete against next week.

[10:01:59 PM] Kristine Francis: At the final weigh-in, the Red team loss a total of 52 pounds with only Emmy pulling it at a lackluster number. She lost 5 pounds which is less than she lost last week. Though none of that matters because the Blue team hasn’t been weighed yet and the White team ended up losing a total of 57 pounds.

Some would think the White team would have automatically been the winners of this week. Especially with those numbers. And to be fair no one saw the underdogs rising up this week. The Blue team would have essentially counted on a miracle – yet they met their numbers and passed their total percentage of weight loss which means they ended up being the winning team this week.

And truthfully they deserved it. One of the newest trainers on the block, Jessie, had a lot to prove and he already had to send someone home so this week both him and his team redeem themselves. As for the Red team, they chose in the end to eliminate Emmy because of her poor showing at the weigh-in.

Emmy and Andrea are going head to head next week in Comeback Canyon! Who will be eliminated next week!