BY Amanda Austin on May 22, 2014 | Comments: one comment
Related : Reality TV, Recap, Television 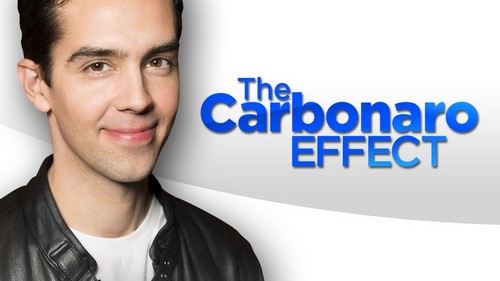 Tonight on TruTV is the return of The Carbonaro Effect with a new episode called, “Just Smash It Out.”  On tonight’s episode Michael poses as a regular car wash attendant pretending to break into cars by smashing the driver side windows shocking and making customers angry; but fixes their window miraculously.

On last week’s episode of The Carbonaro Effect, Michael Carbonaro made a shopper’s face appear on a milk carton and tried to convince her that she really was a missing person. Then, in a shipping store he had customers believing that impossible technology of the future had arrived, like a bowling ball that can be mailed in a flat box. Plus, he had a hotel guest questioning her identity when he swapped her ID, and stumped a valet when he does a disappearing act from his car.

On tonight’s episode Michael poses as a regular car wash attendant pretending to break into cars by smashing the driver side windows- obviously riling up the owners when they see the damage to their vehicles. Michael miraculously fixes the situation by simply rolling up a new window amidst the broken glass, leaving patrons baffled and amazed. Later on, Michael confuses dry cleaning customers when he is suddenly wearing their clothes in the blink of an eye.

Tonight’s The Carbonaro Effect is going to be hilarious, and you won’t want to miss it. So be sure to tune in for our live coverage of the new episode of The Carbonaro Effect — tonight at 10 PM EST! While you wait for our recap, hit the comments and let us know how know how you like the show.

Tonight’s episode of The Carbonaro Effect kicks off with Michael Carbonaro working at a car wash. A man pulls up with his car, and Michael informs him there is a scratch on the window. He smashes the window out and the man begins freaking out. Michael informs him that those are just “dealer windows” and every car comes along with four windows in the door and whenever one is smashed or cracked you can remove it and roll up the new window. The elderly man buys it hook, line, and sinker, and says when he gets home he is going to smash out all of his car windows.

A woman rolls up to the garage, and Michael opens her back door. He pulls a black mask, rubber gloves, duct tape, a wrench, and a bag full of cash out of the backseat. The paranoid woman can’t believe all of that was in her car and insists she isn’t a burglar. He offers to get rid of the evidence for her, but she turns him down.

Next Carbonaro goes to work at a dry-cleaning service. A woman walks in and says she is here to pick up the basketball jersey that was dropped off. He ducks below the counter and puts on the basketball jersey and then tells the woman she is going to have to come back later because it isn’t done. She agrees and walks out, and doesn’t even question the fact that he is wearing the jersey she wants to pick up.

Another customer comes in to pick up a blouse that she dropped off. He tells her he has to hand-steam it really quick. He dumps a liquid on his hands and his hands start steaming, he holds them over her blouse, and she watches in amazement.

Next Carbonaro goes to work at a pet supply store. He demonstrates a “grooming towel” for a women. He wraps a small dog in the towel and rubs him, when he removes that towel all of the dogs hair is gone and he is bald. The woman is amazed, he convinces her that there are different towels that cut different hairstyles. She thinks she wants the “lion cut” towel.

Up next a woman comes in to pick up her dog. He pulls out a disk and says it is part of their “Japanese Kenneling System.” He puts the disc in a canister and inflates it and then he pulls out the dog. The woman is in tears because she thinks the dog is dead, but he pulls him out of the canister. He hands the dog over and informs her she is on a television show with hidden cameras and just fell for a magic trick. She shakes her hand and introduces himself as Michael Cabonaro as she laughs hysterically.