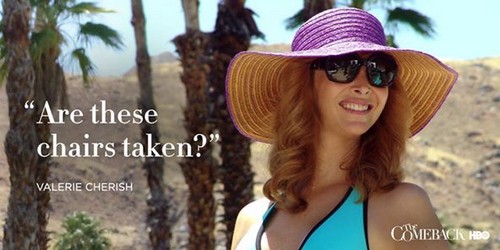 Tonight on HBO The Comeback returns with an all new Sunday November 9, season 2 episode 1 premiere called “Valerie Makes A Pilot.” On this evening’s episode, in the Season 2 premiere, Valerie [Lisa Kudrow] produces her own pilot for a reality show that she hopes will get picked up by a cable network, but discovers that her archenemy, Paulie G. [Lance Barber], has his own series in the works with a plot that sounds all too familiar.

On the last season 1 finale episode, After hosting a memorable coming-out party for the premiere of The Comeback, Valerie made an even more memorable guest appearance on The Tonight Show with Jay.

On tonight’s episode as per the HBO synopsis, “While shooting footage for a self-produced reality TV pilot she hopes will get picked up by Bravo, Valerie Cherish learns that her nemesis, Paulie G., is creating a series for HBO about a sitcom writer and his relationship with a neurotic older actress – a redhead named Mallory Church. After dropping in on Andy Cohen’s lunch, an incensed Valerie crashes the HBO offices to create a “table flipping scene” worthy of a Bravo show, as she tells them to cease and desist.”

Tonight’s episode airs at 10 PM EST on HBO and is bound to be full of all the typical twists and turns that we have come to expect from THE COMEBACK. We’ll be recapping it right here for you but in the meantime feel free to hit up the comments now and tell us your thoughts on season 2.

Tonight’s episode of The Comeback kicks off with Valerie filming footage for her big come back.  She has her camera crew editing footage from a year ago in to the montage.  She wants to “show the people what she has been up to.”  She plays it back for Mickey and he is confused why she included footage of herself starring in a low-budget horror film and running out of a house covered in blood.  Valerie explains it was from when she helped out college kids with an indie film.  Up next is a clip from when she starred in a hair-dye infomercial.  Valerie gushes that the infomercial makes her look like an entrepreneur like “that Bethenny Frankel girl.”

Mark shows up and interrupts their video montage, he is confused why they have a camera crew in the house.  He sees Tyler behind the camera and tells him to call his mother she has been looking for him.  Valerie explains to Mark that she is taping footage to send to Andy Cohen, “the Bravo guy,” because they have been in contact with each other.  And, by contact she means she tweeted him and he tweeted her back.

A clip of Valerie having lunch with Lisa Vanderpump comes up on the laptop and it looks like a horrible Housewives audition.  Valerie freaks out and says that she can’t show the clip, which clearly says “Property of Bravo” on it.  Mickey agrees that Andy definitely doesn’t need to see that clip.

Valerie moves on to filming phase 2 of her tape for Andy Cohen, and her publicist Billy shows up and interrupts.  He has Karla in his car, one of his new clients from Top Chef.  Billy breaks the news to her that HBO is writing a show about Paulie G, a struggling sitcom writer who was sleeping with an actress with red hair named Mallory.  Valeria assures Billy that Paulie is in the past and he is free to write whatever he wants to write.  Billy tells her to find a copy of the script to see what kind of damage he is doing to her reputation.

Valerie heads to bed with Mark and the script, and is furious when she reads it.  She screams to mark that the script is totally about her.  Mark says he is going to call the lawyers in the morning and let them handle it.

The next day Valerie, Mickey, and her film crew hit the drive thru at Sam’s Burgers.  After struggling with orders they opt to go to a restaurant instead.  The hostess refuses to let them in with the cameras, but she sees Andy Cohen sitting at a table.  She ditches the cameras and her crew follows her with their cell phones.  She crashes Andy Cohen and Ru Paul’s lunch and tells him that she is working on some footage to send to him.

As they are heading to the car, Valerie whines to Mickey that she should have made a bigger scene with the hostess to make the footage more exciting.  When they are leaving the restaurant they are nearly trampled by paparazzi.  Val realizes that is because Juna is coming out of the restaurant behind her.  While Valeria makes plans to hang out with Juna in four months, the paparazzi knocks over one of her camera guys.  When they get back in the car Valerie receives an email from her lawyers telling her that they sent HBO a cease and desist letter.

Val heads to HBO’s office and plans to “flip a table or two.”  The lobby is full of red heads preparing to audition for the part of Mallory.  A woman named Sharon comes downstairs and takes her up to the casting room where Paulie is sitting with a few other execs.  She hugs him and then tells him that she is not happy and they need to cease and assist.  They explain to Valerie that they reached out to her assistant to see if she wanted to audition but her agent never returned their calls.  They convince Valerie to audition for the part, she whines that she doesn’t do cold reads well, but after some persistence agrees.

Back at home Val is lecturing her film crew about turning the cameras off, they missed her phone call from her agent.  She decides to try and reenact the call.  Mark arrives and Valerie informs him that she landed a part in Paulie G’s new show about her.  Mark argues that she can’t be in the show because they are suing them and tells her there is “no fu—-g way” and storms off.