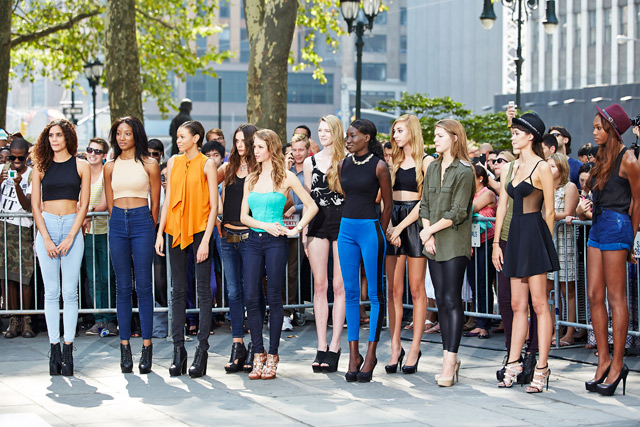 Tonight on Oxygen their reality show THE FACE returns with its second season with executive producer Naomi Campbell as a supermodel coach along with two new supermodel coaches, Anne V and Lydia Hearst.  Host Nigel Barker will take on a new expanded role for the second season, serving as a confidante and advisor to the 12 supermodel hopefuls.

The Face gives viewers unprecedented access inside the world of the fashion industry as three teams of aspiring modeltestants, each led by a supermodel coach, are guided through real life assignments, including photo shoots and commercials. Throughout the series, the supermodel coaches mentor young hopefuls using the lessons and skills they have learned to guide their teams through challenges that accurately depict what it takes to have a career as a model and be the face of a brand.

We will be live blogging The Face tonight with all the up-to-the-minute details at 10 PM EST so make sure to come back to this spot and watch the show with us. While you wait for the recap hit the comments and let us know what you think of all the changes they have made to The Face this season?

This season of the “The Face” the ladies are competing in NYC to be the face of Frédéric Fekkai Hair Care Line. On top of working with a legendary brand the ladies will also be featured for an exclusive story in Elle magazine. But that kind of exposure comes with a price – these ladies have to be prepared to give it their all no matter what the occasion is. Like say the first day.

Nigel informed the women that they will be walking the runway. Like the illustrious Naomi Campbell said “before they build you up, they have to tear you down”. Naomi is joined by this season’s newest judges supermodels Anne V. and Lydia Hearst as they watch a crop of newbies strut the runway in nothing other than their underwear.

There were some obvious stars along with glaringly blatant failures. Yet on that performance alone the judges have to choose who they want to mentor on their teams. There are 12 ladies in all and the judges are only allowed to pick four each. So of course they were going to fight over the best. It’s not like anyone wanted to choose that girl that looked like she was climbing steps on the runway.

But apparently Lydia has a soft spot for the ugly ducklings. She thinks she can turn them into swans while the other two judges stick to wanting the cream of the crop. This leads to problems like in one case involving Kira. Anna V and Naomi both wanted her although Anna chose to use their Russian connection to try and get her.

In the beginning, Kira had originally wanted to be on Anna’s team for that very same reason but changed her mind once she realized she could work with Naomi instead. She was more ambitious than she was patriotic. Anna didn’t like that.

The second challenge of the competition is a window display for Juicy couture. The ladies have to sell the idea of “A Girls Night Out” to a potential client. So they have to pick what they’ll be wearing and come up with a concept. Several teams had trouble doing this. Team Naomi appeared to need their hand held by Naomi herself while Team Lydia seemed to be in disarray. Fortunately for team Lydia, their mentor knew how to deal with the problem without chastising them. The same can’t be said for other people.

Naomi felt let down by her team. They weren’t in bright colors which she though everyone knew was a signature for Juicy couture. Then they didn’t have a concept. Kira tried implementing one but the rest of her group chose to ignore her. So they had to come up with something on the fly to please Naomi.

They should have learned  from her maids – only perfection can please Naomi! They stumbled during their display and Naomi to call on the culprit for ruining it. Now they just have to hope they were better than everyone else.

The winning team will be safe but the losing teams will each have to pick a contestant for elimination.

Team Lydia weakest’s link was Allison. The client didn’t like how the model came out with a perfume bottle. Otherwise he loved her team and found Anne V’s team confusing. He said he couldn’t understand the story. Still the winner turned out to be Team Naomi.  He was able to overlook one of the models stumbling because he loved the concept of a group taking a selfie. Even Naomi was surprised her team won.

The concept and the styling was all done by the ladies; not by Naomi!

A little unfair seeing as the other judges are left to picking who would go up for elimination. That’s why neither of them chose to throw in their weakest player. Lydia had given that perfume bottle to Allison and it would be unfair to punish her for taking order. Then over at  Anne V’s team she couldn’t sacrifice her weakest member over a smile the client didn’t like. That’s why she chose Isabelle. Isabelle is one of her best contenders and Naomi would go easier on her since she wanted Isabelle to be on her team.

So it’s not going to be an easy decision for Naomi because both of the women were strategic in their picks. Ray is inexperienced and Isabelle is fierce. The final decision though shouldn’t have rested on Naomi who is essentially competing with the other teams. She didn’t like how Anne tried to play hardball and went with dishing up some of her own.

Naomi eliminated Isabelle who was one of the strongest models in the competition. But did she do it to give her team a greater chance?