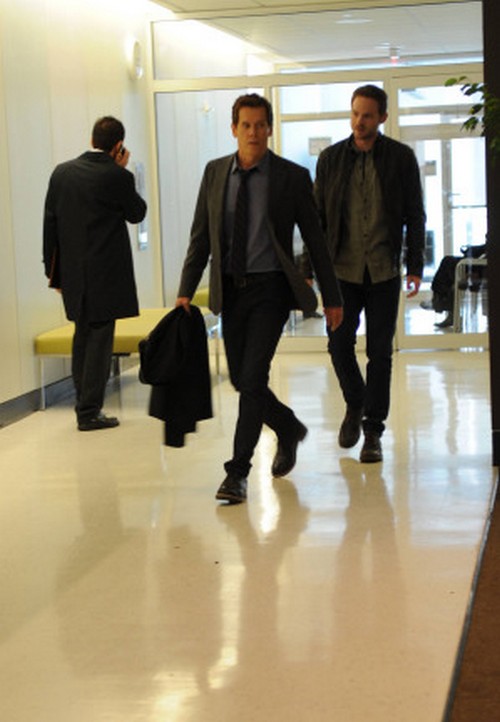 Tonight on FOX their hit psychological thriller THE FOLLOWING airs with its season 2 premiere called, “Resurrection.”  If you have not watched the show before this season the show catches up with Ryan Hardy in the wake of a horrific new murder spree. The FBI calls on Ryan and Mike Weston to speak with the lone survivor, Lily, in order to help them solve the case.

Ryan is reluctant to re-engage with the FBI, but finds a valuable ally in his niece, Max Hardy an NYPD cop working in the Intel Division. As the investigation proceeds, Ryan crosses paths with several complicated individuals, including Luke and Mandy Lang, which furthers his suspicion that Joe Carroll’s reign of terror is far from over.

On tonight’s show one year after Ryan Hardy’s pursuit of serial killer Joe Carroll, a healthy and healed Ryan is living in New York City. On the surface, it appears Ryan’s gotten his life back together. But deep down, his obsession with Joe continues to grow. Then, on the anniversary of Joe’s death, a new murderous rampage leaves everyone shocked and determined to discover the truth.

We will be live blogging The Following Premiere with all the up-to-the-minute details at 9PM EST (could be later because of the NFL game) so make sure to come back to this spot and watch the show with us.   Make sure to refresh often so you get the most current info!  While you wait for the episode you can catch a sneak peek of tonight’s episode BELOW!

The Following begins with Ryan Hardy waking up in a hospital bed. The show then jumps to one year later, with Hardy catching the morning news after a run. They are discussing the one year anniversary of the murder of Claire Matthews. Next, Ryan is at a support group, where his sponsor encourages him to open up at the sessions. Some time after, Ryan teaches a class and they discuss how to figure out a murderer’s m.o. Later, Ryan has dinner with Max, her boyfriend, a support group member, and Ryan’s sponsor. In the kitchen, Ryan thanks Max for having the dinner party and for giving him a distraction from the anniversary.

The next scene takes place at Union Station. Three men appear on the train wearing masks. They cry out “Resurrection!” and proceed to murder everyone on the train by stabbing them. The men continue to say things like “the resurrection is coming” and “even Ryan Hardy can’t stop us.” One woman escapes the train alive.

Ryan awakes the next day to learn of the murders on the news. Mike is watching the morning news also, when the FBI arrive at his home to talk to him. They want his help with the subway murders. Next, a young woman smiles at a handsome stranger in the hallway of her apartment building. When she arrives upstairs, the handsome stranger is waiting on her. He smiles at her. Next, Ryan arrives at his classroom to find the FBI waiting on him. Then, Mike, and the FBI detectives are at the scene of the subway murders. Back at the young woman’s apartment, the stranger has strangled the woman and is lying in her bed next to her body, talking to her as if she is still alive. He asks if she has anything to eat, then gets up and offers to make a spinach omelet.

The show flashes back to eight months earlier when Ryan and Mike had a meeting at a bar. Mike is trying to talk to Ryan about that night at the lighthouse but Ryan is very drunk and doesn’t want to talk about it. Back to present day, the FBI detectives question Ryan about anything he could tell them that may help solve the subway murders. Then, the detectives, Mike, and Ryan interview the lone survivor of the subway murders in her hospital room. When the dectives ask if the killers said anything during the attack, she tells them they said “Resurrection is coming” and “Ryan Hardy can’t stop us.” The victim then looks at Ryan and says, “I take it you are Ryan Hardy.” They have a moment then Ryan, Mike, and the detectives leave. Meanwhile, the stranger is now dancing with his dead victim at her apartment. He then puts make up on her and dresses her up. Next, he takes a shower. After telling the dead body he needs help moving her, he returns to the bathroom where he tells someone in the shower that he needs help moving “Heather,” the victim. The person steps out of the shower which reveals that the two men are twins.

The media continues to suggest that the subway murders were the doings of Joe Carroll’s cult followers. Ryan, Mike, and the FBI agents are at the station watching surveillance videos of the subway murders. Mike does a body scan of the murderers and matches one of the followers, Carlos Perez. The other two are not identified and Mike suggests they are new to the cult. One of the agents asks Ryan his opinion, he says he doesn’t really know what to tell them and asks to go home. The agent dismisses him. Mike catches Ryan in the hall to try to convince him to stay and help with the case. Ryan refuses. He arrives at his apartment and enters a room filled with photos and timelines that reveal he is more interested in the case than he appears.

Later, Max arrives at Ryan’s to discuss the case. He has her research Carlos Perez and they learn that he is using a new alias, Robert Diaz. Max encourages Ryan to stop trying to catch the rest of The Followers on his own. He asks her to lock up when she leaves, then he goes out to find Carlos Perez. Ryan arrives at an apartment where he catches Perez off guard. He holds Carlos at gunpoint and demands Carlos to tell him where Joe Carroll is. After insisting Carroll is dead a few times, Carlos tells Ryan he hasn’t seen Joe since he picked him up at the lighthouse. Carlos says that Joe “got out” and no one has seen him since. Ryan accuses Carlos and the other followers of trying to lure Joe Carroll out of hiding. Carlos then breaks free of Ryan and runs. Ryan chases him through the streets until Ryan is hit by a cab, ending the chase. The cab driver offers to call an ambulance but Ryan refuses and runs off.

Meanwhile, Carlos arrives at a hotel where a woman is waiting. Back at Carlos’ apartment, Ryan is searching the place for clues that might lead him to Joe Carroll. He calls Max and asks her to search a girl named Heather Clark. Max tells him that Heather’s body was just found a few minutes before. Ryan arrives at the crime scene where Heather’s body had been propped on a park bench to appear as if she is reading a book. Mike asks what Ryan is doing there, then Mike begs Ryan to tell him anything that could help Mike find Joe Carroll. Mike tells Ryan that he’s tried to call him and that he’s needed him in the last year. He tells Ryan how he’s gone over that day at the lighthouse over and over again, trying to figure out what they could’ve done differently. He asks Ryan again to help him. Once again, Ryan tells Mike to take care of himself, then he leaves.

Later, Carlos and the woman are watching the news at the hotel when there is a knock at the door. It’s the twins who murdered Heather Clark. Their names are revealed to be Luke and Mark. The twins asks Carlos what the police might know. Carlos begs the twins not to do anything to him. Luke says that Carlos is free to go after Carlos gives him a hug. “I don’t want to really give you a hug,” says Carlos. This makes Luke angry so he laughs and then give Carlos a back hand chop to the throat. Luke laughs as Carlos falls to the bed, gasping for air. The woman and Mark give Luke a look and he just says, “He’ll live.” Meanwhile, they discuss Ryan Hardy finding the apartment.

Elsewhere, a bearded man walks outside of his home while a young woman is watching the news in the living room. She calls him back into the house to see the news report, which is about the subway murders. When he steps back into the house, we see that the man is Joe Carroll.