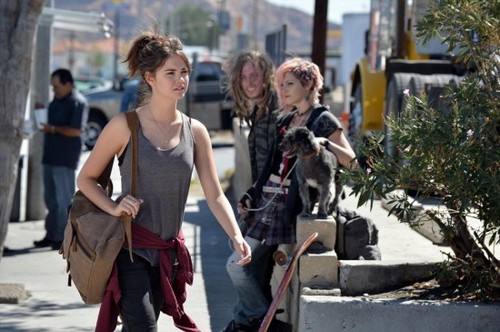 Tonight on the ABC Families their new drama, THE FOSTERS returns tonight with its winter premiere called, “The Honeymoon.” On tonight’s show Stef and Lena’s parents arrive amidst a frenzy of wedding-planning.  Did you watch last week’s episode? We did and we recapped it here for you.

On last show before the hiatus Stef and Lena tried to maintain calm when their parents descended on the Foster house for a very special celebration. Lena’s dad, Stewart had agreed to officiate the ceremony while her mother Dana and Stef’s colorful, talkative mom Sharon, attempted to keep things civil while disagreeing on floral arrangements. Sharon tried to strong-arm Frank into attending. Stef avoided telling Lena she planned to return to work as soon as she was cleared. Meanwhile, when Callie’s case against Liam boiled down to her word against his, she had to decide whether or not to lie in order to get some justice out of the situation. Callie and Jude got some news they’ve been hoping for, but Callie made an emotional slip that would destroy any chance they finally had at happiness.

On tonight’s show the repercussions of Callie’s decision to run away impact every member of the Foster family, including newlyweds Stef and Lena, who had offered to adopt the troubled teen. Both Jude and Brandon struggle with their own personal guilt about her running away. Mariana inadvertently discovers the whole story about Lexi’s upcoming trip to Honduras.

Tonight’s season 1 episode 11 is going to be an exciting one that you won’t want to miss, so be sure to tune in for our live coverage of ABC Family’s The Fosters tonight at 9 PM EST! While you wait for our recap hit the comments and let us know what you think of The Fosters season 1 this year. Check out the sneak peek video of tonight’s show below, while you wait for the recap!

Mrs. and Mrs. Foster are caught up enjoying their honeymoon stage. After all it’s only the day after. Stef’s mother, Sharon, has been helping out the family cleaning up post-wedding and she’s been in charge of the kids. Yet no one knew Callie was missing. Brandon had tried to question it when he didn’t see her at breakfast, but Jude covered for her by saying she was at guitar practice.

Sharon waited until she had a minute alone with her daughter before she addressed what’s been concerning her. She wanted to make sure Stef had full thought it through about the whole adoption thing. She just wanted to point out that Stef and Lena already have their hands full with three kids. Could they afford to take on two more? Stef thinks so. She reassures her mother that they did think it over and they wanted to go through with it.

As for Callie, she’s on the road with Wyatt. Wyatt is meeting up with his family and before he gets there he double checked with Callie that he wasn’t harboring a fugitive or anything.  She didn’t tell him the truth, but she did admit she couldn’t go back home. She told him that she didn’t want to enter the system again and pretty soon that’s exactly were the Fosters were going to send her.

Jude and Brandon were alone when Brandon started asking questions. He needed to know if Jude would tell anyone what he saw and Jude, being smart, realized that Brandon was just covering his bases. Jude told him he wasn’t going to tell.  He didn’t want to ruin the family they were creating, but if Brandon thinks he’s going to start dating Callie then he’s wrong. Brandon could try to come up with all the excuses he wants. In the end he’ll merely be another version of Liam to Jude.

Mariana and Jesus have been fighting over Lexi’s time and attention. They know she’s being going away although they think it’s only for a couple of weeks. In the short time they have her for, Jesus wants to make out with his girlfriend while Mariana wants some BFF time. Mariana hates feeling excluded and when she tried to tell Lexi how they were making her feel; her friend couldn’t understand. She thought Mariana would get it if she ever had a proper boyfriend.

Jude was the one to finally notice Callie’s guitar was still at the house. He really thought she had gone to practice. It wasn’t until he searched her closet and drawers that he learned she ran away. Afterwards he quickly alerted the rest of the house. Lena and Stef don’t know why Callie ran away.  It’s a mystery to them. And they can’t even call the police to make a report. That would risk Callie’s probation.

Lena had called Wyatt. Before it was an easy choice for him to buy Callie’s story.  After that call though, he was worried Callie was throwing away a good thing. He understands she’s natural suspicious of people and felt maybe she just needed to stop pushing people away. And so he called Stef and Lena to come pick her up from the motel they were staying at.  Sadly the parents never got the chance to talk to her seeing as she ran away again when she spotted them talking to Wyatt outside.

Back at home, Mike is left defending the home front. Sharon had to catch her flight back home. Still before she left, Sharon told Stef that no matter what happens with Callie the family should keep Jude. He’s too good of a kid to get set back. Without either Sharon or the newlweds, Mike is stuck running around as if he’s a chicken with its head cut off. He struggles with making the lunches and then doing the school runs once the car broke down. As far as he knows Stef and Lena have found Callie and are bring her back home. He doesn’t know that he’ll have to stay on at the house longer than he thought.

Mariana had to learn from her teacher that Lexi was moving. She found out when he gave her different project partner. She was thrown as to why seeing as Lexi was supposed to be back in a couple of weeks when he said it was because Lexi wasn’t coming back. Normally she would have freaked out or made the situation about herself. This time though she decided to arrange a proper goodbye for Lexi and Jesus.

It’s only later that the rest of the family heard Callie ran away for the second time. It was left to Mike to be the one to tell the kids. Jude couldn’t take the being around everyone else and ran off only to have Brandon follow him. Brandon had thought at first Callie ran away to be with Wyatt and now he thinks it might have been his fault. Jude tells him it’s not. He was the one to call Callie selfish and accused her of always ruining things for him. Jude regrets being so harsh now.

Callie tried to get a job and couldn’t without none of these three – identification, a phone number, or an address. Her would be employer did warn her however that maybe she should call home.  She then tried riding around on the bus for several hours but that couldn’t work for long. The bus had to come to a stop sooner or later. All the same she did run into a nice prostitute. The opportunity allowed her to borrow the girl’s cell phone. Callie thought she should attempt to reach her dad in prison. She didn’t know that he was released over a year ago.

Disappointed and needing a place to sleep, Callie intentionally went into a corner store and began eating whatever she could. She did it with full knowledge that clerk was going to call the cops. He had even warned her. Guess she would rather be in jail than to go back home.