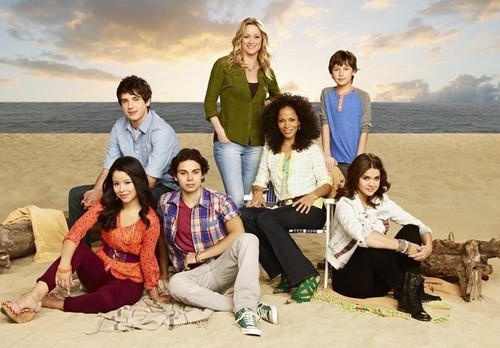 Tonight on ABC Family their hit drama The Fosters returns with a new episode called “Take Me Out.” On tonight’s episode Brandon considers having hand surgery, and Stef’s opinion on the matter conflicts with Lena’s. Meanwhile, Stef questions Mike about Ana’s disappearance; a stranger takes an interest in Callie; and Connor’s dad jeopardizes Jude and Connor’s friendship.

On the last episode it was a big day for Callie as her future with the Fosters hinged on the revelation that Donald was not her birth father. What happened next could threaten to separate Callie and Jude once again. Brandon struggled to recover and came to terms with his guilt over sleeping with Dani, and big questions still remained about what Mike was up to the night Ana disappeared. Meanwhile, Jesus and Emma’s relationship impacted Emma’s standing with her teammates, which caused tension between them. Mariana had made a big change, much to Stef’s dismay. The episode was written by “The Fosters” Executive Producers Bradley Bredeweg and Peter Paige and directed by Norman Buckley.  Did you watch last week’s episode?  If you missed it we have a full and detailed recap, right here for you.

On tonight’s episode Brandon contemplates a big decision that could either restore or destroy his dream of playing piano, but Stef and Lena find themselves on opposite ends of the debate. The Foster siblings plot to cheer Brandon up by taking him out to see a band and he butts heads with the sexy lead singer Lou (guest star Ashley Argota). Meanwhile, Stef confronts Mike about his whereabouts the night Ana disappeared. A mysterious stranger keeps tabs on Callie, and Callie is faced with a choice that could further complicate her life. An encounter with Connor’s dad creates a rift in Jude and Connor’s friendship. And Jesus begins to feel threatened by Emma’s independent spirit. The episode, titled “Take Me Out,” was written by Megan Lynn and Wade Solomon and directed by Elodie Keene.

The second episode of the season begins with Stef comforting Brandon who is having difficulty sleeping. Brandon fears that he will never be able to play piano to his full potential again. Stef reassures him and tells him not to give up. Their heart to heart seems to hit home with Brandon as he decides to get the surgery on his hand to repair the nerve damage. Stef is unpleasantly surprised to hear that her son is willing to risk permanent hand damage by going through with the surgery.

Later, Jude decides to go to the batting cages with Connor and his dad. As a newbie, he struggles with hitting the ball as he overhears Connor’s dad’s incessant criticism of Connor. Jude later finds that Connor’s dad does not want the two to be friends because he thinks Jude is gay.

While at Mike’s house, Stef chats up Dani for information about the night that Ana went missing. She tries to subtly (but not subtly enough) extract information from Dani. A distraught Dani is brief with Stef and says that she’ll need to speak with Mike personally if she wants to discuss his sobriety.

The strange man from the previous episode appears at Callie’s work once again. While eating, he tries to small talk with her about food. During the casual conversation, Callie slips information about her “two moms.” Later her coworker finds a $100 bill in the tip jar and assumes that it must’ve been the man who left it.

Back at home, Lena, Stef, and Callie learn that Robert Quinn is refusing to sign the adoption papers until a DNA test is done that proves Callie is his daughter. Apparently, he is a hot shot business man with some money that he doesn’t want Callie to touch. Callie goes through with the DNA test but Robert never shows. She admits to Mariana later that she is hurt by him not showing and wishes she could meet him.

During dinner, Stef puts her foot down on her decision to prohibit Brandon from getting the potentially dangerous hand surgery. Stef’s decision upsets both Brandon and Lena. After Brandon storms off, it is clear that Lena is hurt by Stef’s choice to make such an important decision without her. With some tension in the air, the pair later discuss Lena’s recent run-in with Timothy who is now on the search committee for the new principal. Stef asks Lena if it is the best idea for her to be principal at this time. Lena confirms that obtaining the principal position is what she truly wants.

Mike interrupts Stef and Lena’s conversation with an unannounced visit. He confronts Stef about her attempt to get information from Dani. Stef questions Mike about what really happened in the bar that night. Mike reluctantly admits to having been part of a bar fight but that he never saw or spoke to Ana. Insincerely, Stef apologizes.

The Foster kids and Emma head to see a local band play. Brandon is mesmerized by the lead singer of the band. After the show, the guitarist approaches Brandon for his honest opinion of their performance, musician to musician. Brandon provides some constructive criticism in which the lead singer responds defensively. Even so, the guitarist invites Brandon to come play with them. Back at home, Brandon continues to be intrigued by the band (particularly the sassy lead singer). He searches for more information about them online and listens to some of their music.

Emma and Jesus’ relationship gets steamier in the backseat of a car. Unfortunately, Jesus did not find Emma’s controlling and independent ways attractive during this encounter. As she tells him what to do, one command after the other, Jesus becomes fed up and ends the night before they got any further. The two later talk about doing it the right way another night. Jesus has a night planned but Emma continues to want things her way. Jesus tells Emma that she can be bossy. Emma doesn’t take it well, leading to a confrontation that may be detrimental to their relationship.

At home, Lena tells Brandon that she supports his decision to get the operation. Stef overhears and confronts Lena about undermining her. The parents argue as they each stand on opposing sides—Lena believes Brandon should have the right to choose while Stef wants to protect Brandon from further disappointment.

Meanwhile, an Internet search leads Callie to more information about her father. What she finds is the realization that the strange man who has been dining at her work is her father. Soon after, Robert Quinn visits Callie once again. Callie confronts him and he apologizes. He tells her that the DNA test was all his family’s idea and that he didn’t know she existed. Robert hands her a letter. Callie later reads her dad’s letter. Surprisingly, the letter is actually from her estranged sister, Sophia, along with a photo. Callie is shocked as she stares into a picture of a sister she never knew.

Inspired by the recent show, Brandon begins playing the piano again. Stef and Lena decide that they will look for more information and options for Brandon’s surgery; however, Brandon changes his mind and now wants to wait to see if his hand will recover without the surgery.

At the police station, Stef hears news that a body has been found with no ID just yet. Could the body explain Ana’s recent disappearance?