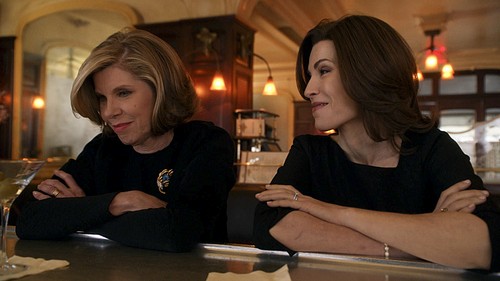 Tonight on CBS The Good Wife returns with another dramatic episode.  In “A Material World,” Alicia and Diane consider merging firms as they continue to cope with Will’s death.

On last week’s episode  Matthew Goode returned as Finn Polmar, Star Prosecutor in the State’s Attorney’s Office.  Alicia searched for answers as she tried to make sense of Will’s death in the aftermath of the courthouse shooting. Meanwhile, Diane delivered the somber news to the partners at Lockhart/Gardner who had to decide how to move forward.

On tonight’s episode Jason O’Mara Guest Stars as Lockhart/Gardner Lawyer Damian Boyle.  Alicia and Diane consider merging their firms in the wake of Will’s death, even as they find themselves on opposite sides of a contentious divorce suit. Meanwhile, Alicia offers assistance to Finn when it becomes clear that the State’s Attorney is looking for a scapegoat in the Jeffrey Grant case

Season 5 episode 16 looks great and we’ll be updating it live for you beginning 9PM EST. While you’re waiting for the drama to unfold hit up the comments and let us know what you think of the season so far!

Diane and Alicia are plotting again and even though they did this after a few bottles – they’re still bent on working together again.

They had just come back from Will’s funeral and needed a pick me up so they stopped by a bar. Then they got to drinking. And suddenly they soon found themselves flushed with great ideas such as possibly merging their firms. Because why not? Surely, there would only be benefits. Or so they thought.

Currently both firms are overdrawn and that’s why the ladies thought merging would solve all their problems. It would help Alicia and Carey out financially while Diane would have other managing partners to back her up against the others. But these things can also be viewed as hindrances to say someone like David and Damien.

If the firms were to merge then guys like David and Damien would lose their own power base and they don’t want that. Which is why they begin to influence things.

Both firms are working on the same divorce case – The Mercers. And Diane and Alicia tried to make the divorce as easy as possible. Although when David found out what Diane was up to; he then preceded to make the divorce acrimonious. He brought in a secretive tape and on it the wife was sleeping with one of her husband’s former students.

The wife claims she was never told about the tape or the nanny cam in her bedroom and that got the judge to swear it off as inadmissible. However the judge still ended up seeing the sex tape after David used the video as proof his client’s ex was negligent mother. By hook or by crook he convinced his client to go for full custody and he’s using every dirty trick in the book to get it.

Alicia was so disgusted b David’s games that she blamed Diane for his actions.

A lot of people have been pushing Alicia’s buttons recently and that includes Will’s former client (the one that killed him) and his family gearing up to sue the State’s Attorney’s office. Jeffery’s family had approached the State Attorney Castro and they were promised that heads were going to roll. Because it’s their fault that Jeffery freaked out in open court.

Alicia refused to have her firm work for Jeffery’s family, but she is worried about Finn Polmar. She doesn’t want his head to be the one that ends up on the chopping block. So she went office to warn him and he told her that could never happen.

Finn has known Castro for years and was even the best man at the State Attorney’s wedding. Though he soon realized how naive he was to think that any of their past mattered. Castro does want to throw someone under the bus and if he’s not careful Finn could find himself out of a job and getting sued.

Alicia thought she was up to fighting Lockheart/Gardner in trial, but she wasn’t. The case managed to bring back memories of Will and she had to excuse herself from the case in order to just allow herself time to heal.

So she was at home when the divorce case was settled. Though not by David and he didn’t like that. He was prepared to threaten Diane to her face in order to get her to back down, but she already had gained the upper hand by then. Unbeknownst to David, Diane with the help of Kalinda pushed Damien out of the firm thereby making David lose a crucial vote to replace Diane. And it wasn’t an easy fete either.

Kalinda had to sleep with Jenna in order to get unguarded access to the Detective’s files. She used those files she found to blackmail Damien into quitting. Though the methods she used with Jenna cost her their relationship. Jenna apparently didn’t like that particular brand of manipulation.

And there’s also Cary to consider. What is he going to say when he finds out that Kalinda slept with someone else?

Alicia was able to shake off her funk for Finn. She wanted to reassure him that she could still handle his case. Yet once they started talking, he was the one that was comforting her. He noticed her grief and told her that it was going to take time.

But Alicia’s husband didn’t share his view. Peter was upset with Alicia for missing a political event and he thought Alicia should get over Will. And that proved to be his final mistake with her.

Alicia came out and admitted that her affair meant more to her than he knew. Will was an important person in her life and she’s sick of Peter thinking he somehow won her away. So she laid out how their marriage was to go on from here and Peter was left speechless with her terms.

Alicia wants a political marriage. They keep up the front for the cameras and their children, but their lives are now firmly separate.