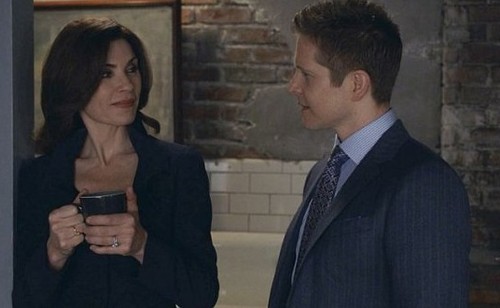 The Good Wife returned tonight to CBS with another great episode.  I cannot wait till next week’s episode, we have a sneak peek video and some insight for you below on what is going on next week below.

On tonight’s episode Alicia looked to her past for inspiration when she was asked to deliver the keynote address at an American Bar Association conference in New York City. Meanwhile, the competition between Florrick-Agos and Lockhart-Gardner ramped up as each firm tried to align with a powerful Manhattan lawyer; and Will turned to an old acquaintance when it becomes clear that Nelson Dubeck’s investigation into voter fraud wasn’t going away.  More happened!  If you missed the episode we have a full and detailed recap, right here for you.

Spoiler alert: If you’re one of those people who doesn’t like spoilers, stop reading now! We have some juicy spoilers for you about the season 3 episode 15 of CBS’s “Dramatics, Your Honor.”

CBS’s Official Synopsis: “Alicia enlists Cary as her lawyer when Nelson Dubeck approaches her to participate in a deposition regarding his investigation into election rigging. Meanwhile, Will continues the difficult defense of Jeffrey Grant as he faces off against a new prosecutor who proves to be a formidable adversary.”

On next week’s episode Alicia enlists Cary as her lawyer when she’s deposed as the investigation into voted fraud intensifies.  Matthew Goode guest stars as Finn Polmar, star prosecutor in the State’s Attorney’s Office. Eric Bogosian returns as Nelson Dubeck, agent in the Office of Public Integrity.

The Good Wife Season 5, Episode 15 “Dramatics, Your Honor” airs on CBS on January 12th, 2013. Check out the preview video from episode 12 below and let us know in the comments below what you think!