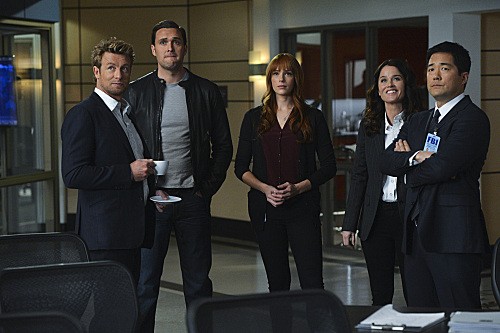 Tonight on CBS THE MENTALIST returns with a brand new show.  A homicide at an oil-fracking site is investigated by Jane and Fischer. Elsewhere, the hunt for suspects who are attacking ex-CBI members leads Rigsby and Van Pelt to Austin. Did you watch last week’s episode of THE MENTALIST? If not we have you covered with a detailed recap of the episode right here.

On last week’s episode Jane’s investigation led him to join a separatist commune after a U.S. attorney was found dead in Mexico, even though there was no record of her crossing the border. Also, Rigsby and Van Pelt convinced JJ LaRoche to help them discover who was stalking former CBI members.

Tonight’s new episode of THE MENTALIST should be great and we’ll be recapping it right here for you. were you disappointed to hear that this is the shows’ final season? Hit up the comments and tell us your thoughts.

RECAP: Wayne and Grace are putting their child to bed, Wayne calls Teresa she tells Wayne about what’s going on with the murder of Laroche. Teresa then hangs up, Grace asks Wayne to give their daughter her drops. Grace walks away, Wayne hears a noise from where she walked off to; he calls for her, but she doesn’t answer. Wayne goes back to figuring out how to put the drops in, Wayne sees a man with a shotgun to his side and jumps out of the way with their baby. Just in time he saves their baby and runs into the pantry, he sits himself against the door so the intruder can’t get in. The intruder tries to kick down the door, but instead he shoots the door at the top and misses them. Grace appears from behind and shoots the intruder, she hits him, but he shoots back and misses. The man then runs from their home, Wayne and Grace are left feeling relieved that their daughter is alright.

Wayne and Grace are now at HQ, they left their baby with Grace’s mother for now. Teresa tells them both that the intruder got in through a basement window that wasn’t closed shut, she reassures them by saying they’ll catch the guy. Cho is briefing a team of people about the case and the suspects they’ll be following. The FBI has gotten Wayne and Grace on the case as consultants. Patrick wants to trust their instincts and take a wild guess, Wayne choose John Hutton because of him being a bank robber and is smart. Grace and Teresa choose their suspects, now they know who to follow. Kim introduces herself to Wayne and Grace; she decides to steal Patrick since he’s not busy. A man named Becker died in a waste water pit. Kim briefs Patrick about the case and about the company he sued while alive. Patrick and Kim arrive at the scene of the crime; they both go up to a few workers to ask about Becker’s death. Jason the worker introduces himself to them; Kim mentions that the victim was murdered by a blow to the head. Jason says it could be murder or he fell and hit his head, a buzzer of some sort goes off and he tells them it’s due to their work. He believes that an anti-corporate group could be behind the murder, he tells them he has his hands full and needs to get to work. Kim wants to talk to Becker’s family, Patrick follows. Wayne tells Cho and Teresa that he’s got something on John Hutton; they decide to look into it more. Kim and Patrick arrive at Becker’s home; they’re introduced to the entire family and friends. Patrick is getting water from the tap for the kettle, to put on tea. She tells him to use bottled water due the tap water having methane in it. It turns out the Becker was going to sue the oil company due to what it does to the water around them, but it didn’t get him anywhere. Becker’s wife lights the water coming from the tap to prove that methane is within it, Kim asks the friends about the oil company and they mention how it’s saved the town. One of the people in the house get into a fight with the family friend Emmet, he tells Kim that he’s part of the entire murder because of greed. Kim takes the man outside to speak to him, he tells Kim about how everyone in town is on the oil company’s payroll. Cho and Wayne arrive to John’s home looking for him; he arrives at the door to speak to them. They ask about what John’s doing, he tells them he’s enjoying a sedentary life with his wife. They ask John to come with them, he seems glad to be getting out of the house. Miller from Houston Bank Robbery Division arrives telling Cho and Wayne they can’t take John with them because he’s working with them.

Miller lets them know that John is working with him and his team, Cho tells them that John is a suspect for intrusion. Turns out that John has a tracker around his ankle, Miller knows where John is at any time. Patrick and Kim go to Samuel who owns the company; he mentions how they probably agree to what they did to his company. Samuel shows Kim and Patrick a video about the protesters having a riot outside of his company, their called the Cooperate. Samuel thinks that the online activist group could be a part of the murder of Mr. Becker. Kim asks if they ever talked to Becker in person, they never did. Patrick believes that a man within the company ordered the assault of Mr. Becker. As they were talking, the Cooperative hack their computers and play a message saying that they believe that the Oil Company is behind the murder. Kim and Patrick are back at HQ. Teresa is asked by Abbot to speak to her in his office, he introduces Teresa to a woman who’s going to conference with Richard through video on a laptop. Mr. Haiboch was out at dinner during the intrusion of Wayne and Grace’s home, Mr. Haiboch orders and apology from Teresa. She apologizes to him for causing any inconvenience. Teresa tells Abbot not to drop this, he believes something feels of about that man and wants him to believe he’s off the hook. Grace tells Wayne about how she couldn’t find anything on her suspect, now the only man they have left is Mr. Haiboch. Wally was talking out loud and Grace notices; he apologizes if he bothered her. Grace tells him it’s fine and asks if he wants help, she ends up helping Wally with finding out who released the videos onto the Oil Company’s computers. Patrick and Kim go to the location of where the videos were uploaded at, they both go and ask a man for questioning. Patrick lies about this young kid being the one behind it, when it turns out that it was the overweight man behind them; Patrick sees him get up and tells Kim he lied. Kim runs over and tackles the man to the ground.

Abbot begins interrogating the man who put up the videos, it turns out the man was arrested once because he hacked into NASA; Abbot believes that the man is in charge due to him feeling that the Oil Company is behind the murder. Abbot tells him that hacking can have him in prison for ten years, that he can be tough behind a computer, but in a cells it’s a whole new game. Turns out that the man was working with Dan to find a list, things didn’t go to plan and Dan Becker ended up dying. Patrick asks Jason why he didn’t mention anything about Dan Becker sneaking into his office, Patrick goes back to the Oil Company with Kim to find the safe. Patrick finds the safe and asks if something else was taken other than the black book, the man says no, but Patrick knows there’s more to it. Patrick figures out that the desk was moved meaning someone was searching for the safe, Jason says there was no break in. Patrick leaves with Kim, their going back to Dan’s friends. Patrick asks everyone to come in and get seated, since the case has taking an interesting development. He plays the song that played during the video in the Oil Company, he asks if there’s any significant meaning to the song. They all shake their head. Wayne tells Cho that Hutton has been at his house for fourteen hours and that it’s strange, he called his house and got no answer. They go over to John’s home and they find out that he’s not at home, that he was able to replicate the same frequency of the ankle tracker on his I-Pod making it seem like he was at home the whole time.

It turns out the Hutton’s wife has no idea where her husband is, he was last seen traveling in a blue jeep. Patrick asks Wiley how much someone can hurt another person on the internet, he tells him pretty bad depending on the information they have. Abbot is following a man at the gas station, he puts in the CD that plays the disoriented sounding London Bridges Falling down song. The man Price thinks he’s being contacted by Cooperative, he tells them that he didn’t murder Dan. He keeps on denying it, Patrick is behind the voice tricking him that he’s Cooperative. He’s telling him about everything he’s done the past week, showing him that they know everything and are coming after him. Price gets into his car and drives off instantly, Abbot sees this. Price gets back to his home and is panicking; he’s caught by Kim and Abbot. They’re both interrogating Price about Dan, about him helping Dan break into Jason’s office. Price admits to helping Dan break into the office, getting a $100,000 and the black book. Dan took the black book and Dan took the $100,000. What went wrong is that Dan found out that Price took the money. Dan freaked out and tells him their not taking the money; he said that it wasn’t right. Dan and Price got into a fight; Price ended up taking a rock from the ground and smashing Dan’s head with it and killed him upon impact. Price tried to blame the Oil Company of Dan’s death. Kim talks about Jason’s black book and how detailed it was. Samuel ends up firing Jason on the spot because of him being a liar. Cho and Wayne are driving around; they find a blue jeep at someone’s home. Cho and Wayne end up finding John sleeping with a woman, he’s caught banging his mistress behind his wife’s back. He only hacked his ankle tracker to cheat. They’ve got nothing on the intrusion case. Grace is at a motel and hears her phone ringing, Wayne tells her that Hutton isn’t behind the intrusion and that he’s out with the guys. She hangs up and tries to go back to sleep, behind her is a hooded man in all black he slowly walks up to her bed and it goes to black.