BY Stormy Elizabeth on November 9, 2014 | Comments: one comment
Related : Recap, Television, The Newsroom 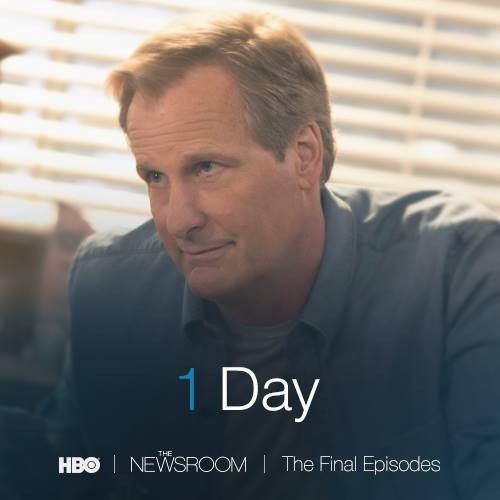 The Newsroom returns on HBO tonight with an all new Sunday November 9, season 3 episode 1 premiere episode called “Boston”. Tonight, Season 3 begins in April 2013 in the aftermath of the Genoa disaster, so the “News Night” team treat a breaking story cautiously, a strategy that could benefit them in the long run. Meanwhile, an anonymous source contacts Neal [Dev Patel] about stolen government documents that may be related to riots overseas; Sloan tries to solve a puzzle; and Maggie subs for Elliot following the Boston Marathon bombings.

Keep in mind, this is the third and final season of The Newsroom.  The creator Alan Sorkin recently told THR that he probably won’t be doing television again.  He said, “I know the whole ‘Never say never’ stuff.  But I’m pretty certain I’m about to write my last three episodes of television.”

On tonight’s episode as per the HBO synopsis, “In the wake of the Genoa debacle, Will (Jeff Daniels), Mac (Emily Mortimer) and the “News Night” team decide to err on the side of caution in reporting a major breaking story, which may enhance credibility, if not ratings. Neal (Dev Patel) faces a slippery slope when he’s contacted by an anonymous source in possession of stolen government documents revealing how false press stories planted in newspapers spawned fatal riots in Kundu. Sloan (Olivia Munn) looks to solve a takeover puzzle; Maggie (Alison Pill) is forced to pinch-hit for Elliot (David Harbour) in the aftermath of the Boston Marathon bombings.”

You aren’t going to want to miss any of the unfolding action tonight. We’ll be recapping the season 3 premiere live right here for you at 9pm. In the meantime, while you wait for the recap, check out a sneak peek of tonight’s episode below!

Mackenzie and Will talk about the wedding. They talk about bridesmaids and groomsmen. Will isn’t having any of it. He thinks it’s ridiculous he needs to have so many groomsmen. Mackenzie notices an explosion on the monitor and it turns out to be the Boston Marathon explosion. Everyone is hustling around to get the story up, but Fox has beat them to it.

They send Maggie to Boston — even though Will thinks she’s not cut out for this job anymore. Elliott tags along as well.

Mackenzie heads to the production room and sends out the breaking news: two explosive devices were detonated at the end of the Boston Marathon.

Will takes his seat to begin his breaking news coverage.

Elliott and Maggie arrive in Boston. They want to go straight to the scene.

Neal receives an encrypted note. Once he’s encrypted it, the message tells him to setup a higher level of encryption.

Sloan has breakfast with her contact from Goldman Sachs. When she returns to the office, Reese is laying around in her office. He brings with him an embargoed report featuring some projected numbers that have been exaggerated slightly.

In a meeting, Neal reveals to everyone that his confidential source is trying to get him top secret government documents. Everyone kind of laughs at him for believing this mysterious source so blindly; however, after the meeting, Will gives Neal his credit card and tells him to go get the materials he needs to complete this deal.

Will and Mackenzie are eating Chinese food and get a call from Maggie in Boston. She’s decided to chase a slightly different story.

The next day, Neal goes to the restaurant where his source has dropped a flashdrive of top secret info. He pulls the flashdrive out from a toilet and immediately returns to the newsroom where he examines the drive’s contents. Countless documents pop up on the computer screen.

In Boston, Elliott accidentally eats some chicken salad with walnuts in it. He’s allergic to walnuts and his tongue swells. Maggie has to do give the story on air. She gives the story successfully, and everyone in the Newsroom is completely impressed with her.

Will and Charlie meet up with Reese. Reese reveals that they’ve dropped to number 4. Will thinks that maybe it might be time for him to quit. Soon, Neal tells everyone about the documents he’s acquired. As he’s telling everyone about how he acquired the documents, Will reveals to him that he basically committed a federal crime and aided in espionage.

Meanwhile, Sloan figures out that Reese and his family’s company is basically in the midst of a hostile takeover and that he must call an emergency board meeting.