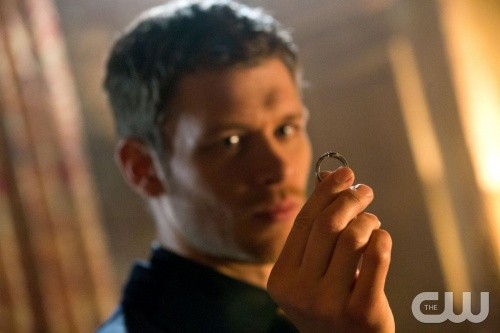 We have your weekly review of last night THE ORIGINALS episode 15 called, “Moon Over Bourbon Street.”  The show opens with Klaus painting a Cathedral. Hayley gently rubs her tummy. Kieran is trying to delay the curse by drinking some kind of potion or another.. Klaus and Genevieve are getting it on to which I say boo and ewwww. Meanwhile all the other supernaturals are flipping out, it’s absolute chaos. Vampires are making cops snacks and a width is tormenting some other people. It’s full moon time and the wolves are all about not being cursed they take the antidote and wait. The moon hides behind the clouds and much to their and Haley’s pleasure they all stay human.

Elijah comes in and tells Klaus that he has a monster in his bed and then promptly disses and dismisses Genevieve. Elijah feels,the need to remind a Klaus that she is the one who tortured Rebekah,Mto Klaus it’s pretty much apples and oranges at this point. Apparently it’s been a month since Rebekah put her get out of jail free card To good use and Klaus is in somewhat of a funk. Elijah suggest that he does something, it’s more like a demand really. After all if Klaus wants to be the King of New Orleans he needs to quit sulking and act like it, no more neglecting the title for him. Elijah reminds his mopey brother that they need to make New Orleans a home for Klaus’s daughter. Klaus tells Elijah that it is broken, actually it is he who is broken, Klaus goes back to painting. Elijah tires of Klaus being a baby tells,him if he won’t talk action then he will and Elijah leaves.

Elijah has a meeting with all the supernatural big wigs and explains that Marcel and his rules are null and void, he rips them up for emphasis. Elijah informs them he is now the one in charge. Elijah tells them when ever they have a disagreement with one another they are to come directly to him, do not pass go, do not collect two hundred dollars.

Davina is with the other witches trying to bring flowers back to life. Davina is so scared that she can’t do it. The others mock her, when she gets her mojo back they are so going to get it, how I hope she starts with that snot nosed brat Monique.

Out in the bayou the wolves are fighting for the top spot. Haley questions why Jackson isn’t taking part. Jackson tells her he is a alpha and thus doesn’t have to do,anything excepts it back and enjoy the show . At dinner Ollie comes over and tells Haley that half her life was either spent with vampires or humans. Haley calls Ollie a runt and he tells her about Elijah’s pow wow with the top dogs of the supernatural world and that the wolves didn’t have anyone there to speak on their behalf. Haley is not pleased with Elijah.

Meanwhile over at the evil doers summit it’s a real bitch fest. Hayley comes in and asks for their share. Diego decides to,get up,in her face, she tells,him they deserve a chair to and to step off little man. Haley then tries to intimidate them by saying they will regret it. Elijah and Haley just stare at each other. If he would just grab her and kiss her this could all be over with already.

Elijah takes Haley to the side and explains what a trial it was to get everyone to show up and since the wolves don’t leave in the quarter they don’t get a say. Haley ask if that’s what he really wants her to tell,the wolves. Elijah actually would prefer that she stay the hell out of it. Elijah then ask her to,come back home but since he won’t let the wolves speak for themselves she refuses, she tells him the wolves deserve to be heard and that it is the right thing to do.

Klaus is still painting, Genevieve tells him Hayley showed up at the pow wow. Genevieve ask if he thinks a peace accord will really work, it might if Klaus sticks to painting. Cammie breezing in and voices her displeasure in Klaus keeping the company of a half naked witch. Genevieve leaves and Cammie asks him how in the world he can be with the person who tortured him with a dagger. Cammie wants his help to stop the curse that is on Kieran. Klaus tells Cammie that is a no can do type situation, once the curse takes root there is no going back. Klaus tells her she needs to accept it.

Davina seeks,out Josh. Josh ask,Davina what’s wrong. Davina tells,him about Monique bullying her and how she was scared by her ancestors while she was dead. She tells Josh she never should have trusted Marcel when he wanted to send her back. Marcel just happens to hear the whole conversation from a nearby roof. Thierry shows up and Marcel tells him that he is going to take back the city. Thierry tells Marcel it will take more than words to get back the city.

Cammie does to see Kieran. When he tries to attack her she takes a lamp and hits him over the head with it. Cammie takes off.

Elijah notifies Klaus that he is sick of his indifference. Klaus tells,him he needs to make peace with the wolves of he wants to get things done. Klaus then reminds him of how they worked the governor along time ago by piling him with wine and women until he would say yes to anything. Elijah wants to know if Klaus thinks they should throw a party. Klaus is all hell to the yeah.

It’s party time and any kind of supernatural what’s it you can think up is at it. Klaus is impressed. Elijah is just hoping they don’t all kill each other. Haley arrives with Jackson. Elijah tells Francesca that she can be in charge of the human faction until Kieran is back to his old self. Francesca thinks they should down some time together. To bad for her Elijah spots Haley and goes all google eyed.

Diego looks like he wants to harm some wolves. Elijah tells him to mind his manners that they have to have peace with them. Elijah goes and shakes Jackson’s hand and tells him to have a enjoyable evening.

Klaus follows Jackson and tells him all about a ring his mother gave him. It quite possibly could be to wolves what a daylight ring is to a vampire. Jackson is very very interested.

Ollie sees Davina and ask her to dance. Before they can Monique shows up and pulls a bitch move which causes Davina to walk away. Elijah dances with Haley. Jackson want to cut in, Elijah tells him no but Haley goes with Jackson anyway. Elijah overhears part of their conversation and gets a little upset.

Cammie is at home fixing to pour herself a drink when Marcel shows up out of nowhere. Marcel is there to tell her he has had a boundary spell done so that she will be safe from Kieran. Cammie tells Marcel she is out of bourbon. Good thing they are in New Orleans they have a whole street named for it.

Ollie and Diego have a little skirmish that results in Elijah grabbing Ollie and Jackson grabbing Diego. Haley reminds Elijah that Ollie and Diego have both done some bad things and if they can’t learn to get along they all might as well kill each other right then and there. Elijah lets Ollie go and then Jackson releases Diego.

Josh is with Davina and they have a sweet moment talking about boyfriends. Josh tells Davina if her family doesn’t like who she is then screw them. Josh tells Davina she has him, Cammie and even Marcel if she wants. Davina reminds him Marcel used her, Josh reminds her that Marcel also saved her from being killed. Josh tells her even if she doesn’t trust Marcel, he still loves her. Josh tells Davina he loves her to. Josh hands her the dead rose,he tells her she can’t change who she is. Davina does the spell and the rose comes back to life. Davina gives it back to Josh.

Cammie and Marcel come back to her apartment. They both are drunk and they end up having sex. Genevieve watches it all through a dream catcher. Cammie tells Marcel afterwards it can’t happen again. Cammie doesn’t want to upset Klaus. On his way out Marcel destroys the dream catcher, it’s a little late for that.

Klaus is staring at one of his paintings, he adds a moon.

Haley is siting at the table with Elijah and all the rest. They all agree to the new treaty and then cut their palms.

Jackson thrilled with Haley getting them a voice kisses her, just on the cheek though.

Davina is staring at the rose. Monique walks in and sees that the room is full of them.
Jackson tells Ollie about his deal with Klaus and how if they take it will make them more powerful than they are in human form that their bite will kill vampires and they will be able to dominate humans. Ollie likes the sound of that and smiles.

Elijah gets Klaus to sign the treaty even though he feels that no one will stick to it. Elijah tells him not to wager against him that Klaus will lose, not with the wolves in his back pocket he won’t. Klaus tells says they will see and looks thoughtfully at the moon in his painting.

If you want a sneak peek video & synopsis of the next  episode which will air April 15th, 2014, “The Big Uneasy” check out the preview of episode 18 below!