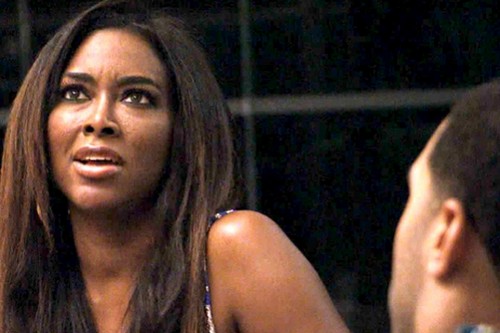 There is so much craziness happening right now on The Real Housewive’s of Atlanta that it’s almost tough to keep track of who is fighting and all of the reasons why! The show is back tonight with an episode called “Flirting With Disaster” and while soaking in the beauty of Mexico, Kenya downloads Lawrence on her thoughts on Porsha and Kordell’s complicated relationship and also reveals lingering issues she has with Apollo. Later that evening, Kenya crashes the guys’ night out and confronts Apollo one-on-one regarding their troubled history, but the conversation is cut short when an unexpected guest shows up. Did you catch last week’s episode? If not then you’re in luck because we have a detailed recap right here for you!

On last week’s episode Kenya thought that the ladies and their partners could do with some rest and relaxation and organized a trip to Mexico. However, not everyone is excited about the trip, as both NeNe and Phaedra voiced their displeasure. Kenya checked in on her new good friend Marlo and learned the jaw dropping truth behind the Bailey Bowl drama with NeNe. Meanwhile, Porsha learned that Peter has his own tea to spill, leaving Cynthia caught in the middle and Porsha feeling tormented by her marital past.

On tonight’s episode Soaking in the beauty of Mexico, Kenya downloads Lawrence on her thoughts on Porsha and Kordell’s complicated relationship and also reveals lingering issues she has with Apollo. Later that evening, Kenya crashes the guys’ night out and confronts Apollo one-on-one regarding their troubled history, but the conversation is cut short when an unexpected guest shows up.

Kenya says she’s over the drama but clearly she isn’t. The reality star is still talk about Kordell and Porsha despite the grilling she and Peter gave Porsha last night. She and Miss Lawrence were going over the conversation from that night and they both felt Porsha was calling her soon to be ex-husband gay. And honestly that is how Porsha made it sound. She was the one that first used the word arrangement and she brought up how Kordell had a reputation before she came along. So of course the very opinionated Kenya was going to have something to say. She told Miss Lawrence that the whole marriage was arranged, but it must have failed (according to Kenya) when Porsha wasn’t the perfect trophy wife that Kordell thought he was getting.

And then continuing in her role as a trouble starter – Kenya decided to re-open the Apollo discussion. She feels like all that trash talking he started last season came out of nowhere and figures they can maybe talk it out while on vacation. (Kenya’s companion sadly did not talking her out of this)

Later on, Kenya planned excursion to the caves goes ahead. They were split in two different groups heading there and luckily Kenya and Apollo were separated. But a slight hiccup came up when it was time to swim in the caves. Kenya was the first in the water and everyone else was busy sitting on the sidelines hedging their bets.

And none so more than Apollo. He wanted to go into the water like the rest of the girls and yet he was smart enough to realize that he couldn’t be in a grotto with only Kenya. Not only would Phaedra kill him, but with the way she warned him earlier she probably would have killed him slowly. So in a rare moment of wisdom he waited until his wife was ready to go into the water and then he joined her.

Crisis averted or so it was thought. The cameras caught everyone leaving the water and through some shadiness with the producers – the cameras manage to pick up Apollo checking Kenya out. His wife didn’t notice on the scene, but odds are she will have seen it by now.

Back to their vacation. Once Kenya chose a few of the group and ditched the rest – those that were left behind started talking. Porsha came right out and asked Phaedra about her feelings. She knows it can’t have been easy watching Kenya do her oversexed shtick in front of everyone again. And Kenya herself would have been surprised to hear that Phaedra has stopped letting the other woman get to her.

While Porsha and Phaedra were talking at the hotel the rest of the ladies – Kenya, Cynthia, Kandi, Nene, and Miss Lawrence were at a special ceremony. Kenya has been trying for a baby lately and so she brought along the girls for a special fertility ritual.

In probably one of her most honest moments, Kenya opened up to the women. She told how hard it was to want a baby to only then realize she might have left it too late. And the other woman can sympathize with her. Kandi also wants children but with both of their ages and the way their love lives are going – pregnancy is looking farther and farther away.

In Kandi’s situation, she has to find a way to deal with her mother. Now Todd doesn’t want Kandi to cut off her mom, but something has got to give if they’re to be married soon. That’s why he suggested Kandi put her foot down and demand that Mama Joyce got to counseling.

It’s like Peter said. Certain things need to be resolved or they’re only going to fester. Unfortunately though for Peter, his words ended up doing more harm than good. Kenya wanted to settle old issues as well.

It was just her and the guys (just the way she likes it) smoking cigars when Kenya asked to speak to Apollo alone. Peter tried to talk her out of it and when that didn’t work Todd then tried to chaperone the pair. Kenya on the other hand soon got him dismissed from this job. She said she wasn’t going to do anything that needed chaperoning.

Once alone Kenya wanted Apollo to admit that she never crossed the line and all he told her back was that he could have slept with her if he wanted to. Why does he think this? Apollo is of this opinion because of the way Kenya acted and how she put herself out there. So it doesn’t matter if she never made a formal offer. This her actions speak louder than her words.

She’s still trying to tell him to stop spreading that story, but they are lighting flirting during a conversation on inappropriate behavior. So there kind of goes your case, Kenya!

These two were so caught up in what each other had to say that neither noticed when Phaedra walked into the room. When Apollo does see what he’s done is wrong then he’ll be kicking himself for dismissing Todd. Because it seems they did need a chaperone after all.