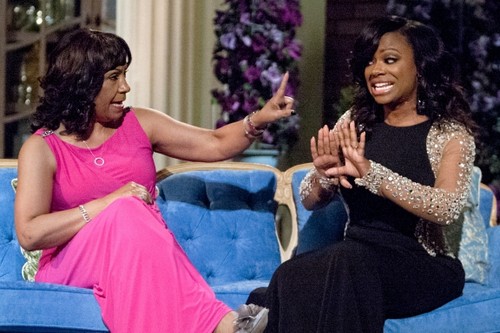 There is so much craziness happening right now on The Real Housewives of Atlanta that it’s almost tough to keep track of who is fighting and all of the reasons why! The show is back tonight with an episode called, “Reunion Part 2.” On tonight’s episode Part 2 of 3, Momma Joyce joins the women to reflect on the drama from this season.

On last week’s episode the housewives saw each other for the first time in a while and talked about what’s latest in their lives. Their discussion then shifted to the more controversial topics, “Kenya Moore drama” and Kenya Moore and Porsha Williams drama. This was followed by Porsha Williams’s discussion with host Andy Cohen which ends up with a “surprising turn of events.”  Did you watch last week’s episode?  If you missed it we have a full and detailed recap, right here for you.

On tonight’s episode of real housewives the ladies discuss the Porsha vs. Kenya aftermath. Momma Joyce joins the women to reflect on the drama from this season and where she stands with her opinion of Kandi and Todd’s relationship. Cynthia and NeNe also hash out their issues from this season, which leads to an unexpected outcome.

In the aftermath of the fight, Kenya quickly started to blame the whole incident on Porsha. She tried to play off her use of a bull-horn as a simple a war of words that got out of hand. But Nene, Phaedra, and Kandi feel like Kenya’s props is what escalated the argument into a physical fight.

According to them, Porsha was under attack. She had objects thrust in her face and was being accused for all of sort of things. So it wasn’t surprising that Porsha hit Kenya. Anyone else would have done the same.

Cynthia doesn’t see the fight the same way her one time BFF does. She feels like that Porsha could have handled it differently. And the main reason why she’s not supporting the poor Porsha act is because everyone on this show knows what the Reunion entails. The Reunion show is all about harsh questions and dealing with people so the fact Porsha couldn’t hack it is mostly her own fault.

Nene disagrees. She’s firmly anti-Kenya and so Kenya attempts to pay her back for it. Kenya brought up Nene’s old fight with Phaedra. She claims that last season Nene had admitted to wanting to get Phaedra simply because she didn’t like her.

While Nene says that she’s moved past any old grudges and that she and Phaedra are now cool with each other. Even though that doesn’t really make sense seeing as Nene was the one to bring up the old rumor about Phaedra during this last season.

The rumor about Phaedra being a “head doctor” was uncalled for and Nene did manage to apologize for her comments afterwards, but some are still shocked at how close these two women have become since then. Kandi for one didn’t seeing it coming and neither did anyone else.

However Andy moves the conversation along by bringing up Mama Joyce. Mama Joyce has joined the women on the couch to answer some tough questions about her actions this past season.

To begin with, she denies ever trying to set up a sting on Todd. She still doesn’t like him, but she never went as far as to setting him up. Nor has she gotten used to the upcoming wedding.

Out of ignorance or possible out of spite – Mama Joyce keeps forgetting when Kandi is supposed to marry Todd.

And that’s just her. Mama Joyce has always been quite a character. She’s outspoken and that’s why her relationship with Kandi’s future in-laws has grown into another and even funnier story. As the story goes – someone called her a bitch and Mama Joyce almost jumped across the table. The only thing that stopped her doing that was the fact Kandi was restraining her at the time.

Mama Joyce has been accused of hating Kandi’s boyfriend once the relationship gets serious. Some feel like she does this because she feels threatened. What if Kandi marries someone and that person tries to cut off Mama Joyce, but the woman in questions says her daughter doesn’t pay for everything.

She has her own house and she has her savings. Sure, her daughter may help out every once in a while, but Mama Joyce denies having her daughter basically support her.

Kandi does take care of her mom though. She loves the other woman enough to step in when Mama Joyce’s gambling and shopping habits get out of hand. And let’s not forget that Mama Joyce had also taken out a credit card in Kandi’s name without Kandi knowing about it. So Mama Joyce does have something to lose and it’s more than just her daughter’s love.

When the show came back from a break; Andy finally addressed the friction between Nene and Cynthia.

This last season has seen them go from one argument to another and now the two women aren’t even acknowledging each other during the reunion. Except for the odd comment – it’s as if they’re strangers still getting the feel of the other. And Cynthia blames that on the way her friendship turned out.

She’s always tried to be there for Nene and frankly she’s gotten tired of their friendship coming off as one-sided. Cynthia feels like Nene doesn’t respect her and instead of talking through it – Nene is choosing to save what she has to say until they’re away from cameras. Nene doesn’t feel like she owes the show or Andy an insight into her friendships because they are things she doesn’t want to be seen on camera.

That sounds like an excuse to me, but what about you? Should Nene have fought for her friendship then and there or was she right to deny the cameras even with Cynthia crying in front of everyone?