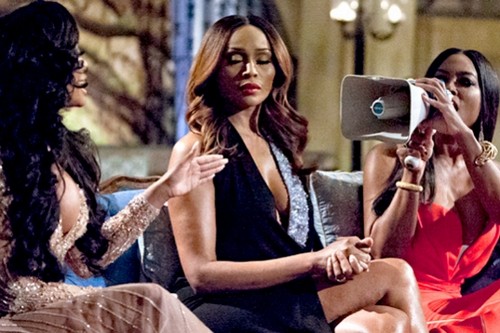 There is so much craziness happening right now on The Real Housewives of Atlanta that it’s almost tough to keep track of who is fighting and all of the reasons why! The show is back tonight with an episode called, “Reunion Part 1.” On tonight’s episode Part 1 of 3, the Atlanta ladies reunite to discuss Season 6’s antics. Included: Dramas center on Porsha and Kenya; and Porsha has a one-on-one interview with host Andy Cohen.

On last week’s episode it was just days before the debut of Kandi’s musical, and ticket sales were far from booming. NeNe returned from her travels experiencing unusual pains, causing her to seek medical attention. As Phaedra neared the end of her mortuary science journey, Apollo revealed his concern for their marriage.  Did you watch last week’s episode?  We did and we have a full and detailed recap, right here for you.

On tonight’s episode of real housewives they will see each other for the first time in a while and will talk about what’s latest in their lives. Their discussion will then shift to the more controversial topics, “Kenya Moore drama” and Kenya Moore and Porsha Williams drama. This will be followed by Porsha Williams’s discussion with host Andy Cohen which ends up with a “surprising turn of events.”

Ten minutes into the reunion and trouble is already brewing. Kenya has once again brought a prop to the sit-in. This year it’s a scepter and Nene had to roll her eyes when Andy brought attention to it.

The second troublesome topic was of course Phaedra’s home life. She says all is currently well at the moment and that she had never been dragged into Apollo’s legal issues. Nor does she plan to get involved. Hmm… and here we thought she was lawyer so again hmm.

However things were quickly brightened up by Andy when played footage of the girls twerking. All the girls have twerked at one point throughout the season, but only Cynthia has been called out for doing it wrong. One viewer said Cynthia was an embarrassment as a black woman. Also that she was at risk of losing Peter if she didn’ get her act together.

It was a low blow and Cynthia was able to shake it off. Yet for her supposed best friend, Nene didn’t really stick up for her. She basically left Cynthia to fend for herself which is odd because out of the group – these two have always tried to be there for each other.

Then the drama came up again. As in Kenya was once again the topic. This time it was about her butt. Kenya denies it’s fake and that she’s not offended by people thinking otherwise. Even if people…say like Phaedra have called it a diaper butt.

Kenya has never had a problem with getting a guy and so other people’s opinions don’t bother her.

But speaking of shade, Nene has been very vocal this season about a lot of things. She kind of insulted Kandi’s play by saying she wasn’t going to go from Ryan Murphy to Kandi’s production. Even though the play itself has sold out in most arenas and is now out on DVD due to demand. So it’s quite popular.

Though Kandi said she wasn’t offended. At least not by that. If she was going to get offended then it would be when Nene made the comment that Kandi shouldn’t have stopped for a sandwich.

Kandi was late to one of Nene’s events and still she stopped to grab something to eat. Nene was upset and Kenya was upset, but Nene made a dig at Kandi’s weight. Kandi was upset by it and Nene thought she shouldn’t be. It was an off the cuff remark.

According to Nene the only person to have made fun of Kandi’s play was Kenya. And a viewer went on to accuse Kenya of making fun of Kandi’s weight. She didn’t. What she did was make a joke that Kandi wasn’t bothered by.

Kenya has had it tough with losing her dog. Like Cynthia said Velvet was her baby and to lose her in the way she did must have hurt. And despite all their problems – everyone except for Nene reached out to express their condolences. Well, Nene had actually thought about buying another dog for Kenya when she was told that Kenya would need more time. So she did have Kenya in her thoughts.

The problems between Kenya and Nene go on with the boyfriend dilemma. No one has met Kenya’s African prince and so they believe he’s invisible.

Only Kenya swears Nene had met her boyfriend and as far as Nene is concerned she doesn’t know who she met that day. Some guy off the street tried to talk to her and she dismissed him because frankly she didn’t know who he was.

Nene is the only person that could say he’s real and seeing as she denies meeting him – it left Kenya defending her relationship to everyone else. But she says it’s not a repeat of last year.

Walter was her boyfriend and for all the people that laughed at her then – Kenya is glad they’re facing Karma now.

Then again Phaedra doesn’t feel like she’s had to deal with Karma. In case anyone forgot, Phaedra was a good friend to Kenya once upon a time. And so any hardship that comes Kenya’s way is pretty much all her own doing. That’s why Phaedra takes small pleasures from it.

As for Porsha, she tried to defend herself against Kenya’s attack, but the blow horn (Kenya’s) was drowning her out. So Kenya got the chance to keep talking and what she was saying was downright malicious. She accused Porsha of cheating on Kordell and thatproved to be the other woman’s breaking point.

Porsha stood up and then Kenya stood up. Yet it was Porsha that made the first move. She attacked Kenya by dragged her by her hair across the stage.

Kenya eventually was freed and she stormed off, but Porsha was left at the scene throwing a pity party. She was so ashamed of what she had done that it took most of the women to get her to calm down. Once she was back in control of herself – Andy advised her to go home. It was impossible to have both her and Kenya back onstage. And so Andy chose Kenya.

This is only Part I and still there was a fight thirty minutes in and someone managed to get sent home. What’s next week going to be like?