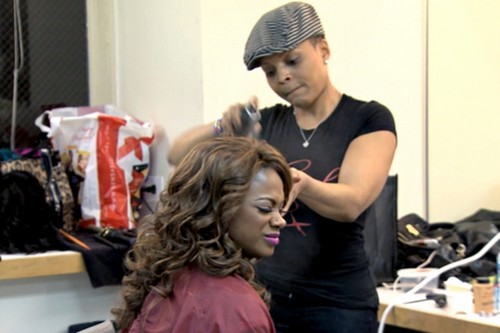 There is so much craziness happening right now on The Real Housewives of Atlanta that it’s almost tough to keep track of who is fighting and all of the reasons why! The show is back tonight with an episode called, “The Final Curtain Call.”  On tonight’s episode Kandi debuts her new musical.

On last week’s episode with one week left until opening night of Kandi’s musical, “A Mother’s Love,” Porsha headed to the studio to record her own single. Momma Joyce also stopped by rehearsals and ended up having an open conversation with Todd on the future of their relationship. A shocking loss hit Kenya causing her to put aside all of the drama and realize what was important in life.

On tonight’s episode it’s just days before the debut of Kandi’s musical, and ticket sales are far from booming. NeNe returns from her travels experiencing unusual pains, causing her to seek medical attention. As Phaedra nears the end of her mortuary science journey, Apollo reveals his concern for their marriage.

It’s days away from opening night and Kandi is nervous about her play. She wants it to be perfect. Especially as her mother will be seeing it and she wants Mama Joyce to recognize how well of a team she makes with Todd.

Lately Mam Joyce has been on good behavior, but Todd has yet to feel a connection with her. So they’re hoping that the play will help create a comfortable relationship with his future mother-in-law. One that will preferable be less hostile.

Kandi is pretty clear on what the pre-nup stands for so it couldn’t possibly be any misunderstandings. The contract will state that everything she made on her own should remain hers. But she is willing to share on their joint projects. So again what’s the hold up?

Meanwhile Kenya had a funeral for her dog, Velvet. She loved that dog more than anything and you could even say that was her baby. And so Velvet’s funeral was hard for Kenya. Although she was lucky to have family and friends there for her – offering support.

Cynthia was one of the people that were there for her and later on she decided to be there for someone else as well.

Usually Cynthia isn’t the romantic one in her marriage. She pretty much leaves that field up to Peter, but she wanted to show her husband that she could do a night in just as well as he could. And their relationship has only just gotten back on track. Though Cynthia struggled in setting the mood and that’s why her sister Mal had to come and help.

Mal assisted with setting up the candles and then helped get Cynthia into sexy pose – all without laughing which mind you must have been hard. Then when she left it was all down to Cynthia (the same woman that knows she suck at dirty talk).

Peter came in and all he could do was laugh at first, but they eventually got into the spirit of the night.

Porsha on the other hand is far from feeling the same romantic optimism. She signed off on her divorce papers and its official now. What she shared with Kordell is over and the only thing she has left is the ring.

Porsha didn’t take anything from Kordell besides it and she has yet to take it off. When her mother and sister came by – they happily convinced her to remove it.

It’s opening night and most of the girls will be out to support Kandi. That is except Nene who honestly hadn’t been feeling well prior to the big night. Kandi was disappointed to hear about that but her main concern is her mother. Mama Joyce is possibly the most important person in the audience for her. And that’s saying a lot with the A-list stars already out there waiting for a great show.

Still Mama Joyce did arrive in a great mood and if she loves her daughter then she’ll keep the mood going even after she watches a play based off her own life.

Porsha is excited about the play. She finally made peace with the stage manager and her family came out for her too.

Did the play live up to expectations? Well, the audience certainly enjoyed it and Mama Joyce also said she loved it (albeit reluctantly).Although the footage of her in the audience tell a different story. The cameras caught Mam Joyce several times making a ticked off space.

So even though she told her daughter that her life is her own – that could be because Mama Joyce doesn’t want to be the topic of another play. While Kandi’s father, Titus, was able to offer real support towards Kandi’s relationship with Todd. He told her that he trusts her decision.

Kandi married Todd and so now Mama Joyce just has to deal with it. And for the most part everyone else epilogue showed only happy news but Phaedra it seems won’t be defending her husband in federal court. Instead she’s focusing on her businesses.

Hmm…I guess that will be explained when Apollo shows up for the reunion. The promos reveal he’ll even answer questions about his impending trial and all I have to say is that we knew he was dumb and yet never imagined Apollo would be stupid enough to willing face the public.