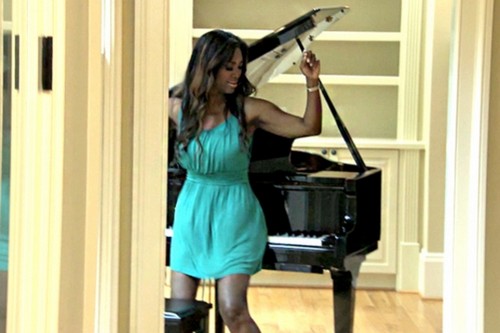 Tonight on Bravo THE REAL HOUSEWIVES OF ATLANTA continues and tonight’s episode is called, “Girl Code Breakers.” On tonight’s Kenya decides to pack up and move out of her rental home.  Did you watch lastweek’s season 6 episode 2? We did and if you want to get caught up before tonight’s episode, you can read our full and detailed recap, right here.

On last week’s episode Kenya went to court to fight her eviction, Porsha moved in with her mom, and Cynthia revealed that for years she’s been hiding a debilitating condition. NeNe was over Kenya’s antics, and took  her to task for breaking the girl code by texting Apollo. Kandi tried to get her mom to accept Todd, but Joyce had deep suspicion of him.

Kandi is surprised to find her work confidant Don Juan sharing concerns about her relationship with Todd. NeNe struggles to adjust to her new role as housewife after The New Normal is cancelled. Cynthia faces going into surgery and Phaedra preps for a family photo shoot. Porsha starts unpacking at her mother’s, but is shocked by what she uncovers. Kenya decides to pack up and move out of her rental home.

Tonight’s episode is going to be another drama packed one, which you won’t want to miss. So be sure to tune in for our live coverage of Bravos’ The Real Housewives of Atlanta Season 6 episode 3 – tonight at 8PM EST! While you wait for our recap, hit the comments and let us know how excited you are about the new episode of RHOA tonight.

Kandi said whenever she experience drama in her daily life then she’s at her best business wise. So it isn’t shocking how well her studio has been coming along. But with every step forward is a step back. Kandi was explaining to her assistant the argument she had with her mother. How Todd could be influencing her in the negative way and while her assistant understood her concerns he knows exactly what her mother is going through. He said her mom probably doesn’t know where she fits in. He feels the same.

He wants Kandi to have her happily ever after. Yet what will happen to him. He feels like he may get cut out of her slowly but surely with Todd around. Kandi can’t understand why her people are feeling this way. When has she ever pushed them away because of a relationship? She hasn’t before and there is no reason why she would start now.

Nene is readjusting to life back in Atlanta. She had gotten used to working on daily basis only on set. That’s why she eyes Gregg, when she tries to give her cleaning gloves, like he’s from a different planet. She used to do these things but not anymore. Although she’s going to have to find something to keep her busy. Glee’s production was pushed back after Cory Monteith’s death. Which means she’ll be staying in ATL a little while longer.

Cynthia has her fibroids removed. It involves some surgery and she was lucky to have her husband at her bed side the entire time.

Porsha is still angry. A fact that becomes evident when she refers to her husband as a queen. This particular time, she was enraged because Kordell had packed up and sent her all of her belongings. Apparently he didn’t take care with of her dresses. It was messed up and was thrown on the floor of the box. It was one her wedding dresses.

Phaedra is doing a family photo-shoot. She wanted a new one with the new baby but Apollo is upset. He swears he didn’t have any forewarning about the photo session. The two have been disagreeing a lot recently. Apollo is feeling like Phaedra never listens to him. She just does what she wants to do.

Kandi spoke to her daughter about Todd. She was worried her mother was going to turn the little girl against the relationship. Riley isn’t all that excited about the wedding details but she does support her mom. She actually advises her to let her grandmother be the way she is. Once Kandi is married then no one can really say anything against Todd.

Peter was only ever going to be supportive for so long. Cynthia barely makes it back home before he starts calling her. Why? Well, she had only slept with her husband every two months. Never mind she was in constant pain; she was mean to him. Now that Cynthia will be getting better she says she’ll rectify that area of their relationship.

Kandi stops by Porsha’s. They have been hanging out a lot lately and Kandi has it in the back of her mind that maybe Porsha is outing up a happy façade. In the end, she did have a point. Porsha felt she had devoted a lot to her marriage and it’s hard to see everything in boxes. After a couple of tears though the ladies find a reason to laugh. Kandi had given her sex balls a couple months ago. Porsha found the empty box of the toy inside one of her boxes.

Kenya is also surrounded by boxes. She is moving out with the help of family friends. As of now, she’s kind of homeless. She has to move to a hotel. The hotel thing must be hurting her in way she hides. Maybe she can use that as an excuse for her actions.

She found her landlord wedding dress and being Kenya thought it would be funny to try it on and mock it. She was just leaving when her former landlord arrived two hours early. Kenya had to vacate at 5 but the lady came at 3. At first there were threats and then the other woman called the cops. She told the operator Kenya was trespassing.

Kenya left without someone stopping her.