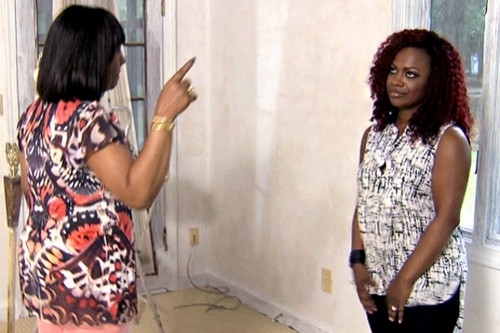 Tonight on Bravo THE REAL HOUSEWIVES OF ATLANTA continues and tonight’s episode is called, “Girl Code Breakers.” On tonight’s NeNe is over Kenya’s antics, and takes her to task for breaking the girl code by texting Apollo.  Did you watch lastweek’s season 6 premiere? We did and if you want to get caught up before tonight’s episode, you can read our full and detailed recap, right here.

On last week’s episode Porsha struggled to accept that her troubled marriage was really ending, while Kandi held back from making wedding plans with Todd. Phaedra and Apollo couldn’t see eye-to-eye when it came to caring for their new baby boy. At the Grand Opening of Industry Studios, Cynthia and Peter’s new fashion business venture, NeNe had no time for Kenya’s friendship complaints.

On tonight’s show Kenya goes to court to fight her eviction, Porsha moves in with her mom, and Cynthia reveals that for years she’s been hiding a debilitating condition. NeNe is over Kenya’s antics, and takes her to task for breaking the girl code by texting Apollo. Kandi tries to get her mom to accept Todd, but Joyce has deep suspicion of him.

Tonight’s episode is going to be another drama packed one, which you won’t want to miss. So be sure to tune in for our live coverage of Bravos’ The Real Housewives of Atlanta Season 6 episode 2 – tonight at 8PM EST! While you wait for our recap, hit the comments and let us know how excited you are about the new episode of RHOA tonight.

Kenya won her lawsuit against her landlord. They very same landlord that went to the press with stories she wasn’t paying the rent. Well, the judge ruled in Kenya’s favor thereby allowing her to vacate on her accords. What does she does right after her triumph she goes to the barely visible media presence to discuss how she knows who her friends are. A subtle dig at Nene that she doesn’t bring up later when she joins for lunch.

Nene still isn’t apologizing for all the things she apparently did to Kenya. Nor will she buy any of Kenya’s fake tears. She didn’t know Kenya was close to eviction if she did then she’d be there in a quick minute but the whole inviting Kenya’s ex needs to be dropped. Nene wasn’t the ont that broke any girl code. Kenya was or does she not remember when she implied she and Apollo were texting. Kenya clears that up with Nene to say that never happened and Nene is willing to buy her story. She wants to set up a meeting with all the girls to clear up the air.

Already in a bad mood Porsha has to look forward to her checks. Her husband not only wants to humiliate her but he wants use money as a way to cage her in. She’s at the pont where she has to borrow from her mother.

Another person down and out is Cynthia. She’s been ill for a while. She’s going through pregnancy highs and lows with one glaring problem – she isn’t pregnant. It’s her fibroids. She’s been gaining weight and going through cravings and her husband hasn’t been sympathetic at all. He doesn’t understand why she can’t work the extra weight off. He thinks she could almost get over it if she tried. Luckily Cynthia won’t have to deal with her fibroids for long. She’s looking into medical intervention.

Despite her mood swings, Cynthia does her best to remain upbeat when she visits Kandi. Before other guest begin to arrive, Kandi wants Cynthia’s opinion. Her mother doesn’t like Todd and feels like he’s a gold digger. Cynthia was in the exact same position. Cynthia advise her to just set some limits and if her mother doesn’t want to follow them then she won’t be as involved in their lives as she used to be.

The other girls arrive including Porsha with her new haircut. What they can’t help but discuss is Kenya. Frankly they all felt she went too far on the after show. Most of the girls feel like Nene. Getting involved with someone else’s husband is too much. Especially if she could do that to one of them then she could do it to all of them.

Phaedra has been doing a lot of things at one time. She’s running her practice, studying for her mortuary exam, and raising her two boys. One a toddler and the other a newborn. While she’s doing all of this Apollo hasn’t been as helpful. He feels he’s doing more renovating the house than she is with her jibs. They got help after all.

Nene did as she promised. She got the group together in order to discuss how they’ll al move on. Kenya doesn’t really help her case much but Phaedra agree that can at least co-exist in the same space. Not that Phaedra forgot Kenya accused her and Apollo of having Aids or texting her husband which was never right no matter how innocent Kenya now claim it was. They’ll stick to each other corner and Nene will call it a victory.

Porsha moved in with her mother who was gracious enough to give her the master bedroom. But there is trouble ahead. Her lawyer informs her that Kordell is packing up her stuff himself. She’s livid to learn she won’t even get the opportunity to pack for herself.

Kandi tries to talk to her mother about Todd. She tries to say Todd helps around the house but all her mother wants to know is if Todd can provide for her. She doesn’t want her daughter to be paying for someone for the rest of his life. Pre-nup can be broken and the mother wants Kandi to know this and be on guard.