The Real Housewives of Atlanta RECAP 11/3/13: Season 6 Premiere “Bye Bye With The Wind” 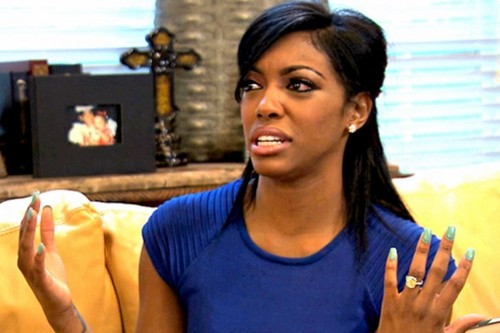 Tonight on Bravo is the season 6, premiere episode of THE REAL HOUSEWIVES OF ATLANTA and tonight’s episode is called, “Bye Bye With The Wind.” On tonight’s show Porsha struggles as her marriage ends, while Kenya complains that the other ladies are too busy for her friendship.  Did you watch last season’s finale? We did and if you want to get caught up before the premiere of the new season, you can read our full and detailed recap, right here.

On last season’s final show Bravo gave viewers an inside peek at never-before-seen footage with the Secrets Revealed special, which featured Phaedra’s pet funerals, additional footage of the return of Kim Zolciak, and the ladies’ reactions to the reunion.

On tonight’s show Porsha struggles to accept that her troubled marriage is really ending, while Kandi holds back from making wedding plans with Todd. Phaedra and Apollo can’t see eye-to-eye when it comes to caring for their new baby boy. At the Grand Opening of Industry Studios, Cynthia and Peter’s new fashion business venture, NeNe has no time for Kenya’s friendship complaints.

Tonight’s episode is going to be another drama packed one, which you won’t want to miss. So be sure to tune in for our live coverage of Bravos’ The Real Housewives of Atlanta Season 6 premiere – tonight at 8PM EST! While you wait for our recap, hit the comments and let us know how excited you are about the new episode of RHOA tonight.

Nene and Greg are back and their opening their wedding gifts. Everyone gave them such beautiful gifts. Even Porsha gave them something nice. Nene was weary about her gift. She figured right about now Porsha would be bitter over her divorce. Greg on the other hand feels that maybe Porsha and Kordell can get back together just like they did. But Nene thinks Kordell took it way pass any chance of a reconciliation.

Porsha has to deal with the meetings lead up to a divorce. She went to see her lawyer and she told him that if Kordell tries to fight her on anything then there are many things she witnesses and that have supposedly happened to her that she has no problem testifying about. Yet in the end she’s willing to scrap all of this if her husband agrees to work on the marriage with her. She wants to go to therapy and have things be different but she believes a marriage shouldn’t be so quickly discounted.

Speaking of discounting marriage. Cynthia is moving her modeling agency into her husband’s building. The very same building he bought with their money and yet didn’t tell her about until six months had passed. However she’s learning to work through that when in walks Kenya during her former agency’s demolishing. Mind you she hasn’t seen Kenya in months.

The first thing Kenya does when speaking to Cynthia is wonder why no one got in touch with her seeing as she was going through a very public feud with her landlord. She wasn’t expecting anything from Porsha or Phaedra but Kani and Nene were friends. Cynthia warns her she burned a lot of bridges. Still Kenya isn’t really hearing anything and so she’s told she can deal with everything at her new opening party. She invited everyone and there Kenya can get the answer on why Walter was invited to Nene’s wedding.

It’s good she won’t get into any Phaedra’s drama. Phaedra and her family recently moved into a new home their renovating. On top of that she just had second baby that was delivered through an emergency caesarean. She simply doesn’t have time.

Kandi and her fiancé are enjoying a morning at home when they bring it up all the things people have said about their engagement. Sure there’s rumors that she’s his sugar momma but to have her own mother think it makes worse. Then moving on to number one topic with everyone they discuss Porsha. He feels that the girls ruined Porsha’s marriage. He says they interfered and when they get married no one will be interfering with their marriage.

Porsha is still wearing her wedding ring even to lunch with Nene. Nene doesn’t get it but she won’t say something against Kordell. Not when Greg did her wrong during their divorce.

After Kordell’s disposition, Porsha is hurt. Hearing the truth about their marriage in open court only served to hurt her. Kordell admitted in court he used to lock Porsha out when she came after a certain time. Once he says all of that though he doesn’t have a reasonable excuse on why he walked out. Her mother and sister stopped liking him long ago ever since Porsha’s miscarriage. She tried to give him chance to work it out and he turned it down. Now she’s going to stop being the naive girl he knew.

The time has come for Cynthia’s party. Everyone is enjoying the view until Kenya arrives. She says she didn’t want to start anything yet she does. The other girls tried to escape her by disappearing among the crowd but Kenya hunted them down in order to get the answer on why no one was supporting her in her hour of need. Kandi left the party early and Porsha was stuck with Kenya giving fake concern on her divorce. Lukil nothing happened then.

Kenya then went looking for Nene. She was mad Nene didn’t reach out to her. She was mad nene invited Walter to her wedding despite the fact she didn’t attend. Nene tries to walk off and Kenya follows her. She’s so busy getting into Nene’s face that she doesn’t realize how crazy she looks.