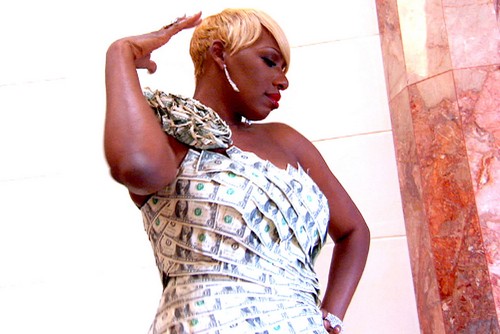 Tonight on Bravo is the season 5 ninth episode of THE REAL HOUSEWIVES OF ATLANTA and tonight’s episode is called “Dress Down and Strip Bare.” On tonight’s show With the ladies back from Anguilla, it’s time to see where relationships stand, and Kenya and Walter are in the romantic hot seat. After avoiding each other, the couple finally agrees to lunch, but Walter says he doesn’t think Kenya is wife material! Did you see last week’s show? We did and we recapped it here for you.

On last week’s show as the Anguilla trip came to an end, there was still plenty of unfinished business to be addressed. Kenya hoped to leave the island with at least an engagement ring, while NeNe focused on squashing her bumpy past with Kandi. Cynthia works to clear the air with Kenya, but Porsha ket her guard up in case Miss USA decided to come for her again. Tensions rose at the final vacation dinner when one couple got thrown into the hot seat.

Tonight’s episode is going to be another drama packed one, which you won’t want to miss. So be sure to tune in for our live coverage of Bravos’ The Real Housewives of Atlanta Season 5 episode 9— tonight at 9PM EST! While you wait for our recap, hit the comments and let us know how excited you are about the new episode of RHOA tonight and check out the sneak peek video below of tonight’s premiere!

Tonight’s recap: After butting heads the past few episodes it was pretty interesting to see tonight’s show start with Nene and Kenya meeting for lunch. Nene admits that relationships are tricky and so she’s trying to grasp the ying and yang between Kenya and Walter. After talking she all but tells Kenya that Walter’s just not that in to her and it’s time to move on.

Kandi is also trying to figure out where her relationship with Todd is.  After two years she figures they better be on the same page and they are definitely not like Kenya and Walter with totally different relationship ideas. After nearly pummeling Kenya for putting her hands on Apollo, Phaedra decides to take a totally different approach and keep her enemy closer. She wants Kenya to help with distribution of her workout tape. Kenya is totally on board, as long as it brings her closer to Apollo.

Kenya meets up with Walter to talk over how badly things went down in Anguilla. She says she walked away from him because she was abused in the past and she won’t let a man get an attitude with her at all. She tells him she’s wife material and she doesn’t want to pressure him but she expects to be married within six months. He kind of laughs at the amount of pressure that she just put on him. He tells her he loves her but not enough to go ahead and marry her. That pretty much spells it out for her completely.

Phaedra brings a pastor over to bless Kandi and Todd’s new home and Phaedra asks Todd if the next thing on the list is a wedding. Kandi kind of freaks because she doesn’t want to scare off Todd the way that Kenya sent Walter running.

Cynthia and Peter hear a rumor that Phaedra and Apollo’s marriage is on the rocks because of his strip club habit so they decide to meet up with the couple- at a club. They pick a place that is for senior citizen dancers and nearly die on the spot at the sight of these ladies. As Peter puts it, “Her boobs are 20 but her age is really 90!”

The gang all gets together and the guys do shots as the ladies show off their dresses. Apollo is talking about his 6 year prison term and how for 16 months straight he was confined to a cell. He signed up for trash detail just so that he could go outside. Walter actually shows up for the event, but walks right past Kenya. He tells the guys he’s sick of the pressure from her but does go and say hi to Kenya with a whole lot of prompting.  I’m not sure who is more over this relationship, Kenya or Walter. We’ll have to tune in next week to find out.