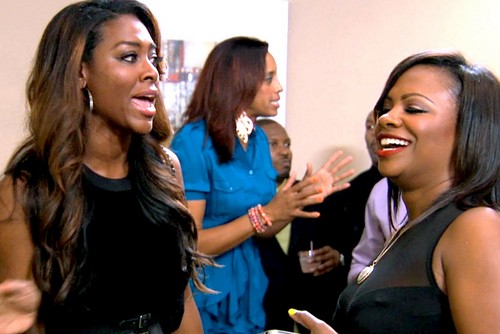 Tonight on Bravo is the season 5, eighteenth episode of THE REAL HOUSEWIVES OF ATLANTA and tonight’s episode is called “He’s Stalking, I’m Walking.” On tonight’s showKenya thought she had extracted Walter from her life, but the men keep inviting him around. Did you see last week’s show? We did and we recapped it here for you.

On last week’s show after leaving Hollywood, the Atlanta ladies headed down to Sin City for the ultimate girls’ weekend in Las Vegas. When Porsha refused to go to the strip club because of Kordell’s alleged objections, the ladies decided to school her on how to gain some independence in her marriage. Kenya could’t play nice with Phaedra forever and finally confronted her on the last night of their trip.

On tonight’s show After being teased by the women in Vegas about whether or not she’s pregnant, Porsha waits to take the test until she’s home in Atlanta with Kordell. NeNe travels to NYC for a whirlwind press tour to promote her sitcom, while Kandi’s stretched to the breaking point with renovations of both her business and her home. Kenya thought she had extracted Walter from her life, but the men keep inviting him around; the talk soon turns ugly and rumors begin to fly.

Tonight’s episode is going to be another drama packed one, which you won’t want to miss. So be sure to tune in for our live coverage of Bravos’ The Real Housewives of Atlanta Season 5 episode 18— tonight at 8PM EST! While you wait for our recap, hit the comments and let us know how excited you are about the new episode of RHOA tonight and check out the sneak peek video below of tonight’s episode!

Tonight’s episode of The Real Housewive’s of Atlanta begins with Porsha’s husband finding her pregnancy test. She goes into the bathroom to take it and it comes up negative. Porsha admits that she and Cordell don’t seem to be on the same page about babies and he doesn’t seem to think that she’s ready for one.

Kandi has decided to launch herself into the trifecta of all stressful projects. Remodeling a new home, remodeling work offices and planning a housewarming party. She figures she must be crazy to do all 3 at once.

Porsha talks to Cordell about how the other ladies think he’s controlling. He says that he is in control, but not controlling. They then move on to baby talk. Cordell puts it simply, he asks her if she wants a baby or career and makes it sound like she has to choose.  She says she can keep throwing charity events and hire a nanny. Cordell disagrees and tells Porsha that if they have a baby then he expects her to be there to feed it.

Peter throws a mens health charity event and get ready for fireworks because both Walter and Kenya are invited. Kenya brings an ESPN commentator and figures they will be seated near Walter, just because. Peter actually introduces Cynthia’s ex to speak. They have managed to become good friends I guess. Kenya is in the hot seat, being eyeballed by Walter and by Phaedra. She eventually exits long before everyone else. Good thing because she missed Walter calling her too old to hit. He likes his women young and won’t screw anything over 32.

Before leaving Kenya makes peace with Phaedra once and for all, then invites her along with all the other ladies to the costume ball she’s throwing.

Cynthia hangs out the next day with Kenya and she admits that she never had sex with Walter. She even eventually asked him if he was gay. Obviously their relationship was never gonna last.

Kandi finally has her house warming party and the girls are stunned by it. She down played it completely and they absolutely love what she did with it. Walter of course shows up, with a new lady. Kandi isn’t surprised because Walter is in good with the guys. Walter knows Kenya said he was gay so he is ready to let her have it.  Kandi tells Kenya that he is there and she finally flips out. Tune in next week to see what happens.