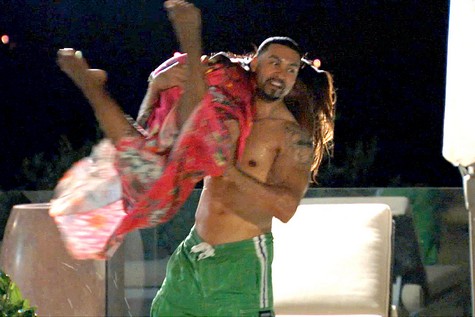 Tonight on Bravo is the season 5 sixth episode of THE REAL HOUSEWIVES OF ATLANTA and tonight’s episode is called “Hold on to Your Weave.”  On tonight’s show the ladies of ATL don’t waste any time getting over the big blowout with Kim and head to Anguilla in style. After a relaxing evening, Phaedra is pushed to the limits when Kenya once again flirts with Apollo, and to make matters worse, NeNe hops in and says Apollo has a teeny weeny.

On last week’s show as the ladies planned their trip to Anguilla, tensions rose and their friendships were questioned. Cynthia and Peter welcomed lovebirds NeNe and Gregg over for wine to discuss the new plan for a couples trip, while Kenya and Phaedra double dated with their men at a local amusement park. Porsha was ready to double her fertility trouble as she revealed that she would do anything to have twins. The ladies all gathered for brunch and things turned ugly in a face off as Kim’s commitment to friendship was called into question and her excuses were not excused.

On tonight’s show as the ladies deal with the aftermath of a blowout with Kim, Cynthia and Peter decide to move forward and invite another couple to fill Kim and Kroy’s place: Porsha and her NFL-star husband, Kordell Stewart. Once in Anguilla, the couples all frolic with their partners, but tensions flare when Kenya gets flirtatious with someone other than her own man.

SEE: Kim Zolciak Might Go To Jail For Tax Evasion

Tonight’s episode is going to be another drama packed one, which you won’t want to miss. So be sure to tune in for our live coverage of Bravos’ The Real Housewives of Atlanta Season 5 episode 6— tonight at 9PM EST! While you wait for our recap, hit the comments and let us know how excited you are about the season premiere of the RHOA and check out the sneak peek video below of tonight’s premiere!

Oh boy. The first ten minutes of tonight’s show is devoted to all of the ladies dishing on and bitching about their gut level hatred for Kim. If you missed last week, the episode ended with Kim storming out of brunch and quite literally, off the show. Kim was going to be 30ish weeks pregnant and didn’t want to leave the country for a couples trip with the rest of the cast. Of course that didn’t wash with any of them and Kim wasn’t going to be bullied.

Cynthia invited new housewife Portia and her football playing husband out to dinner with her and Peter. Unfortunately, only Portia shows, making it momentarily awkward. Peter loves football and really wants to hang with Portia’s husband. Peter invites the new friend and her husband on the planned couples trip.

The couples all fly and then grab a boat to get to Anguilla. Kenya decides to scare the crap out of everyone by taking the wheel and speeding the whole crew across the water. Cynthia falls out of her dress and NeNe is screaming that it’s the worst boat ride ever.  Kenya eventually checks out her room and is seriously crying on her bed with Walter asking if she has had her meds. Why the meltdown? Because there is no real bathtub and the toilet is in the bathroom not in a private area.

Kenya really is an idiot. Her boyfriend Walter is on this trip with her, yet she continues to flirt with Phaedra’s hot husband, Apollo!  Ironically, Kenya is campaigning for a ring, an elopement, marriage. She is pushing hard but then flirting right in front of Walter. I’m surprised he is even with her here. Phaedra doesn’t take another woman flirting with her husband lightly. The next morning she shows up for breakfast wearing a thong covered by a fishnet dress.  Apollo’s eyes will only be on her on this day. Even Phaedra calls it her stripper swimsuit.

Phaedra arranges for the gang to have a troupe of dancers perform a routine that looks like it belongs in a strip club. Ex-stripper NeNe jumps on board and starts to teach the ladies how its down. Kenya decides to shake and grind on Cynthia’s husband while Walter looks on. Then Kenya moves on to a completely random guy. I seriously doubt this ding bat will go home with a boyfriend let alone be getting engaged! Tonight’s show wraps up with Kenya asking Phaedra if she were to offer two of her friends to her man, who she’d pick. Phaedra is about to lose it, tuine in next time to see what happens!