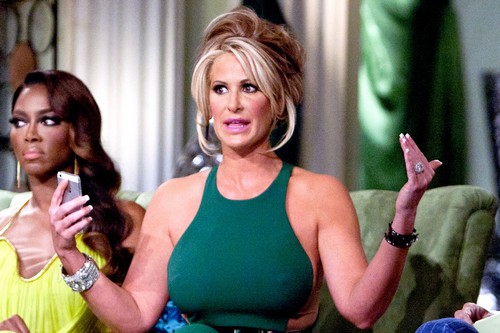 Tonight on Bravo is the season 5, twenty-two episode of THE REAL HOUSEWIVES OF ATLANTA and tonight’s episode is Part 2 of the reunion show. On tonight’s show Kim Zolciak returns to hash it out with the women and to reflect on her departure from the show.  Did you watch last week’s episode? We did and we recapped it here for you.

On last week’s show now the ladies took time to take to the couches to discuss this season’s drama, catfights and screaming matches.  This year Bravo is splitting the reunion into three parts.  Tonight is part 2 and if you take  a look at the preview below it looks like the housewives are dressed to the nines for the reunion.

On tonight’s show in the Reunion Part 2, Kim Zolciak returns to hash it out with the women and to reflect on her departure from the show. NeNe puts Phaedra in the hot seat over behind-the-scenes drama that has never been revealed and Kenya joins in on the attack.

Tonight’s episode is going to be another drama packed one, which you won’t want to miss. So be sure to tune in for our live coverage of Bravos’ The Real Housewives of Atlanta Season 5 episode 22— tonight at 8PM EST! While you wait for our recap, hit the comments and let us know how excited you are about the new episode of RHOA tonight.

The first question thrown out for part two of the reunion was to Nene. Andy wondered why she seemed to be enjoying the infighting. She explains how she tries to give everyone a chance but some of the newcomers tend to attach themselves to other people quickly. Kandi and Phaedra quickly disagree to that statement. Both of them feel that they weren’t given a fair chance but got shut down from the beginning with Nene.

Nene was asked about her relationship Greg. She explains that her success originally hurt her relationship with her ex/fiancée. She even goes to say the rumors about her and Peter helped to tear her and Greg apart.  One of the instigators were Phaedra. Phaedra claims she wasn’t out to destroy Nene’s marriage. Kandi adds how Nene would jokily flirt with Peter.

Phaedra gets asked about the infamous kiss when she nearly ate half of Apollo’s face off. She says it wasn’t damage control just them. But then conversation is turned to Phaedra throwing shade behind the others back. Nene accuses Phaedra tries to talk crap with her half-sisters. Nene says she forgiven but never forgotten.

Phaedra denies she tried to talk trash to Nene’s family. Kenya pushing herself calm downs the situation but it doesn’t stop Andy from telling Nene that she hasn’t forgiven Phaedra. Grudgingly Phaedra apologizes for what Nene assumed she did.

With the fight over, Andy stirs up more drama by bringing in Kim. She says that there is no awkwardness. Andy replays Kim’s final moments on the season leading up to her exit. When the footage ends and Andy questions Kim about all her excuses, she tries to explain that she had a lot going on. Surprisingly Cynthia tells her that they were all sick of her reasons to cancel or leave early.

Kandi and Kim go at it over the excuses with Kandi not buying it. Side note: Kim isn’t wearing a wig.  It appeared after Kim left, that the other girls bonded better. The conversation turns toward Kim’s reaction to Kandi’s new house. Even though she explains she heard only bad things about the neighborhood. She didn’t mean to insult Kandi or her house. Nene accuses Kim for sometimes being a racist. Especially with the things she says.

Kim tells Andy about her relationship with Kandi dissolved fairly quickly. Nene and Kim say goodbye in their weird friendship way but the drama is just beginning. There’s a Part Three of the reunion coming up. The husbands finally join the women. Peter tries in vain to defend Walter his new friend. Apollo and Kenya have it out about who was chasing who. Then finally, someone tells Porsha her husband was crap.