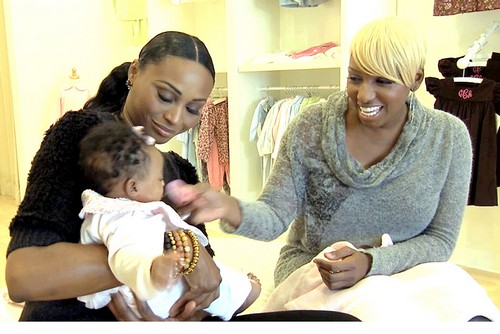 Tonight on Bravo is the season 5, tenth episode of THE REAL HOUSEWIVES OF ATLANTA and tonight’s episode is called “Off the Hook.” On tonight’s Nene embraces her Glam-mama status, while Kenya continues to pressure Walter. Did you see last week’s show? We did and we recapped it here for you.

On tonight’s show as NeNe prepares to leave for LA to begin shooting The New Normal, she has many challenges thrown her way. Kandi and her boo continue to settle into their new life together, causing her to confide in Porsha about the thought of marriage. A pre-nup conversation is far off for Kenya — things haven’t been right for a while with her and Walter. After heart-to-hearts with Aunt Lori and Kandi, she takes Walter on a fishing date to give it one last shot at reeling in her man.

Tonight’s episode is going to be another drama packed one, which you won’t want to miss. So be sure to tune in for our live coverage of Bravos’ The Real Housewives of Atlanta Season 5 episode 10— tonight at 8PM EST, yes a new time! While you wait for our recap, hit the comments and let us know how excited you are about the new episode of RHOA tonight and check out the sneak peek video below of tonight’s episode!

Tonight’s episode of The Real Housewive’s of Atlanta begins with Nene cuddling with her grand daughter. She refers to herself as the “glamother”. She found out that her son Bryson was going to be a father when she bumped into his girlfriend out in public. At the time she was 6 months along and informed Nene that her son was the father. Nene tells him all about being responsible and how hard it is to be a parent at 21. That’s the age that she was when she had him so she certainly knows the ropes.

Kandi and Todd seem to be doing pretty well in their new house. Todd is definitely getting along well with Kandi’s daughter and I’m going to go out on a little limb and say that I could easily see this little family becoming permanent.

Oh boy. We go from stable to absolutely bonkers. Of course I’m talking about Kenya. She’s having lunch with her aunt boo-hooing over how Walter won’t lay a finger on her. Probably because if you try to bully a guy into marrying you he inevitably runs like hell!

Nene decides to take her glam baby shopping with Cynthia and she dishes on why she hasn’t made a huge announcement about the baby being born. She seems very balanced and is really clear that it’s her sons child, she gets to spoil her and then she hands her back to her mom and dad.

Kenya is off to a photo shoot for Krave Magazine and she is utterly confused. She says she has so many men wanting her hot a**, well except her her own man. Kandi shows up for the shoot and of course Kenya only talks about Walter and the state of their relationship. Kandi tells her to revaluate her relationship because Walter doesn’t seem very into her.

Cynthia has decided to host a cocktail party for Nene and you know what that means, it’s another chance to get all the ladies together in a confined space to fight! Kenya incites laughter by insisting that every single day of her life someone mistakes her for Beyonce. Well, before the laughter came the crickets. You know, that moment when everyone stared at her in disbelief?

Kenya decides to get to the bottom of things with Walter and takes him fishing. She wants to know what she did to piss him off. He tells her for the millionth time that he feels pressured. She starts whining about how unloved and uncared for she feels and Walter is more interested in chewing his gum than trying to pacify her insecurities.

Kenya finally sees the light and realizes she has wasted two years of her life with Walter and he couldn’t agree more.

Tune in next week for more of The Real Housewive’s of Atlanta!