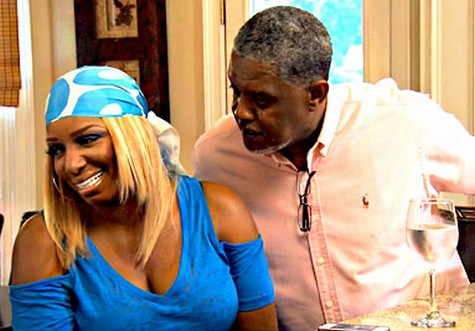 Tonight on Bravo is the season 5 premiere of THE REAL HOUSEWIVES OF ATLANTA and tonight’s premiere episode is called “Got Sexy Back.” This season the ladies of  Hotlanta are joined by two new cast members, Kenya Moore and Porshe Stweart, who don’t waste any time turning up the heat.

The new season will be just as drama filled if not more than the past four seasons! We can look forward to seeing NeNe Leakes working in Los Angeles as an actress. Tamara Tattles reports the housewives grudgingly fly out to shoot with NeNe, who isn’t interested in shooting with them either. Tamara Tattles also says there is a trip to Anguilla with the husbands. Anyone who watches the Housewives franchise knows that a trip equals drama!

It appears as if Cupid shot an arrow into the A-T-L this season as NeNe looks at a possible reconciliation with Gregg, and Kandi is moving in with her new man. Remember the beef between NeNe and Kim? Don’t worry, these ladies haven’t skipped a beat as the drama picks up right where it left off!

On tonight’s show it looks like Cupid shot an arrow into the A-T-L as NeNe looks at a possible reconciliation with Gregg, and Kandi and her new man are moving in together. Meanwhile, pregnant Kim faces a potential eviction from her dream home and Phaedra expands her mortuary visions to new realms. One of the newest Housewives is introduced with a bang: former Miss USA Kenya Moore shows the ladies who’s boss at a Bailey Agency event, but Cynthia reveals she has a backbone and refuses to take a backseat to the new beauty queen.

Tonight’s episode is going to be another drama packed one, which you won’t want to miss. So be sure to tune in for our live coverage of Bravos’ The Real Housewives of Atlanta Season 5 premiere — tonight at 9PM MDT! While you wait for our recap, hit the comments and let us know how excited you are about the season premiere of the RHOA and check out the sneak peek video below of tonight’s premiere!

Tonight’s recap: The season premiere starts off with NeNe talking about how her career and life are both booming. She’s ready to begin shooting a sitcom and she has wrapped her head around splitting with her ex husband, Greg. She’s in a good space which is probably exactly the reason that Greg wants her back.  Kandi has a new relationship brewing- or at least it’s new to viewers. She’s actually been dating Todd for a year and they met while on the trip to Africa that we all saw last season. They are talking about having kids and Kandi really wants a son since they are living together with both of their daughters.

Kim and Kroy are prepping for KJ’s first birthday and true to form, Kim is opening all of his gifts. Kim explains that even though she is renting her dream home, it was appraised for a million dollars less than it’s on the market for so they are moving rather than buying it.

Phaedra is studying mortuary sciences still and she decides to pay a visit to a prominent veterinarian. She lets this chick know that she wants to become like the Vera Wang of funeral services and that includes providing services for pets!  She asks the vet to keep her in mind and to refer her to patients.

Cynthia is at odds with her ex because her daughter Noelle has been home-schooled for the last year. Everyone seems to believe Noelle should be in real school- including Noelle, except Cynthia. I’m not quite sure why she was home-schooled in the first place but Cynthia obviously alone in thinking it was for the best.

Kenya is a brand spankin’ new housewife and she jumps into the mix by meeting with her friend Miss Lawrence for lunch. Lawrence has fluorescent nails and is most definitely a dude. Kenya is a hustler. She produces, writes, acts and so on. She is pretty much married to her job but is ready to get married and settle down.

Kandi takes Kim for a walk through her new home that she is remodeling and Kim is not at all impressed. The mayor lives around the corner but Kim still insists that the neighborhood is bad. She’s making nit picking comments about Kandi’s house but the fact is, Kim and her family have just gotten evicted so she’s in no position to talk!

Cynthia is still running the Bailey Modeling Agency and she’s looking for a woman to be the Jet Beauty of the Weekso she pulls Kenya in to help her look at the potential models. Kenya is a former beauty queen with a gutter mouth and believe me as soon as she starts rambling everyone is uncomfortable. She starts fighting with everyone and Cynthia may be the owner but she’s having a rough time taking control.

She attempts to set rules for how the auditions should be carried out and then she aimed to encourage the girls that Kenya blatantly insulted.  The fight between these two ladies is on already! Tune in next week for more drama!