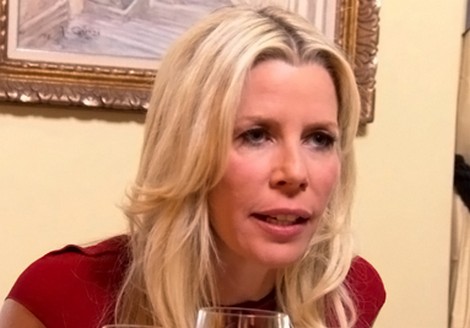 Tonight on Bravo is an all new episode of the Real Housewives of New York called “All How You Spin It”. On Tonight’s episode Ramona and Sonja skip out on Aviva’s charity event, and Aviva freaks over their lame excuses. While they were too busy for Aviva’s children’s charity, they do make time to go to the butt doctor together. If you missed last week’s show called “This Party Is Toast” there is a full and detailed recap HERE for you!

The last time we saw our favorite housewives with more holiday parties and that can only mean one thing for the NY housewives, more fighting! Carole’s holiday gathering started off calmly enough. The wives and their husbands had an unorthodox gift exchange, featuring everything from cock rings, to live lizards.

On tonight’s show Aviva hosts a charity event at Soul Cycle to raise money for children who need prosthetics. Ramona and Sonja are no shows, which angers Aviva, who thinks that if booze was served, they would’ve showed up to support her.

Aviva and Carole meet at a jewelry store where Aviva tells Carole she’s most likely not going to make it to St. Barths because of her fear of flying. After raising money at the Soul Cycle event, Aviva brings Carole and her son, Harrison to “A Step Ahead,” where she presents a young boy named Jake with a pair of prosthetic running legs.

Tonight’s episode starts off with a bang, picking up where last week’s fight left off.  Heather and Ramona are at each other’s throats because Heather point blank referred to Ramona as crazy.  Ramona’s husband Mario decides to try to talk to Heather about insulting and disrespecting his wife and while Heather apologizes for calling her crazy, she will not concede anything else.  Aviva decides to jump on the bandwagon and basically calls Heather a horrible person for not inviting Ramona to London with everyone else.  Don’t forget, THAT is actually what started this ridiculous catfight that looks like it’s not going to end anytime soon!

Aviva invites all of the ladies to a spin class that is benefitting children that need prosthetic limbs.  We all know by now that Aviva has a prosthetic limb and this cause at least makes sense.  Some of the kids are actually in attendance and the spin room is packed.  All of the ladies show up to support Aviva except Ramona and Sonja.  Instead they decide that beautification is far more important so Sonja has work done to tighten her abs, Ramona strips to her hot pink panties and simulates sex while waiting for the numbing cream to be applied to her rear end before her procedure.

The whole gang is plotting a trip to St. Bart’s and of course Aviva is stressing about even the possibility of going on the trip.  She’s afraid to leave her husband, she’s afraid to travel in a small plane, and she has panic attacks. Carole tries in vain to convince her that the chance of something happening to her is a million to one but after losing her foot at the age of 6 she knows that those crazy odds do happen.

Ramona invites everyone over for lunch and Carole upon arrival tells Sonja and Ramona that Aviva was very upset that the duo decided not to show up for her charity event.  Both of the ladies sit there and lie through their teeth about why they were missing the event. I’m sure when Aviva watches this episode her head is going to spin! Ultimately, Ramona hands her a check to buy her way out of trouble. Sonja then snips about not being able to do the same and how Ramona just made her look horrid. These women are so wishy washy it’s ridiculous. They are your friend only when in front of you!

Next week the girls are heading off to St. Barts and you KNOW the fights there will be epic!