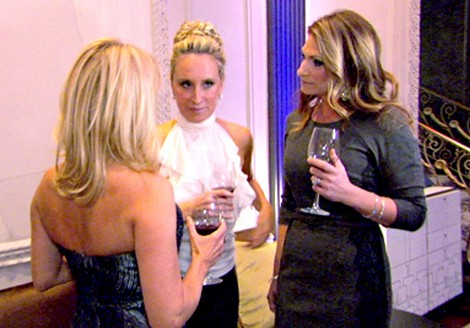 Tonight on Bravo is an all new episode of the Real Housewives of New York called “This Party Is Toast”. On Tonight’s episode the holiday parties continue to be dramatic, with Ramona and Heather facing off again.   If you missed last week’s show called “You Want to What Me in the Where?” there is a full and detailed recap HERE for you!

The last time we saw our favorite housewives Heather and her branding team of experts head to Sonja’s house for their second meeting and much to their surprise, Sonja has invited Ramona over as someone in her court to chat business and ideas. Later that night, Ramona invites all of the ladies and their significant others out to dinner — except for Heather.

On tonight’s show more holiday parties can only mean one thing for the NY housewives, more fighting! Carole’s holiday gathering starts off calmly enough. The wives and their husbands have an unorthodox gift exchange, featuring everything from cock rings, to live lizards.

Sonja invites all the women to a friend’s party and Aviva finds this a perfect time to ask LuAnn about the wine incident with Ramona, which confuses LuAnn as she’s already hashed it out with Ramona, and she questions Aviva’s intentions. Ramona overhears Heather talking to Aviva and she assumes Heather is talking about her. Ramona goes off screaming at Heather and then storms off.

Carole’s Christmas party starts with a bang the minute Aviva’s sex addict father, George, walks through the door.  She has what is called a White Elephant gift exchange which means that everyone opens their gift but can then trade it in for someone else’s’.  George has to make everything sexual and hits on LuAnn simply because she is seated beside him.  He turns a wine gift set into a sex toy by pointing out that part of it resembles a gay mans’ cock ring.

Sonja shows up for a photo shoot for her branding and Heather is supposed to be in charge of the shoot.  She is an hour late and seems to know nothing when it comes to professionalism on set or how to even shoot creatively.  She is more concerned with getting a scrambled egg than she is about working and finally Heather is truly pissed because she is wasting everyone’s time. It goes from bad to worse when Sonja informs everyone that she informs everyone on set that she had to change her tampon.  She drags her male friend into the bathroom with her to show him how bad she bleeds and how “young” her uterus is.

I’m actually a bit stunned by this whole fiasco with Sonja and this show hasn’t actually shocked me in a long time! The end result is actually pretty good. Sonja’s branding campaign looks good on paper but she is really disrespecting Heather.  Heather brought in everyone to shoot this whole project for free and Sonja actually had the nerve to say that Heather hadn’t done too much to help!

Carole invites the girls over to eat and Ramona is pissed off right off the bat because Carole wanted to order pizza. The girls rallied against that idea and they had to order salad instead.  Carole invites all of the girls on a trip to St. Bart’s and immediately Aviva starts about not wanting to go on her girl’s trip without her husband Reid.  She’s afraid to travel without him and Ramona actually says the most rational thing in the whole episode, she tries to reassure Aviva that they will all help her.  Aviva suggests bringing Reid and the girls aren’t thrilled with a man invading their girl’s trip.

Everyone meets up for Ramona’s magazine cover party and Sonja pulls Ramona aside to bitch about Heather at her photo shoot. She insists that Heather did nothing at her shoot.  Sonja then goes to tell Heather that she went to Ramona and badmouthed her behind her back. All three women get together and Ramona starts with Heather about not allowing her to be present at the photo shoot.  It turns into an ugly fight between all three with Heather really getting the crappy end of the stick.  As Carole puts it, she has yet to attend a party where Ramona hasn’t caused a ton of drama.

There hasn’t been enough drama in tonight’s episode, so let’s add a bit more!  Aviva decides, weeks after the incident to bring up LuAnn and Jacques grilling Ramona during a blindfolded wine tasting. Even LuAnn doesn’t know why it was brought up, Ramona still profits from her own brand of Pinot Grigio. Or as LuAnn put it, “Ramona drinks all the profit”.  Heather lambastes Aviva for looking for a fight and has had about all she can take with this sense-of-humor-less ladies.  Tune in next week because none of tonight’s issues have been resolved yet!