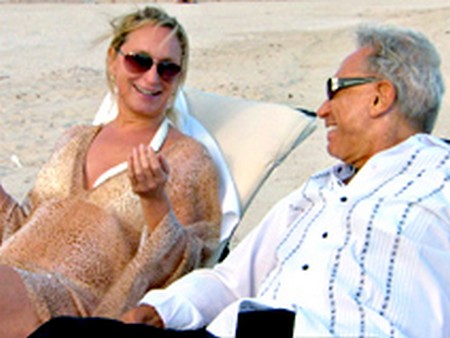 Tonight on Bravo is an all new episode of the Real Housewives of New York called “Dirty Ol’ Dad”. On Tonight’s episode Aviva’s dad attempts to charm Sonja (and the rest of the ‘Wives) in Miami. If you missed last week’s show called “Blinded By The Wine” there is a full and detailed recap HERE for you!

The last time we saw our favorite housewives Ramona, Sonja, Carole, and Aviva met for lunch to discuss London and the Anniversary Party. Aviva mentions going to Miami with Ramona and extends an invitation to Sonja to be set up with her sex-crazed father. Carole, coincidentally, will be in Miami at the same time.

On tonight’s show Carole and Sonja jet to Miami to meet up with Aviva and Ramona, and (of course…) Ramona manages to still find things to complain about while on vacation. Meanwhile, Aviva’s sex-obsessed father George makes a point to gawk at every Miami woman he sees, but switches his tune later on, claiming he’s only got eyes for Sonja….

On the last night in Miami, the ladies, their men and George head over to the Art Basel festival. Even though Sonja seems to have made it clear that she’s not interested, George is still trying. As the entertainment begins, Aviva pulls Sonja aside to ask how she deals with Ramona. The ladies return to the rest of the group and toast to a great Miami vacation.

And here is our LIVE RECAP – Enjoy our AWESOME presentation!!

It seems like the Real Housewives of NY spend a lot of time traveling to- well anywhere that gets them out of the city. Tonight the ladies are headed to Miami for some fun in the sun. Aviva is fully intending on hooking her FATHER up with Sonja and that alone is a great reason to watch. Did I mention that Aviva’s father is a self professed sex addict? Well, he is.

The ladies land in Miami and waste no time hopping into their swimsuits. Ramona starts to seriously stress over the very thought of Aviva’s artificial leg getting wet. I mean, she thinks it’s the end of the world and starts demanding that Aviva get out of the water and dry off! Ramona also admits to be very nervous to meet George, Aviva’s father- and she’s not even being set up with the guy!

George hits it off with Sonja in part because he is a real character.  The girls all show him their newest yoga face (think fish face) and he shows them his favorite face, which involves a whole lot of tongue action.  Methinks Aviva wasn’t joking when she called him a sex addict. Meanwhile Ramona is maybe a little drunk on her own special brand of pinot grigio.  She’s beginning to grate nerves and her bossiness is more than a little too much.  She is failing to control everyone’s conversation, but her effort is gallant.

The next day Sonja hits the beach with George hot on her tail.  She comes to the conclusion that he is even too much for her when he offers her a three hour sex session. She’s so not interested it’s ridiculous. Meanwhile, tipsy Ramona is letting George fall all over her after Sonja makes a bolt for the hot tub. As Aviva gets into the tub Ramona again begins flipping out because Aviva is not using her swimming leg in the water.

Carole heads back to the city early and decides to meet up with LuAnn.  She attempts to talk to LuAnn about how she feels the Countess is always trying to one-up her in everything. Carole seems to think that LuAnn missed the big point and I tend to agree.

Back in Miami, George is more than a little aroused by all of the well-dressed housewives and he makes sure Sonja not only knows, but feels it.  His inappropriateness sends her running.  Sonja ends up hiding out with Aviva, which gives Aviva the chance to talk to her about how to deal with Ramona’s overbearing behavior.

Tune in next time to see yet another meet up between Heather and Ramona, who have yet to play nice.