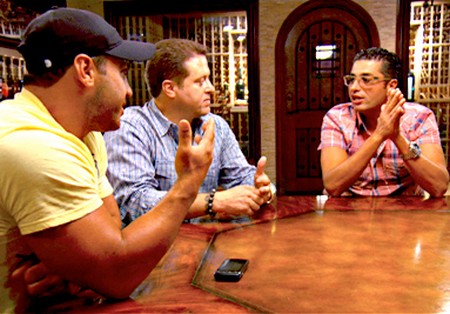 Tonight on Bravo is an all new episode of the Real Housewives of New Jersey called ‘Sit Down and Man Up’. On tonight’s Chris calls the husbands together for a sit down that exposes feuds and frail friendships. If you missed last week’s show called “The Jersey Side” there is a full and detailed recap HERE for you!

The last time we saw our Housewives everyone was putting on a show in New Jersey! Melissa polished up her act with Chris Judd, but was Teresa’s daughter, Gia, who threatened to upstage her at the live music festival.

On tonight’s show Jacqueline’s husband rallies the husbands of NJ before their trip to Napa, in hopes that drama will steer clear of his upcoming group trip. As all look forward to the ‘good and peaceful times’ ahead in CA, Melissa does a photo shoot for the cover of her upcoming album. She keeps it ‘all in the family’ while moaning in a photo-shoot with her youngest daughter by her side…

While Teresa is concocting the latest product in her growing business empire, Kathy makes her humble start at an old gelato stand in her native town of Patterson. An accusation that Teresa is stealing family recipes for her own financial gain throws ice water on Teresa’s reconciliation with Kathy.

Tonight’s episode is going to be filled with the usual Housewife drama and you won’t want to miss it, so be sure to tune in for our live coverage of the show tonight at 10 PM EST! While you wait for our recap hit the comments and let us know what you think of “The Real Housewives of New Jersey” season 4 so far! Also we have a sneak peek video of tonight’s episode “Sit Down and Man Up” below!

Tonight’s show: Tonight things start off rocky between Teresa and Joe. She’s talking AT him about her new Bellini’s called Fabellini and how she wants to brand herself. She slights Skinnygirl cocktails, by calling them “too diet-y” and then proceeds to wrangle with Joe. He tells her he found his wallet, but refuses to tell her what “friends” car it was in. He then tells her she sucks at driving and parks crooked.

The two arrive at a winery to figure out the right taste for her Fabellini. Joe is simply an idiot and an embarrassment to Teresa. He tells them that he doesn’t drink all week, but once he starts every Thursday it’s endless.

Teresa has a book signing and as she is meeting fans Joe is commenting on how much he hates these events.  Caroline comments about how she thinks that Joe resorted to doing shady things to quiet Teresa’s demands. Eventually, Caroline predicts that Teresa will leave him and show her daughters how to be strong.

Lauren Manzo has enlisted the help of Jacqueline in buying products for her new store, which she refers to as a “Sephora with services.”  Jacqueline is a make up guru and exactly the right person  to help launch this business.

Kathy and Rich pop in on Teresa’s book signing at the bakery.  She invites Teresa to her dessert tasting back in the old neighborhood.  The whole gang is there discussing everything.  Caroline comments on how both Melissa and Kathy are working hard to achieve their dreams.  Teresa shows up and starts comparing her events to Kathy’s and takes several shots at everything.  She comments on how the signs look like something her kids would make.

Teresa approaches Jacqueline and thanks her for the invite to Napa.  They have an awkward talk and Jacqueline wants to trust Teresa but doesn’t think it’s in her best interest to do so.

The guys all get together to have a Napa meeting.  They are worried about the drama between Teresa and Jacqueline and decide that the Gorja’s will be traveling in an RV with the Giudice’s. Joe Gorja predicts he’ll spend the whole time on the phone with the therapist.

Joe Giudice shows up for the meeting and the guys tell him to talk to Teresa.  Of course Joe turns it into a debate and starts trying to bash Jacqueline which isn’t going to fly.

Caroline isn’t looking forward to the Napa trip.  She knows Teresa will ruin things but intends to attempt to make the best of it.  Joe Giudice realizes he’s going to be in with the Gorja’s and turns into even more of an idiot than usual.  Joe Giudice starts ragging on Joe Gorja about the conflict between their families.  Their fighting snowballs into overall conflict between all of the husbands.  Ironically, the housewives think things will for the most part be ok, but the husband’s are now clearly at odds. Tune in next week for the Napa roadtrip fiasco!