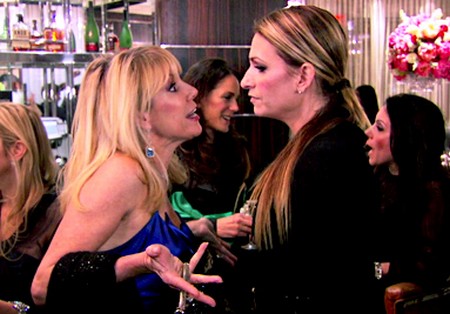 Tonight on Bravo is an all new episode of the Real Housewives of New York called “Good Trip, Bad Fall”. On tonight’s show It’s down to the ladies last days in London, and the built up tension between Carole, LuAnn and Heather builds up to an all-out “royal war.”  If you missed last week’s show called “I’m UK, You’re UK” there is a full and detailed recap HERE for you!

The last time we saw our favorite housewives it was London at last for (most of) the housewives! Carole, Sonja, and LuAnn arrived and lived it up in the London penthouse Heather arranged, but they show their “gratitude” by claiming she’s ‘lost it’ at her Yummie Tummie business dinner…

On tonight’s show Sonja, Heather, LuAnn, and Carole are finishing up their London trip with a day of fun and games. They head off for a very English game of croquet, but by this point, tension is building between Carole and LuAnn and Heather comments that we may be seeing the “royal wars.” In NYC, with very little time left to prep her anniversary party, Aviva is concerned with Sonja’s lack of party planning.

Ramona steps in to “check” on Sonja’s progress (Ramona sticking her head in Sonja’s business is sure to end smoothly…right?!)  Back in London, the ladies end the trip with a farewell dinner where Carole tries to give LuAnn a taste of her own medicine by “one-upping” everything that the Countess says. And with that, the ladies bid farewell to London and head back to the States.

Tonight’s recap:  Tonight’s episode begins with Sonja icing her face in the bedet, for no apparent reason. We also get another glimpse of Carole not liking LuAnn. She says no matter what she talks about LuAnn finds a way to one-up her. The snotty London crew are spending their last fun day playing Croquet. LuAnn and Carole both become pretty competitive while trying to learn the game. Meanwhile back in NYC Aviva is planning a dinner to celebrate her fifth wedding anniversary to Reed. Sonja is supposed to be her party planner but Aviva isn’t leaving it in her hands.

Aviva arrives back in the city the day of Aviva’s party and this is her first official Sonja in the City party event.  Could she get any closer to the wire? She seems more worried about her wardrobe then she is about the party.

Carole meets up with Aviva to fill her in on London.  It turns into another opportunity to rag on LuAnn.  Aviva does change the subject by talking about her anniversary party and how she left everything in Sonja’s hands.  I’m still not sure if that’s the best idea.

Oh wow. The, ahem, band, is a blonde in a bustier and leather with two back up dancers.  She can’t sing at all but keeps suggesting people “just do it”.  This is not the typical booty popping crowd and they all look mortified. Once the horror really registers, the amusement begins.  It’s a downtown performance for a stuffy crowd.  No clue what on earth Sonja was thinking. Aviva is so happy to be celebrating that even the performance couldn’t spoil her night.

Heather approaches Ramona to see if they can get along and Ramona is having none of it.  Ramona insists that Heather has bashed her behind her back.  She continues calling Heather a phony and a fake until Heather excuses herself.  Of course Ramona follows her.  Heather is talking to her in monotone until Ramona leaves. Now Heather is following her around the room insisting she’s not fake.  Tune in next week to see where this fight actually ends up!