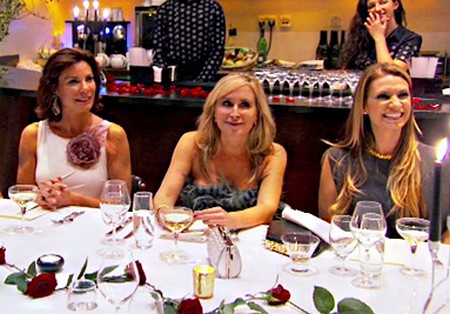 Tonight on Bravo is an all new episode of the Real Housewives of New York called “I’m UK, You’re UK”. On tonight’s show It’s London at last for (most of) the housewives! Carole, Sonja, and LuAnn arrive live it up in the London penthouse Heather arranged. If you missed last week’s show called ” The Cool Girls” there is a full and detailed recap HERE for you!

Spoiler alert: If you’re one of those people who doesn’t like spoilers, stop reading now! We have some juicy spoilers for you about the season 5 episode 6 of Bravo’s “The Real Housewives of New York!”

The last time we saw our favorite housewives, Heather invited Ramona shopping along with Aviva and Carole. When Ramona and Heather sat down to try and talk out their issues, things escalated quickly and Ramona left without an outfit or a London invite.

On tonight’s show It’s London at last for (most of) the housewives! Carole, Sonja, and LuAnn arrive live it up in the London penthouse Heather arranged, but they show their “gratitude” by claiming she’s ‘lost it’ at her Yummie Tummie business dinner…

Back in the big apple, Ramona and Aviva go retail therapy crazy trying to convince themselves that they’re having the better time.  Ramona and Aviva double date with their husbands back in NYC. Ramona comments that they are having a much better time than the London crew because there’s probably no way anyone can get a word in with Heather!

Tonight’s recap:  Finally, after weeks of talking about it, the ladies are in London!  Well, most of them anyway.  If you’ve tuned in the last few episodes then you already know that Heather planned a girl’s weekend there to offset her boring business trip.  She invited everyone but Ramona, which caused Ramona to lose her mind and drink way more Pinot Grigio than usual.  Aviva also stayed behind in NYC because she hates to fly.

Carole, Luann and Sonja put zing around London together discussing how they now have an excuse to drink all day because it’s almost rude not to enjoy a glass of champagne with lunch.  Luann keeps talking in a fake British accent which is driving Carole completely crazy.  Meanwhile Heather is wrapping up business for Yummie International.  A few interviews here, a formal dinner there and then she can spend time with the rest of the ladies.

Since Ramona and Aviva are both in NYC they decide to go shoe shopping together and it is absolutely absurd thanks to Ramona’s ignorance.  Aviva has a prosthetic leg and Ramona makes a spectacle out of both of them as she semi-demands a crash course in prosthetics.  Aviva says she feels like she’s dealing with an ignorant 6 year old as she explains she can wear heels, get a pedicure and go to the beach wearing the prosthetic.  Ramona is stunned and the sales clerk in the shoe store looks even more mortified than Aviva does.

The girls are supposed to go to Heather’s big dinner for Yummie International which is being held in the old House of Dior.  They shop a bit before hand, thumb their noses at London prices and then get dressed for the event.  Heather greets them and makes small talk about business and the venue itself.  As they are waiting for dinner to be served Heather stands and asks everyone to take a moment to stand, introduce themselves and then say something positive about Yummie.  Carole is horrified.  She feels like she’s back in high school and being put on the spot without knowing the correct answer.  She refuses to actually stand up but her writing skills come into play as she crafts a cute three line explanation that works.  Luann kind of dodges the whole point and just keeps saying cheers, to everyone in the room.  Sonja admits she’s never tried the product but she loves Heather and loves the event Heather has put together.