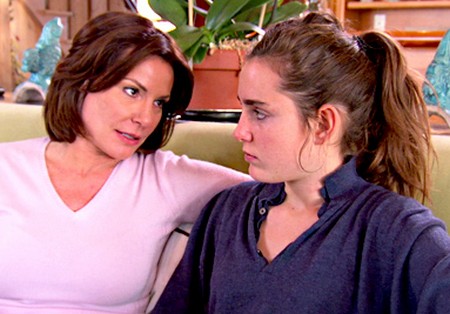 Tonight on Bravo is an all new episode of The Real Housewives of New York City. On tonight’s show Carole hosts a raucous downtown brunch, while Heather invites some of the ladies on an across the pond jaunt.  If you missed last week’s show called “Say What You Mean, Just Don’t Say It Mean”, we have a full and detailed recap here for you.

On last week’s show LuAnn and Ramona attempted to clear the air, while Sonja dealt with issues at her abode. LuAnn wanted Ramona to own up to blackmailing her, but Ramona saw it differently and denied any wrong doing.

On tonight’s show new housewife Carole openly comes on to Ramona’s husband, stating how she only flirts with husbands when their wives are sitting right next to them… LuAnn and Ramona decide to make peace, but LuAnn suspects it won’t last long.  Ramona takes the opportunity to apologize to Heather but gets a cold shoulder from LuAnn, who might not be ready to bury the hatchet.

Heather also makes a point to selectively invite only a few housewives to her next business trip to London.  Aviva Drescher is surprised to learn that the other ladies know her ex-husband.  LuAnn de Lesseps shares to her daughter that LuAnn is thinking about having another baby.

Tonight’s episode is going to be an exciting one that you won’t want to miss, so be sure to tune in for our live coverage of the show tonight at 9PM EST!  While you wait for our recap hit the comments and let us know what you think of season 5 of The Real Housewives Of New York City.

RECAP: It’s that time again!  You know, time to hang with the stuffy, pretentious Real Housewives of New York City.  Carole invited Aviva and the girls to lunch downtown.  They end up talking for an eternity about the perils of taking the subway.  They then move on to discussing Harry, the man most of them have screwed.  Never a good topic for Aviva who was at one point married to the player.

LuAnn decides to sit her daughter down to discuss the possibility of having a baby now, in her mid-40’s.   Seems like a ridiculous conversation that is totally staged for the cameras.

The girl’s are headed to a rooftop bar in the middle of the afternoon. Aviva discusses her phobias and talks about her gas mask and crisis supplies.  Her husband Reed is often a few steps behind her and she likes how comfortable presence makes her feel. He refers to it as a romantic evening with his wife and her three girlfriends.

Ramona sits down with Sonja because Sonja needs a bit of business advice. She trademarked “Sonja in the City” which is basically an event planning company. Ramona is coaching her on how to become a business woman step by step. Ramona thinks Sonja needs to focus on only one business at a time. Sonja also is working on making a toaster oven.

Sonja now moves onto Heather for business advice. Heather is much happier with helping to brand Sonja. She is pushing the importance of a logo and promises to hook her up with a good graphic artist. Heather also decides to plan a girl’s trip to London. Sonja is on board for the weekend, as is Carole.

Speaking of Carole, she decided to meet up with Ramona and Mario for dinner and the most exciting thing happening was the fact that Carole decided to drink a beer with her dinner. Seriously, I am beyond bored with these women.

I think in every episode someone ends up in a jewelry store. This time Aviva decides she needs to buy her husband Reed a wedding band. She’s hedging on going to London with the rest of the girls. Ramona thinks her clinginess towards her husband is weird at best.

Now we move onto the token party scene. This time Carole invited everyone to a jewelry designer’s party. The girls compare the number of wrinkles on their faces and who has the best dermatologist. They look bored to tears but are faking exciting. I’m bored to tears and not trying to fake anything. Ramona and LuAnn are in the same room together which means plenty of drama could easily start. Ramona points out that she simply says what everyone else thinks. Then they go to their separate corners and the typical backstabbing begins.

You’ll have to tune in next week to see just how the ill-fated girls weekend in London turns out!