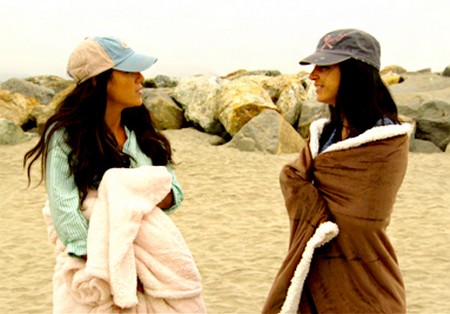 Tonight on Bravo is an all new episode of the Real Housewives of New Jersey called ‘Pack Your Baggage’. On tonight’s episode Teresa confronts Kathy over her “stolen recipe” accusations and sister-in-law Melissa attempts to show Teresa the error of her ways. . If you missed last week’s show called “Sit Down and Man Up” there is a full and detailed recap HERE for you!

The last time we saw our Housewives Jacqueline’s husband rallied the husbands of NJ before their trip to Napa, in hopes that drama will steer clear of his upcoming group trip. As everyone looked forward to the ‘good and peaceful times’ ahead in CA, Melissa did a photo shoot for the cover of her upcoming album. She kept it ‘all in the family’ while moaning in a photo-shoot with her youngest daughter by her side.

On tonight’s show as Hurricane Irene bears down on New Jersey, the Housewives flee to the sunny, golden coastlines of California. With their stilettos, fake tans, and dried sausage, they pile into cramped RVs for the road trip to end all road trips.

With tensions between Caroline, Jacqueline, and Teresa at an all-time high, it’s a constant struggle to keep the peace. Meanwhile, Teresa confronts Kathy over her “stolen recipe” accusations and sister-in-law Melissa attempts to show Teresa the error of her ways.

Tonight’s episode is going to be filled with the usual Housewife drama and you won’t want to miss it, so be sure to tune in for our live coverage of the show tonight at 10 PM EST! While you wait for our recap hit the comments and let us know what you think of “The Real Housewives of New Jersey” season 4 so far! Also we have a sneak peek video of tonight’s episode ‘Pack Your Baggage’ below!

Tonight’s recap: Finally, this week the girls are preparing for their RV trip through the Napa Valley. Hurricane Irene is coming which makes Teresa very nervous about leaving her girls behind. She’s also going crazy trying to figure out what to pack. She admits that basically, she doesn’t want to travel by RV and hiking isn’t her idea of a good time. So, Teresa not wanting to be trapped in an RV with Melissa and her brother Joe can only lead to problems for everyone.

The airports are shut down so everyone drives together in a caravan to Pittsburgh because it’s the closest point that they can fly out of. Teresa, Jacqueline and Caroline are all willing to at least try to get along as the trip begins.

In a startling move that will make Caroline lose her mind, Albie has suggested that his girlfriend, Lindsay, move in with him and the guys!

They finally arrive in California and decide they need to shop for camping equipment. Teresa is strutting around in blue fringe stilettos and comments on how stylish she is compared to everyone else. She also takes a shot at Kathy, who is riding a bike through the store. Teresa likens her to the wicked witch in the Wizard of Oz.

As everyone is traveling Albie is stewing, trying to find a good moment to drop the Lindsay bombshell in Caroline’s lap.  The guys seem to be working over time to make sure that the women get along and so far, it’s working. They arrive at the camp site, which ends up being a parking lot and this is where it’s going to get all kinds of ugly.  Teresa and Melissa decide to go and “meet the neighbors”.  They hop over to the next campsite and clearly have nothing in common with the women they encounter.

Teresa and Kathy have a chat over the situation with Jacqueline and Teresa uses this opportunity to take a shot at Kathy.  She feels that by Kathy trying to promote her own cooking skills it somehow puts down Teresa’s cookbooks.  I don’t see how those dots connect at all and neither does Kathy.

Day two of the trip starts and everyone seems to really be getting along.  They are working together and seem to be having fun in the RV.  Lots of playful interactions and mending fences.  Kathy decides to talk to Jacqueline and Caroline  about being open to a conversation with Teresa.  They say very little but listen.

In the next scene Teresa’s bashing Kathy to Melissa.  So much for hashing stuff out. It’s a shame that Kathy wrongly thinks that all is well between her and Teresa.  Melissa actually steps up to the plate and tells Teresa that if she has a problem with everyone, maybe the problem is her. It’s a ballsy move on Melissa’s part especially when you consider the fact that they are on the outs more often then not.   Teresa tries to explain how with each person the problem is (of course) the other person.  Melissa is glad that she felt like she could have this type of conversation with Teresa.  Count on there to be fallout, but we’ll have to wait until next week to see it.