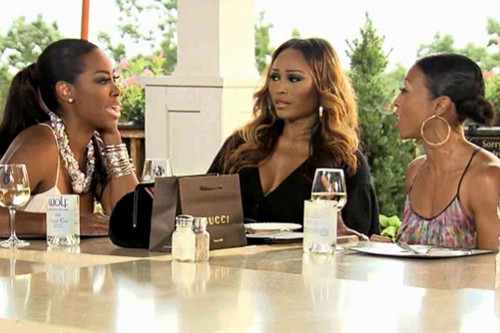 Tonight on Bravo THE REAL HOUSEWIVES OF ATLANTA continues and tonight’s episode is called, “Sour Grapes, Sour Peaches.” On tonight’s episode As the ladies enjoy a day trip to a local wine vineyard, things quickly turn from sweet to sour grapes.  Did you watch last week’s season 6 episode 11? We did and if you want to get caught up before tonight’s episode, you can read our full and detailed recap, right here.

On last week’s episode the ladies came together for Cynthia’s sister Malorie’s jewelry trunk show, but tensions flared between Kenya and Malorie. NeNe was hit with unexpected news and emotions reached a boiling point when one of the ladies made a dramatic exit.

On tonight’ show after their blowup at Cynthia’s trunk show, NeNe visits Porsha in her new home to begin working on their friendship. Meanwhile, Kandi finds the perfect venue for her musical, forcing Todd to make a decision about his potential new job. As the ladies enjoy a day trip to a local wine vineyard, things quickly turn from sweet to sour grapes.

Tonight’s episode is going to be another drama packed one, which you won’t want to miss. So be sure to tune in for our live coverage of Bravos’ The Real Housewives of Atlanta Season 6 episode 12 – tonight at 8PM EST! While you wait for our recap, hit the comments and let us know how excited you are about the new episode of RHOA tonight.

Cynthia and Peter are celebrating three years of marriage and where better to have date night than at Peter’s club. They chose to not invite any of their usual friends. Why bothering inviting drama although they did end up meeting with their friends Natalie and Christopher. Cynthia has known them for years and she really wants to introduce Natalie to the rest of the girls, but Natalie may know too much to be a great additon. She apparently met Kandi’s fiancée years ago when he was dating a friend of hers. Natalie described the situation as Todd( several years ago) having been an opportunist. An her husband corrabtes her story by saying Todd had gained something of a reputation in the day for using women.

Cynthia was concerned about what she was hearing and even Peter was a little bit thrown. Not that he let the revelation ruin his night. He invited Natalie and Christopher along for his anniversary because he wanted to make it special. Christopher is a former singer and he invited him to sing a ballad for the couple. The original song created just for them was cute and it did make Cynthia cry. So overall it was a great surprise for her.

Kandi also happens to be speaking about Todd. In her case she had to tell her team that he wasn’t going to be helping out with her musical. She really needed his help on this grand project when he decided to take a job overseas for 6 months. Kandi and her team are now worried about moving on by themselves. They’ve never handled such a large project and Kandi’s faith in them somehow making it work isn’t really calming them down.

Nene has gotten over being mad at Porsha. She managed to stop by the other woman’s house for quick chat. Surprisingly, Nene is the only one that didn’t have something to say (at least to her face) to Porsha moving into such a large home. Nene would rather talk about Porsha’s love life or lack thereof. She wants to know when Porsha will begin dating again and she learned it might be a while.

Kenya threw a family get together. She invited her aunts and her cousin and in-law together. It seems she wanted to establish family support and she’s going to be needing that from them seeing as she’s going through with her plan to have a baby. She hasn’t decided on who the father will be, but she’s already making appointments. Her family cautions her to think it over before she makes any decisions. They just want her to be sure she’s doing this for the right reasons.

Just when Kandi said she’s not afraid to do the whole play by herself; she ropes in Todd for help. All she had to do was look at a venue to see if it was right for her show, but no she simply had to get Todd’s opinion on the space. At one point he had to take a call for work and that made Kandi upset. She didn’t like his “little job” interfering. Eventually, after talking about needing his help and him suddenly no longer interested in the job he took on last week, Kandi convinced him to do the play with her.

The ladies have arranged a trip to the winery. They’re all supposed to be enjoying the relaxing journey and yet Cynthia tells everyone on her bus about what her friend, Natalie, had told her. Cynthia is not one to gossip so both Nene and Kenya were shocked to hear her go there.

The first sign of distress came when Kandi was asked if she was still interested in the winery being a venue for her upcoming marriage. Kandi said no she wasn’t because she and Todd had talked about eloping. They figured that would be easier. Some of the other women agreed including Natalie who said she and Christopher had eloped. Kenya interrupted her after that. She never heard Natalie and Christopher were married. As far as Kenya knows Natalie is only Christopher’s common law wife. Which Phaedra says Georgia state refuses to recognize anymore.

Natalie got back at Kenya. She got the girls all to agree that Kenya shouldn’t be making remarks on anyone’s marriage when she’s never been married. Kenya found that funny that she’s getting called out for exactly the same thing Natalie did when she started talking about Todd. So she brought the situation up.

Natalie was the one spreading someone else’s business and shouldn’t be mad when Kenya did it to her. Kandi and the rest of the women feel that way. That why Kandi says she’s never said anything about Peter when she’s heard stuff. Kandi said “let the drama end here” when how can it now that Cynthia and Peter will want to know what stories she’s talking about.