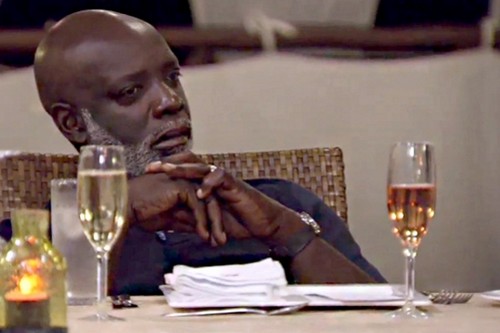 Tonight on Bravo THE REAL HOUSEWIVES OF ATLANTA continues and tonight’s episode is called, “He Said, She Said.”  On tonight’s episode Kenya thinks the ladies and their partners could do with some little rest and relaxation and organizes a trip to Mexico.  Did you watch last week’s season 6 episode 15? We did and if you want to get caught up before tonight’s episode, you can read our full and detailed recap, right here.

On last week’s episode still reeling from Peter and NeNe’s argument at Kenya’s masquerade ball, Cynthia was worried their conflict would have repercussions on her friendship with NeNe. With his surprise birthday party looming ahead, it was unclear if NeNe would be a no-show. Meanwhile, Kenya seeks answers from Marlo after NeNe’s over the top display at her charity event, and decides to confront NeNe about her actions. As Porsha prepared for her role in Kandi’s musical, NeNe offered her acting tips and also began to question Kenya and Marlo’s new friendship. Hoping to move on from all the recent drama, Kenya invites the girls to a couples trip “do-over” in Mexico. At Cynthia’s “Bailey Bowl” fitness event, the light-hearted day turned dark when Marlo and NeNe square doff in front of a packed crowd – leaving a confused Kenya caught in the middle of their shattered friendship.

On tonight’s episode With the Bailey Bowl fiasco behind them, Kenya thinks the ladies and their partners could do with some little rest and relaxation and organizes a trip to Mexico. However, not everyone is excited about the trip, as both NeNe and Phaedra voice their displeasure. Kenya checks in on her new good friend Marlo and learns the jaw dropping truth behind the Bailey Bowl drama with NeNe. Meanwhile, Porsha learns that Peter has his own tea to spill, leaving Cynthia caught in the middle and Porsha feeling tormented by her marital past.

Tonight’s episode is going to be another drama packed one, which you won’t want to miss. So be sure to tune in for our live coverage of Bravos’ The Real Housewives of Atlanta Season 6 episode 17 – tonight at 8PM EST! While you wait for our recap, hit the comments and let us know how excited you are about the new episode of RHOA tonight.

Bailey Bowl was a bust. Mostly due to Nene and the drama she knowingly brought to what should have been a fun day. But to her credit Cynthia doesn’t hold a grudge. So when the next time she saw Nene after all the drama; Cynthia tried to move past what happened. She and Nene went shopping for their upcoming Mexico trip which just happens to be a trip Kenya had planned for all the girls.

However Nene still has grudge against Kenya and Marlowe for that matter. She’s only going on the trip to enjoy some sun with a few of her friends and Greg. And to hell with the trip coordinator or one of her supposedly best friends.

Kenya on the other hand didn’t know how much Nene seems to hate her. It wasn’t until Marlowe came clean that Kenya even knew Nene was giving out ultimatums. Apparently Nene, Cynthia, and Marlowe were on a three way phone call when Nene started to make certain demands – she told Marlowe she couldn’t be friends with Kenya. Now Marlowe ignored because not only is she a grown woman but she thought Nene was overreacting.

Nene was overreacting then and she’s continuing to do so. According to her, Marlowe couldn’t be friends with both her and Kenya. So Marlowe’s refusal to comply meant she chose Kenya!

As for the trip, Phaedra wants to go but she isn’t too sure she should bring her husband along. Apollo and Kenya do have history. They were accused of overly flirting and recently Apollo lost his cool after a few too many drinks at Nene’s clumber party. Although Apollo doesn’t like that his wife has to consider if he’ going with her.

Apollo is very much a man’s man. He doesn’t like someone telling him what to do much less to hear it from his wife.  But Phaedra’s main problems aren’t with her husband – it’s with Kenya. She’s worried about what the other woman is going to try and pull while everyone is relaxed.

Regardless of what Kenya’s heard the trip to Mexico is going ahead. She’s a firm believer in “keep your friends close and your enemies closer”.  So she went on earlier to set everything up. By time the rest of the gang arrived, they were greeted by a mariachi band and Kenya dancing in a bikini and poncho. It was bit over the top though no one expected less from Kenya.

And all their rooms were nice minus the photo of herself Kenya put in all the rooms. Lawrence had warned her she was stirring up trouble with those and yet she went along putting them up anyway. Phaedra would have had something to say about that but she hadn’t flown with the rest of the group. She claims she lost her passport and missed her flight – neither Kenya nor Nene are buying that excuse.

On their way to Mexico, there was a minor a hiccup. Peter thought he should bring up a conversation he had with Kordell in front of everyone. The two met for lunch and of course discussed Porsha. After the divorce was announced like that, Peter and Cynthia took Porsha’s side. Then a couple of minutes with Kordell and now Peter suddenly believes in Kordell’s version of events. Like the fact Kordell really loved Porsha and only kept her name off of all their property because she wasn’t smart enough to handle responsibility.

Sure, Porsha isn’t the smartest tool in box but should her own husband put limitations on her. That’s the part Peter hasn’t gotten to on his own yet. All he’s thinking is that he should maybe listen to Porsha’s side so he knows how the marriage falls apart.

Porsha managed to divert the conversation then but she couldn’t escape their dinner later. Kenya thought it would be interesting to assign seating to everyone so that people could so that there wouldn’t be any coupling. That left Porsha near to Gregg.

Gregg wanted to offer up the newly single Porsha advice. He told her how he and Nene struggled to get back together after their own divorce. They were only able to do it though once they realized they both loved each other.

Gregg was just trying to be nice while Kenya and Peter wanted to stir up drama.  Porsha was telling everyone at dinner including Phaedra and Apollo (that were new to the vacation) that she signed on to help Kordell overcome what was in his past. Kenya says that Porsha was basically Kordell’s beard because that’s what it sounds like. And Peter feels like Porsha was implying the same.

The two of them don’t even want to hear Porsha explain her statement seeing as they keep on speaking over her. And when Kandi tries to help, then suddenly Kenya is ready to drop the subject. For now at least but give Kenya some time and she’ll be back on the subject in no time!