The Real Housewives of Atlanta RECAP 2/23/14: Season 6 Episode 16 “Twirling with the Enemy” 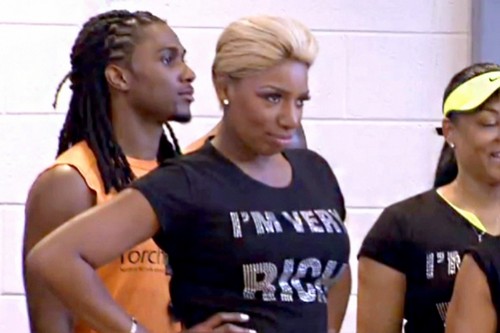 Tonight on Bravo THE REAL HOUSEWIVES OF ATLANTA continues and tonight’s episode is called, “Dwirling with the Enemy.”  On tonight’s episode at Cynthia’s “Bailey Bowl” fitness event, the light-hearted day turns dark when Marlo and NeNe square off.    Did you watch last week’s season 6 episode 15? We did and if you want to get caught up before tonight’s episode, you can read our full and detailed recap, right here.

On last week’s episode ready to move on from the pillow talk saga, Kenya planned a grand masquerade ball for charity. Porsha pinned her hopes for a future career as an actress on her make or break audition for Kandi’s musical. Mama Joyce’s meddling returned with a vengeance, forcing Kandi to face what may be the biggest challenge yet to her already fragile relationship with Todd.

On tonight’s episode Still reeling from Peter and NeNe’s argument at Kenya’s masquerade ball, Cynthia is worried their conflict will have repercussions on her friendship with NeNe. With his surprise birthday party looming ahead, it’s unclear if NeNe will be a no-show. Meanwhile, Kenya seeks answers from Marlo after NeNe’s over the top display at her charity event, and decides to confront NeNe about her actions. As Porsha prepares for her role in Kandi’s musical, NeNe offers her acting tips and also begins to question Kenya and Marlo’s new friendship. Hoping to move on from all the recent drama, Kenya invites the girls to a couples trip “do-over” in Mexico. At Cynthia’s “Bailey Bowl” fitness event, the light-hearted day turns dark when Marlo and NeNe square off in front of a packed crowd – leaving a confused Kenya caught in the middle of their shattered friendship.

Tonight’s episode is going to be another drama packed one, which you won’t want to miss. So be sure to tune in for our live coverage of Bravos’ The Real Housewives of Atlanta Season 6 episode 16 – tonight at 8PM EST! While you wait for our recap, hit the comments and let us know how excited you are about the new episode of RHOA tonight.

It’s the morning after and Nene is up to her old tricks. She tries to explain away her actions last night at the charity Masquerade and feels her loving husband will be the perfect sounding board. And though he doesn’t come out right out to tell her she was wrong, he does feel the charity should have been the main focus. Greg was actually one of the people that convinced her to attend the ball but still he’s willing to listen to her complaints. Like how she felt bullied into going and how her natural instincts kept warning her not to go.

And in the same discussion the couple are trying to figure out why Peter had an attitude (according to them) last night. Nene didn’t understand why Peter was getting into women’s business. She felt he overstep and misjudged. But what really got her going was that Cynthia did not even attempt to step in and defend her. Nene figured her friend would have tried to explain the situation at least and instead Cynthia left her husband reprimand Nene.

Cynthia didn’t say anything because she agreed with Peter on some level. She told Mal that Nene should have picked a different setting to have it out with Kenya. Doing it at a charity event just made everyone feel like she was in the wrong. And now Cynthia is throwing a surprise party for Peter and she doesn’t know whether Nene will come out to celebrate with them.

She hates putting herself between Peter and Nene. They’re both a big part of her life and she hopes Nene will come to the Jamaican themed party. Well, Marlo seems to think she’ll attend. Marlo met with Kenya earlier for drinks. They discussed the ball as well and Marlo feels that maybe she can help bridge a gap between Kenya and Nene. She’ll see what she can do at the party.

As for the party, there was a minor hiccup when Peter almost decided not to go to “dinner”. He wasn’t really feeling up to it and only by a slim chance chose to go. Fortunately, by time he arrived the party was underway and he truly got to enjoy it.

Nene did end up arriving and she greeted Peter a little bit coolly. She said “Happy Birthday” and then didn’t allow herself to be as excited as she normally would have. Nene wasn’t fully into giving Peter her precious forgiveness. And Kenya, who might have missed the awkward scene, saw her and felt now would be the best time to make amends. The original plan was to get Marlo to be an intermediary but she felt Nene would be more receptive if she didn’t get a chance to play it up for an audience.

Kenya spoke to her and even apologized for her party in the fight at the Couples’ Event Nene had thrown. She merely wants to put this all behind them so that they can move on and Nene agreed. Or better yet she pretended to agree by giving in to a hug Kenya asked for. Nene is still upset and finding out moments after making nice that her close friend Marlo has become besties with Kenya doesn’t help disposition.

Nene went over to Porsha’s house afterwards. Before when she wanted to rants he would use Cynthia but this time she went to Porsha’s. She supposedly went to help Porsha with her role in Kandi’s play and got caught up into talking about Peter’s party. She mentioned to Porsha that she never knew Marlo and Kenya had gotten that close although she should have suspected seeing as a girlfriend of hers once warned her that Marlo was an opportunist. Porsha however is wondering where Nene is going with this. She knows how close Nene was to Marlo and to go from BFF to opportunist is a bit of a stretch.

Cynthia is hosting another event. She’s gotten into fitness a lot lately and is throwing a Bailey Bowl. It’s an adult version of field day. All of her friends will have their own teams compete against each other. The whole event should be fun and if the women can keep the drama in check then it will be.

The only problem so far is that Nene invited all of her other bridesmaids to be on her team except for Marlo. So Marlo joined Kenya’s team. Later as the games are happening, Marlo tried to joke around with Nene when she abruptly found out that she’s on the outs with Nene. Apparently no one had given her the memo.

Kenya sees how upset Marlo is getting and tried to get Nene and her to talk. But when she approached Nene; the atmosphere went from tense to volatile in seconds. Nene started cursing and telling them to get away from her and the girls can’t fathom why. The last they checked everything was good between all of them.

Yet Marlo guessed pretty quickly why her friendship went sour. She confronted Nene over the other woman’s pettiness – Nene doesn’t want to be around her after she became Kenya’s friend. And Marlo only got this upset because she thought of Nene as older sister and good friend. She never would have imagined Nene could be that childish.

Why would Nene, who should have it all, drop a great friend out of jealousy? Whatever the reason it ruined fitness day and all the teams got disbanded and sent home.