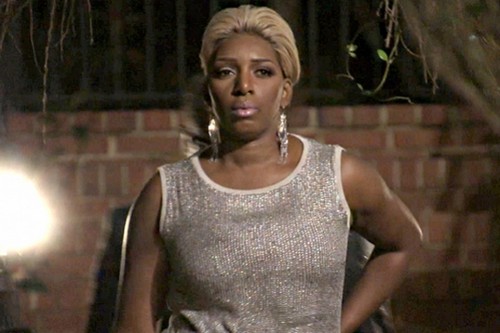 Tonight on Bravo THE REAL HOUSEWIVES OF ATLANTA continues and tonight’s episode is called, “Dropping the Ball.”  On tonight’s episode Kenya plans a grand masquerade ball for charity.    Did you watch last week’s season 6 episode 14? We did and if you want to get caught up before tonight’s episode, you can read our full and detailed recap, right here.

On last week’s episode NeNe’s fun couples night turned melee continued with Apollo showering his wrath on Kenya’s friend, Brandon and Kandi pouncing on Christopher Williams and his wife Natalie for her “hustler” allegations against Todd. Then, things quickly turned from bad to worse when Cynthia and Peter became embroiled in the situation causing Kandi to lash out in a shocking display. In the light of the next day, everyone tried to make sense of the drama with each person remembering a slightly different account of what actually happened. When Kandi arranged for all of the women to get together at a spa to smooth over their differences, NeNe’s anger towards Kenya exploded leaving the future of their friendship in jeopardy.

On tonight’s episode Ready to move on from the pillow talk saga, Kenya plans a grand masquerade ball for charity. Porsha pins her hopes for a future career as an actress on her make or break audition for Kandi’s musical. Mama Joyce’s meddling returns with a vengeance, forcing Kandi to face what may be the biggest challenge yet to her already fragile relationship with Todd.

Tonight’s episode is going to be another drama packed one, which you won’t want to miss. So be sure to tune in for our live coverage of Bravos’ The Real Housewives of Atlanta Season 6 episode 15 – tonight at 8PM EST! While you wait for our recap, hit the comments and let us know how excited you are about the new episode of RHOA tonight.

Kenya has pretty much calmed down from both the fight and the follow up Spa Day. At the time she was hurt that the whole fight was being blamed on her and she might have said things she didn’t mean back then. Now since Kenya has had time to think about it and conveniently ran into Marlo, Nene’s close friend, at Lawrence’s; she figured why not get advice on how to make it up to their mutual temperamental friend. Kenya shared her plan with the other woman.

Kenya was planning on throwing a masquerade ball for charity. It’s something she’s been working on and she had invited Nene to it. The charity she’s benefitting she happens to know is a close and personal favorite of Nene so she thinks the ball will be good ice breaker. Marlo agrees. They’re of the mindset of “How could anyone still hold a grudge while at benefit?”.

Kenya enlisted Marlo’s help along with Cynthia and Mal. One of the programs for her benefit will be a bachelor’s auction. Sadly, only six men showed up and half of them couldn’t get a woman to open her wallet on a good day. At least the whole day wasn’t a complete bust. Marlo and Kenya got to hang out and enjoy themselves. Probably too much by the way Cynthia is shocked by it. Cynthia hadn’t thought the two women had grown that close.

Kandi was casting for her recent play when Porsha decided to audition. And although Porsha has a fair deal of doubters she somehow managed to pull off a good performance. Prior to the audition, Kandi’s people were all thinking Porsha couldn’t accomplish the singing part seeing as they all made fun of her on the reunion show last time but she surprised them there. Her voice still needs some tuning however it is strong.

Porsha later learned she got the part when all the girls (minus Nene) went to the roller derby. Not only did she get a part but she got one of the leads. Kandi said she blew everyone away and that’s how she got the part. With the full cast picked and production coming along, Kandi finally thought she had everything under control. Then she heard what her mother has been doing. Mama Joyce had called up Carmen and threatened her. Carmen is te girl Mama Joyce believes to be messing around with Todd behind Kandi’s back but that’s not why she threatened the younger woman.

Carmen tried to get to the bottom of the rumors and that lead her to Joyce’s close friend. Mama Joyce called up Carmen and told her to stay away from her friend or she’ll get beat. This is what Carmen told Kandi and she also mentioned the other thing. It seems Joyce was willing to pay a guy off for getting pictures of Todd in a compromising position. Of course this comes as a surprise to Kandi. She believed her mother when Joyce said she wouldn’t intervene.

Todd was upset when he heard and he told how it might make him leave one day. No man wants to get pushed out by his mother-in-law. He told her it was about time she set boundaries with Mama Joyce. He and Carmen will not be able to continue to be around her with Joyce the way she is.

While the ladies were skating earlier they appeared to enjoy themselves and they also let go of any remaining problems from the fight. They even laughed at some of their antics at the sleepover. Yet no one knows what’s going on with Nene. She was invited too to the Derby and chose not to come to. Cynthia caught up with her wanting to talk and then had to deal with Nene being upset. Apparently Kenya forgot to invite Nene to the benefit dinner held in her honor.

Nene said she never anything about this ball until Marlo mentioned it. And she’s refusing to go until she gets personally invited by Kenya. When Kenya heard what was going on she got upset. She had sent out the same invite to all the girls and only Nene is claiming she never got it. But she refuses to make that call. Kenya isn’t going to beg her to show up which leaves Cynthia being the one to beg.

Cynthia called Nene so many times that she was able to wear Nene down. Nene came to the masquerade and then promptly made a fool out of herself. She snubbed Kenya like she didn’t know her and when she was asked to give a few words towards the charity; she chose to be catty. She made a brief speech which was rude and made several guest feel uncomfortable. Including Peter. Peter wanted to leave right afterwards.

Nene, Greg, Cynthia, and Mal followed Peter out. They didn’t know why Peter was leaving and wanted to leave with him. So imagine Nene when she learned that Peter blamed her for making the night feel that way. He said she went too far with her speech and Nene doesn’t believe that she did. She was trying to blame the whole night on Kenya when Peter call it quits. He knows better than to try and fight with her. No one can out talk Nene.