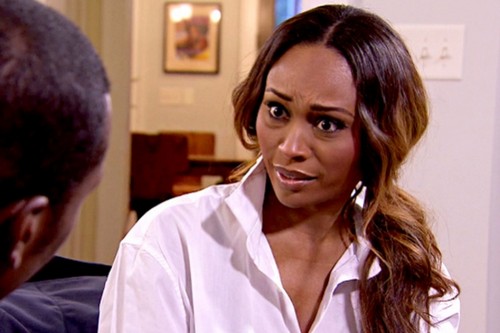 Tonight on Bravo THE REAL HOUSEWIVES OF ATLANTA continues and tonight’s episode is called, “The Old Lady and the Shoe.” On tonight’s episode While trying on wedding dresses with her family all hell breaks loose, and Kandi sees her wedding dream turning into a nightmare.  Did you watch last week’s season 6 episode 4? We did and if you want to get caught up before tonight’s episode, you can read our full and detailed recap, right here.

On last week’s episode Phaedra headed to Alabama to study for her upcoming mortuary exam, and Apollo turned to Peter for advice on how to handle their marital issues. Meanwhile, Porsha’s sister Lauren pressured her to look for her own apartment, and then the tension between Mama Joyce and Todd finally cames to a head.

On tonight’s episode after a few days away in Alabama, Phaedra returns home still upset with Apollo for refusing to admit his part in inappropriately texting Kenya. Meanwhile, with no man in sight, Kenya hears her biological clock ticking and realizes that if she ever wants to have a baby, she’ll have to re-examine her priorities and make some hard decisions about her future. Cynthia and Leon have the inevitable “sex talk” about Noelle and her very first boyfriend. While visiting a new friend, NeNe digs up some juicy dirt on both Phaedra and Kandi’s past intimate affairs. With her divorce still in process, the stress catches up to Porsha and ends up sending her to the hospital. Now that Momma Joyce seems willing to work on her relationship with Todd, Kandi begins planning her fairytale wedding, but she still can’t escape the rumors that Todd is having an affair with her best friend, Carmon. While trying on wedding dresses with her family, all hell breaks loose, and Kandi sees her wedding dream turning into a nightmare.

Tonight’s episode is going to be another drama packed one, which you won’t want to miss. So be sure to tune in for our live coverage of Bravos’ The Real Housewives of Atlanta Season 6 episode 6 – tonight at 8PM EST! While you wait for our recap, hit the comments and let us know how excited you are about the new episode of RHOA tonight.

Kandi keeps having her problems crop up with her mother. Although the older woman agrees to try and see the good in Todd she knew she left offseeing the good in Carmen. Carmen is Kandi’s friend that Mama Joyce believes is sneaking around with Todd behind Kandi’s back. Joyce used to like Carmen but after Carmen was hired (she was a friend first) by Kandi; the mother said the friend was using Kandi. Kandi feels like her mom doesn’t want her to get close to anyone besides her and she has these people Joyce doesn’t like whispering in her to ear to take a stand. She has to lay down the law with her mom.

Nene and Greg went to visit an old friend of Nene’s from way back in high school. The man is happily married and enjoying his retirement when Nene begins to ask uncomfortable questions. She figured she should ask if he messed around with Kandi. In the past he admitted to dating her but in front of his wife Kandi got downgraded to one-hit wonder. Nene continues with her questions by then asking him if her hooked up with Phaedra. Phaedra went to high school with them as well. Back then she had a reputation. She was called the “Head doctor”. The friend claimed he never had anything to do with Phaedra former technique.

Phaedra is now licensed to embalm in Alabama. This means she doesn’t have to run back and forth. She can take the time to relax if it were not for Apollo. They haven’t been on good speaking term recently. Just as there argument was stretching out, Apollo came to senses and talked to his wife. Not telling her to drop it but instead apologize for the texting situation.

Later on, Kandi organized a dance work out for all the girls. The only person unable to make it was Porsha. She was only recently released from fainting and injuring herself. Otherwise everyone else remains in a good mood. Nene sees this and believes it’s the best time to announce her plans. She wants to stage another bus trip with both Phaedra and Kenya included. Their last road trip was simply horrible though she won’t let that stop her from bringing all the girls together again.

A trip to Savannah would be relaxing. Once Porsha was back on her feet she was sold on the idea of another road trip. While out wither sister they were joking around. They saw a blood pressure machine at the pharmacy and Porsha took her’s. It says she’s at risk of hypertension. Maybe she should have did this before she agreed to a road trip.

Cynthia had to speak to Noelle’s Father, Leon, about their daughter. The boyfriend thing is still new and they need to discuss who will be giving the sex talk. Leon wants to do it. He’s very involved with his daughter and he wants to make sure she’ll be ok.

Kenya wants children of her own to worry about. Her problem with getting them is that she thinks she needs a man and marriage first. Her aunt whom she’s very close to tells her that maybe she shouldn’t let anyone stand in the way of her dream.

It’s Kandi’s dress fitting. She invited both Carmen and her mother. Before Joyce arrives Carmen was bad mouthing her. Joyce arrives and tries to be pleasant. She doesn’t like Todd but the worst she says about him is that she wants Kandi to marry someone else. She says Carmen knows him so she should understand and Carmen begins to run her mouth. She provokes Joyce with full knowledge of how hotheaded Kandi’s mother is. An argument ensues and Kandi comes out. She’s no longer excited trying out dresses. She wants to quit. Carmen was driven out by her mom and aunts to an outer room; so Kandi wants to quit. She doesn’t like confrontation.

In order to ease the atmosphere, Kandi tries on one more dress. When she comes out her aunts decided to tell her that they don’t condone the engagement either. Kandi has had enough. She goes out to join Carmen and they begin talking. Carmen says she has to make choice. She has to be hard with her mother.