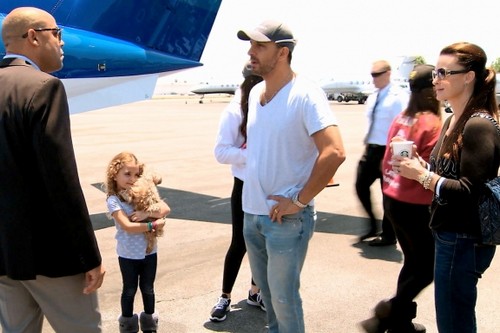 The Real Housewives of Beverly Hills returns to Bravo tonight with all new November 25th,season 5 episode 2 called, “Who Stalked J.R.?,” and we have your weekly recap below.  Tonight, Brandi Glanville moves into her new house with help from Kim Richards and sightly movers. Meanwhile, Kyle Richards and her family land in Lake Tahoe; Yolanda H. Foster serves up a special dinner; Kim and Brandi go undercover to spy on Brandi’s former boyfriend.

On the last episode, in the season 5 premiere, after a sudden and secret departure from Puerto Rico at the end of last season, Lisa Vanderpump was still wary of her formerly close friends, but was beginning to reconnect with Yolanda and Kyle. She had no interest in making amends with Brandi, who was also struggling to move past her own hurt. The ladies came face-to-face at Kyle’s annual White Party and the over-the-top event was bigger and better than ever now that Mauricio’s real estate agency was selling houses upwards of $50 million. The social event of the season brought original Beverly Hills housewives Adrienne Maloof, Camille Grammer, and Taylor Armstrong back together. As unresolved issues came to the surface, Brandi was faced with making amends with both Lisa and Adrienne at the same event. Did you watch the last episode?  If you missed it we have a full and detailed recap right here for you.

On tonight’s episode s per the Bravo synopsis, “Kim and some hunky movers help Brandi move into her new house, but Brandi is more interested in the guys’ abs than unpacking boxes.  Kyle and her family jet to Lake Tahoe in a private plane while Yolanda surprises David with a very special, and very revealing, dinner. Kim and Brandi celebrate being BFFs by dressing up in disguise to spy on Brandi’s ex-boyfriend, J.R.”

Tonight’s episode of Real Housewives of Beverly Hills kicks off at Brandi Glanville’s house, Kim Richards pays her a visit to help her with moving.  Brandi fills her in on her chat with Adrienne at Kyle’s black and white party.  Brandi explains that she just wanted to clear the air.  Kim is impressed with how much Brandi has grown and matured over the past year.  Brandi and her friends flirt with the movers and even pay them to show them their abs.  Brandi’s relationship with JR is complicated – and she has no problem openly flirting with other men.  Kyle is sure she can help Brandi get over JR is no time.

At Lisa’s house, her shirt designer Claire arrives.  All of Lisa Vanderpump’s shirts are tailor made by a shop – and the designer comes to her house to exclusively work on the designs with her.  Meanwhile, at Kyle’s house she and her husband are getting ready to fly on a private plane to Lake Tahoe.  They gossip about the party and Kyle says that she could tell that Brandi felt uncomfortable and was hiding the whole night.

Kyle and her husband pack their daughters in to the car and hit the road.  She laughs that when they first got married they didn’t have any money, so she used to make her kids pretend to be 2 even though they were 4 so she didn’t have to pay for them.  Kyle is so happy that now she and Mauricio have their own plane.

Lisa Rhinna meets up with her agent Nick for lunch.  She recently started working with Nick, but she considers him a “hustler” and hired him because he is young and working “day and f—king night.”  He reveals to her that they are making the horror movie Scream in to a TV show, and he gives her a copy of the script to see if she is interested in auditioning for any of the characters.  After going over a stack of scripts she tells Nick to schedule a meeting for all of them, because she’ll do anything to make a buck, like her embarrassing Depends commercial in 2012.

Lisa heads to Michael Beaudry’s jewelry store with Shiva, Lisa’s friend Mohamed’s girlfriend.  Lisa likes spending time with Shiva because she doesn’t have to try as hard as she does with the other girls, and Shiva gets Lisa’s sense of humor and doesn’t read too far into things that she says.  At the jewelry sore Lisa falls in love with a pink sapphire ring – but the jeweler reveals it’s worth as much as a 2014 Rolls Royce (which values over $200,000).
At Yolanda’s house she surprises her husband David in lingerie – and she has been cooking his favorite dinner.  They fix their plates and head upstairs and have dinner and wine out on the balcony.  While they eat David reminisces about when they first started dating and she wore red lingerie to a bar with him and had nothing else on but an overcoat.  Yolanda has been trying to plan a Wednesday night date night forever, but David’s schedule is always busy and he is always working.

Brandi heads over to Kim’s house, she confesses to her that she hooked up with one of the young cute movers that were at her house named Jake Ryan.

She insists that they didn’t have sex, they just slept in the same bed together and he gave her hickies.  Kim is a little grossed out because she has a daughter who is 23 and as far as she is concerned 23 year olds are children.  Brandi says she wants to get over JR, because she knows that he is sleeping with another woman.  Kim decides they are going to stalk JR and catch him with the other woman – and once Brandi sees him cheating on her she will be able to move on.
Kim and Brandi get decked out in wigs and hats and scarves and head to a restaurant where they think JR might take his other girlfriend.  They try to hide in the bushes, but Brandi is afraid of rodents – so they slip behind a curtain instead.  They finally see JR leaving the restaurant – but their mission is unsuccessful because he is alone and not even with the other girl that he is sleeping with.

At Yolanda’s house she is getting ready to ride horses again for the first time since she was sick.  But, since she got healthier – she can barely do up her riding pants.  She wines to her house keeper who reminds her that she is better off gaining a few pounds than being sick again.  Kim meets up with Kyle to go riding with her.  Despite all of the drama that they have gone through together, Yolanda has always had a soft spot for Kim and wants to look after her.  They hit the trails on their horses, and discuss their kids going away to college.

It’s time for Brandi’s big meeting with Adrienne, and she is feeling extremely nervous.  They arrive at the restaurant and take their seats.  Brandi explains that they don’t need to be best friends and she knows they won’t be braiding each other’s hair anytime soon – but she wants them to move forward.  Brandi apologizes for the things she said to Adrienne, and any trouble it caused her family.  Adrienne insists that she doesn’t hate Brandi – but she does think that she needs to think before she speaks.  Adrienne doesn’t hold a grudge against her, and she can tell that her apology is heartfelt, and she is glad that they have brought each other some closure.