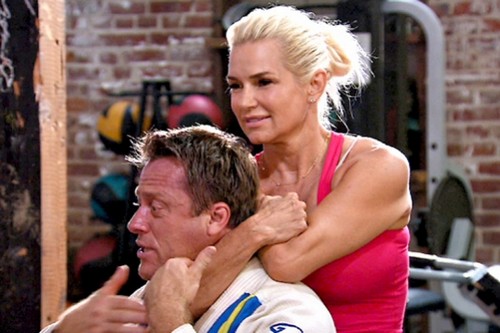 THE REAL HOUSEWIVES OF BEVERLY HILLS returns to Bravo tonight for a whole new episode called, “Tough Break” On tonight’s show Brandi takes Yolanda to Sacramento as she tries to reconnect with her father.  .  Did you watch last week’s episode?  We did and we recapped it right here for you.

On last week’s show Kim threw a luau for her daughter Kimberly who would be leaving for college at the end of the summer. Carlton, who was “over-served” before attending a pole dancing class with Brandi, arrived tipsy, while Brandi showed up nauseous. Later, Joyce and Brandi attempted to discuss their problems in a civil manner – with mixed results.

On tonight’s show Brandi takes Yolanda to her hometown of Sacramento, where she’ll be reading from her book. Brandi is more concerned, however, with seeing her father, from whom she’s been estranged for months.

Brandi couldn’t have made it even if she tried. She’s going back home to visit her dad for his birthday. She and him have been in awkward position lately. He used to be able to understand her wildness, but as he’s gotten older he’s grown more conservative.  Which lead to him having a problem with her clothes and the things she published in her book.

He doesn’t even know that Brandi is coming for his birthday. It’s supposed to be a surprise. And Brandi also happens to be bringing someone with her. A friend and not a guy. Brandi needed Yolanda to go with her for moral support. She didn’t want to take Lisa because she finds Yolanda more down to earth. Plus she and Lisa have had a few problems. She doesn’t like it when Lisa tries to mother her. She has a mom and that poor woman is currently stuck between her husband and her daughter.

Yolanda and Brandi arrived in Sacramento where Brandi got to play tour guide. They even got to enjoy themselves at their beautiful hotel. That is until they learned Arnold Swarchenegger stayed in the hotel room. They would need to black light the place before they can sleep in it.

Joyce and her husband are out at a gun range. They need to practice so that they know how to use their gun. Recently a couple of armed burglars came close to breaking into their house. Michael was able to spot them and tell their dog to attack, but they still want to know how to defend themselves. After a while and some minor missteps (such as aiming an armed gun accidentally at the instructor) Joyce proved to be a natural.

Along with her dad’s Birthday, Brandi is also going to an event for her book. She’s a little nervous seeing as her family will be there. The fact her father was willing to show up is huge concession on his part and she’s afraid of what she’ll say that will ruin it. Later on when it’s a family celebration, Brandi has to sometimes stop herself short. She claims she has a foot in mouth gene.

Yolanda turns out to have been a real asset. She helps ease the dad into forgiving Brandi and then provides a moment for father and daughter to be alone. Brandi has been going off the rails for a while. Not having her father in her life had help to contribute to that.

Kyle and her family are celebrating Shabbat. Kyle has really gotten into the spirit of it and has slowly been learning how to cook the meal. Sure, she converted for her husband, but she always was fascinated by the religion and the family values she got witness from watching her friends. Sadly her own kids don’t necessarily see the same thing she does. It’s all about expensive Bat Mitzvahs to them.

Joyce doesn’t always want to rely on her gun. She sent up a defense class for all the ladies. Many of the women want to learn how to defend themselves although Kyle doesn’t feel these women should know how to choke someone into unconsciousness. When Yolanda was practicing with the instructor she forgot what meant the safety signal was. The other girls had to warn her she had to let go or else.

Everyone got to laugh and learn some much needed maneuvers at the class. Lisa now knows if she’s wearing nothing more than a sports bar it can send her attacker into a daze. And if the girls were ever curious about who would win in a fight between Kim and Kyle then they learned the women will nearly kill each other in the process.

Brandi injured her hand in the class. She tried to hit a face and end up hitting a head. Her hand was swollen and Kyle decided to give her the card she was carrying earlier than she planned. Kyle said she knew how bad things have been for Brandi lately. Kyle also knew Lisa wouldn’t have liked getting left out. As Brandi points out, the other two women are very competitive with each other. They may deny it, but she sees it every time all three of them are together.