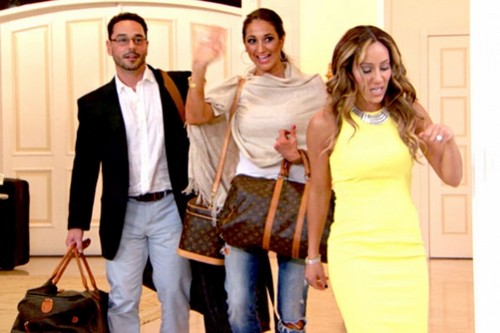 Tonight on Bravo The Real Housewives of New Jersey starring Teresa Giudice and the rest of the housewives return with an all new Sunday September 28, Season 6 episode 11 called, “Gaters and Haters.” On tonight’s episode the trip to Florida continues as the brewing tension between Jim, Bobby, and Dina comes to a head

On last week’s episode “Fugetabout” the Jersey snow as Dina, Melissa, and the twins traveled to the Sunshine State for a little bonding time. It was all in good fun until a nasty secret Dina held about the twins’ family threatened to derail the trip. Meanwhile, back in Jersey, Amber awaited news about whether her cancer had returned, and Teresa faced the new realities of her financial situation. Plus, Jacqueline returned and attempted to confront Teresa about her past. Did you watch the last episode? If you missed it, we have a full and detailed recap right here for you.

On tonight’s episode the trip to Florida continues as the brewing tension between Jim, Bobby, and Dina comes to a head. Meanwhile in New Jersey, Teresa struggles with how to respond to Jacqueline’s texts, and Rosie’s love life hits rocky waters.

Joe tells Teresa he got a text from Chris trying to reconnect as friends.

Teresa mentions how Jacqueline has been texting her as well. She gets emotional reading a text about how she is always here for her and still cares about her. When Joe asks if they should get together with their old friends with a glass of wine, Teresa responds “We made up, everything’s good, but I’m always gonna doubt her.” She is still dwelling on Jacqueline’s past betrayal and can’t fully forgive her.  “I think once the trust is broken, it’s hard to go back… how do I know she would never betray me again?”

For her part, Jacqueline breaks down in tears talking about how she can’t say that Teresa has been there for her throughout her life, an example being her struggles with her son, but she was still like a sister to her and so she can’t hate her.

Amber is excited about the Florida trip, seeing it as “a perfect way to celebrate being cancer free.”  She and Jim discuss the upcoming trip. She says she is going to have no input on the drama, hoping to prevent any heat coming on herself and knowing she is not in a position with the girls to be starting anything. She thinks the trip will be a bonding experience and a nice trip, though.

Kathy and Rich continue to work on their house together, which is bringing them closer. Kevin Jonas is a contractor on the project, to much amusement.

The twins, Dina, Teresa and Nicole have fun in Boca Raton. They visit Nicole’s boyfriend, Bobby. Teresa says, “he is putting on a show for my sister” and she definitely doesn’t think it’s cute.

The tension between Jim and Bobby is still strong.  Melissa talks to Bobby about it, hoping he will agree to bury the hatchet, but instead Bobby says he plans to “stay as far away as possible.” Amber reminds him that they had been friends for so long, and Bobby just says there’s nothing he can do about it.

Rosie tells her family that she and Ellen are no longer together. She doesn’t want to go back in the closet, and she needs to find the person she’ll spend the rest of her life with.

Dina and Amber talk about the tension between her and Teresa. Dina tells her that people now know some details about it. Amber acknowledges that she has learned her lesson and put the past behind her, relieving Dina.

Jim defends Nicole to Bobby in a clear attempt to bother him, during a conversation about relationships. Bobby storms off and Nicole follows him. He calls her stupid for playing into the argument with her friends. Jim is unfazed when Bobby locks himself in the bathroom, and says “[he] needs to grow up,” but that he still respects him and he is a good man. “And when I say he needs to grow up, he needs, for the first time to realize that he needs you,” he says to Nicole. He talks about Bobby not spending enough time with his kids or other commitments, either. He says “I’m not gonna divulge what Bobby told me about your family,” but Nicole doesn’t believe Bobby really told him anything. He continues, “you don’t wanna know what Bobby told me about your family. You don’t.”

Frustrated by their previous discussion being thrown out of the window by his actions, Amber flips out on him, runs off and starts sobbing. Nicole and Jim are still in the living room talking about Bobby. She is extremely offended at his claims that Bobby told him anything about her family, especially when he is not in the room to defend himself. She then also runs off and starts sobbing. Now, Nicole’s twin is out for blood. She goes to Jim and starts yelling at him, and which point he drops the bomb that Bobby has been cheating on her sister in his condo the whole time they have been dating. Amber is in the bathroom crying talking to Bobby when Nicole comes in, igniting another argument. When Nicole tells Bobby what Jim has been saying, Bobby finally emerges from the bathroom, wanting to talk about it immediately. The episode ends with everyone screaming at one another at the top of their lungs.