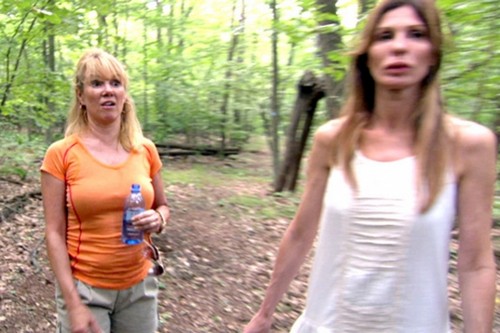 The Real Housewives of New York have returned to Bravo with a bang for season 6 and tonight’s new episode is called “Bon Voyage Ramona”. When Aviva scores a book deal for her memoir, she decides to meet with Carole, the renowned author of the group, for help.

On last weekend’s episode Heather invited all the ladies, except Aviva, to her vacation house in the Berkshires for the weekend. Things got dangerously out of hand when a placid canoe trip turned into a blood bath, with Kristen and Ramona going head-to-head.

On tonight’s episode Heather attempts to calm the quarreling Kristen and Ramona with a dinner fit for a King. The next morning, the women are hiking in the woods when Ramona stumbles upon something that brings out her worst childhood horrors, causing her to flee the Berkshires. Then, the ladies enjoy a relaxing afternoon of sunbathing, swimming, and hitting on young men before a final dinner out where they devise a plan to give Ramona her “just desserts” for abandoning them under suspicious circumstances.

Heather hosts a dinner to try to stop the bickering between Kristen and Ramona; Ramona flees the Berkshires after stumbling across something troubling while hiking; the ladies enjoy a relaxing afternoon.

Tonight’s episode begins back at the lake where we left off last week. LuAnn is tending to Kristen’s lip after it was the target of Ramona’s wine glass. Kristen now regrets standing up for Ramona when she was called “white trash,” and she is not taking any more from her frenemy.

Back at the house, Ramona and Sonja are talking about Kristen and Sonja tries to give her some suggestions for dealing with her nemesis. Sonja believes Kristen is an instigator. Sonja gets very emotional as she pushes Ramona to stop comparing herself to her abusive father.

LuAnn tells Kristen that Ramona goes from zero to sixty and that is just who she is when Kristen questions what the deal is with her, She presses LuAnn for details on why Ramona is so particular about her hair. Later, heather tries to make peace between the two sides so that they can all enjoy a nice dinner together.

Shortly after, Ramona comes over and gives a half-ass apology to Kristen. Kristen pushes her on her weak apology and Ramona blows up and it turns into a full-blown major argument. Kristen just cannot get over the fact that Ramona is so crazy over her hair but Ramona is clear that she went ballistic because Kristen threw water at her hair. She finally just gives up and they go separate ways in the house. Heather and Kristen talk about Ramona’s apology and Heather finally comes out and tells the gang to get along for the dinner. Ramona fills her wine glass and tries to give another apology to Kristen, this time a little more heartfelt. Kristen says she cannot accept her apology just yet. The tension is broken when Heather’s surprise comes…Elvis is in the house. Kristen seems actually hot for the impersonator and the two go running off into the night.

Later, Ramona secretly makes a call to friend Adam to pick her up with his plane because she feels she cannot tolerate any more of this girls weekend. Heather seems to think all the tension is gone, but she isn’t yet aware of Ramona’s phone call. At breakfast, Ramona is rushing everyone to get started on their hike and everyone wonders why she’s in such a rush. We find out a few minutes into the hike where Ramona carefully brings up her childhood and the bad memories of the woods. This will be her escape plan so that she won’t be made to look too bad because she is leaving under circumstances—from what it seems—are beyond her control.

She brings on the waterworks and starts freaking Carol out when she talks about her childhood. Ramona then finishes her plan off by telling Heather she needs to leave right away because of the bad childhood memories, but Carol spots how organized this whole thing is playing out and thinks she’s been played. Later, the women all talk about Ramona and her reason for leaving. Sonja defends Ramona and gets on Kristen for intentionally doing something to provoke Ramona. Ramona, meanwhile, gets dropped off to her waiting plane and off she goes into the sun.

When Carol gets back to the house, the ladies ask how she left. Carol tells them about the plane and Sonja cannot believe her BFF left without saying goodbye to her. The ladies don’t worry about it too long and head out to the lake for some fun. The ladies are given a young captain for their boat and Sonja is flirting big time. She is pretty drunk and making it very obvious what she wanted…even telling him she wants to stay with him for the night and promising she’d take him to heaven. She even asks the poor guy, who seems very uninterested, if he is on Christian Mingle. Kristen gets the details on the things Ramona had said about her and she cannot believe all the hate that came from her. As her and Carol talk about it, they basically chalk it up to jealousy.

The ladies head out to a nice restaurant and have some fun girl-talk until LuAnn gets a text from a friend who spots Ramona at a party in the Hamptons. Sonja doesn’t want to believe her girl would lie to her and had this whole plan set before they left so that she could attend the party. All the ladies try to convince Sonja that Ramona is playing games with her, but she is not believing it. They are getting more upset about the fact that Ramona is lying to them and stooped so low that she would lie to get out of spending time with them. If Sonja still had faith in her friend, it went out the window when she saw pics of Ramona at the party having a blast. Sonja is clearly upset. The ladies hatch a plan for Ramona after LuAnn recommends an intervention for Ramona. Next week is going to include the explosive confrontation with Ramona so stay tuned!