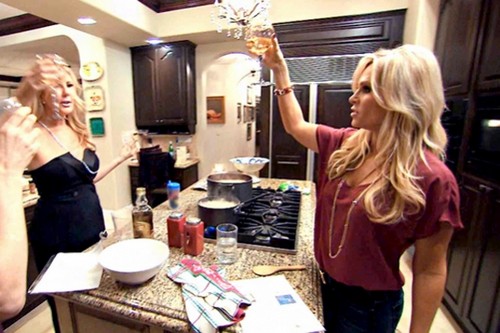 On last week’s episode The Hawaii trip concluded with the ladies questioned Vicki about the status of her relationship with Brooks and one last attempt to get “Fancy Pants” Dubrow to put on her party pants. Back on the mainland, Heather introduced the ladies to her future neighbor Shannon Beador when Tamra invited the women over for a spooky-themed night of food and tarot card readings. At a dinner, Tamra revealed that she misses her kids and is thinking about having a baby with Eddie. After meeting the ladies, Shannon invited them to her house for a “real” home cooked meal.  Did you watch last week’s episode?  If you missed it we have a full and detailed recap, right here for you enjoyment.

On tonight’s episode The dinner party continues at Shannon’s OC home, and while the ladies hop onboard the fun bus, Heather seems to have been left at the station. As Heather leaves town for the holidays, the ladies meet for a “Fakes-giving” Feast where they air out their grievances

The dinner got off to a rocky start. Shannon was caught several times nitpicking at her poor husband. Otherwise the dinner was fun and something new. The ladies all enjoyed the fact that Shannon cooked her own dinner instead hiring out like say some other people **hint** Heather**hint** would do.

It’s almost like Shannon is the anti-Heather. Her house is on the same grand scale, but Shannon isn’t as uptight at Heather has been known to be. And that’s why Vicki and Tamra are enjoying their time with her.

They loved playing on Shannon’s basketball court and they especially loved the fact that Shannon isn’t afraid to do shots. Heather on the other hand still remains uncooperative with letting her hair down. She isn’t joining in and when she sees Tamra drinking – she started to make snide remarks of her own.

Tamra was making a joke about the morning after pill when Heather said she wouldn’t need it because her tubes were tied. Tamra didn’t know why Heather went there and so she started to talk to the other women about this new problem. She told them that sometimes Heather can be unbearable.

She claimed that Heather never relaxes and then made a joke about the stick up her ass. How was she supposed to know that Heather was listening on their whole conversation? It’s not something an adult is generally known for.

But that doesn’t explain why Heather felt the need to go to Eddie and talk to him about his wife. Heather took a personal conversation between herself and Tamra then laid it all out for Tamra’s husband. She mentioned the children’s issue and how Tamra might want kids for all the wrong reasons.

Eddie was upset by their conversation. He felt that wasn’t any of Heather’s business and so he told his wife not to spill personal things about their marriage to her friends. Tamra agreed, but she was hurt by Heather’s actions

By the next day, Tamra and Vicki sat down to discuss their new friendship with Shannon. They love Shannon and there is no doubt about that, yet looking at her marriage from an outsider’s point of view has reminded them of their own failed marriages. So they know where Shannon is coming from when she bitches at David though they still feel sorry for him.

They want to help and yet they’re too new. So they’re stuck watching a marriage implode in way they’ve seen before.

As for Shannon, she knows that she’s harsh on her husband. Only she feels like David doesn’t show her the love she wants so she punishes him by being a bitch. Now is that going to change at the Fake Thanksgiving the girls are throwing – probably not, but people can hope.

Vicki and Tamara are holding a Fake Thanksgiving. Vicki wanted both her daughter and Brooks to be there however that’s never going to happen. Brianna refuses to accept her mother’s relationship with a guy she feels is an abuser. And because she’s not going to give her approval then Vicki has accepted that she has to deal with each relationship separately.

Brianna went with her husband to a Marines’ Ball and she missed out on the Fake Thanksgiving anyway. So Vicki was cooking dinner as well as watching her grandson that night when the ladies began to arrive early. Vicki soon started to direct them around the kitchen. She needed the extra help (what with baby Troy) and Shannon didn’t mind it at all. She likes having the added pressure of hosting off.

The pressure came back when her husband arrived yet for the most part she refrained from putting him down. And the dinner was all the better for it. Everyone enjoyed themselves and they were hitting the bottles kind of hard.

The only thing missing was Heather. Neither Tamra nor Vicki has spoken to her since they saw her at Shannon’s house. It sometimes feels like Heather has to show her superiority over then and that’s why they’ve felt a gap growing between them and Heather. But they don’t want to ruin their friendship. Despite their many complaints – Heather is still a really good friend.

So Tamra met with Heather after the holidays for lunch. She wanted to repair whatever was wrong. Though she hadn’t counted on Heather telling her sometimes she feels dismissed. If anything that’s how Vicki and Tamra feel when Heather cuts them off.

Although Heather isn’t taking the criticism well. She’s very defensive and Tamra has to calm her down. Tamra tell her that she doesn’t want to throw away their friendship and that’s why she came to the lunch. She believes her relationship with Heather is worth fighting for. And Heather wants to keep this friendship as well.

Their talk didn’t solve anything, but they somehow still walked away as friends.