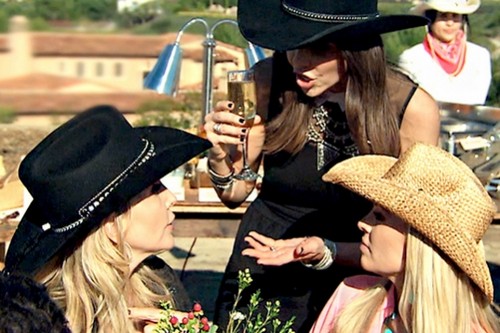 The Real Housewives of Orange County returns to Bravo tonight. On tonight’s episode called, “Showdown at Hoedown”, tension simmers between Heather and Shannon in the wake of their dispute over seating at a dinner. Elsewhere, Vicki struggles with her daughter’s decision to move; and Heather throws a hoedown bash, where a mechanical-bull mishap creates drama.

On last week’s episode Shannon and Vicki bonded when Shannon took Vicki to her holistic healer and brought her Feng Shui expert to her office. While Heather was busy planning a hoedown themed party to celebrate breaking ground on her new house, Lizzie was overwhelmed at home and Tamra pushed for her reluctant son Ryan to take on more responsibility at the fitness studio. A holiday outing turned tense when Vicki and Lizzie didn’t get along, and Heather and Shannon fought over, of all things, a chair.  Did you watch last week’s episode?  If you missed it we have a full and detailed recap, right here for you.

On tonight’s episode Vicki continues to struggle with her daughter’s decision to move to Oklahoma as Briana asks her to come along on a house-hunting trip. Heather hosts her closest friends and family for a hoedown-themed breaking ground party for their new house.

Everyone wants to move on from the “incident” from last week. What had occurred between Vicki and Lizzie or that episode between Heather and Shannon is best to be forgotten. However the ladies can claim all they want about being able to put the past behind them, but the truth in is the pudding.

Heather is hosting a Hoedown to celebrate braking ground on her new house. And before her husband can get too excited she just had to tell him about the “chair” incident. Last week she got into a fight with Shannon about a chair and this week she’s claiming Shannon blew the whole thing out of proportions. Allegedly Shannon was acting crazy and Heather felt genuinely scared about what the other woman was capable of. Though that doesn’t stop her from inviting Shannon and her family to the Hoedown.

Not to say that Shannon is over their tiff either. She and Vicki were talking it out and Vicki was able to understand where Shannon was coming from. Heather can take things too far and sometimes it’s like she doesn’t comprehend how much her words affect other people. So in a lot of ways she’s like Vicki.

Vicki was rude to Lizzie and Tamra wasn’t afraid to admit that. After she arrived at the Hoedown – Tamra ran into Lizzie. And she reassured the other woman that she wasn’t doing anything wrong that pushed Vicki in anyway. At the end of the day, Vicki does like to test out the new girls and the best thing way to handle her is to give the trash talking right back. As long as Lizzie doesn’t back down then Vicki will ultimately drop her attitude.

But Lizzie was a bit thrown to be hearing all of this from Tamra. She thought Tamra was Vicki’s girl so now she’s wondering how bad Vicki must be if her own friends are willing to rat her out.

Later as the Hoedown was coming along, Heather noticed that some people were late. Her friends, Vicki and Shannon, hadn’t arrived yet and it was already an hour past the time she gave them. So given no other choice – Heather decided to carry out her itinerary for the party. She called in the bulldozer and had them break ground. And her friends finally came right afterwards.

Vicki was late just cause. Shannon on the other hand was late because her husband was busy at basketball practice. She asked him to end practice early and he had agreed. But then the twins were doing really well so he ignored the time his wife had set for him. That’s why they were late.

Only Heather doesn’t see it that way. She feels like Shannon should have warned her if she was going to be late especially if her husband has a standing basketball practice every Saturday. So she has a grudge and so does Terry. They’re thinking next time they won’t be so quick to arrive for one of Shannon’s functions.

Tamra notices the tension between the women and tries to intervene. She talks to the both of them about putting their issues aside. And though they want to enjoy themselves at the party – both women are too busy playing the victim. Luckily they were willing to bench their problems in order to not get into a big scene. Which as it turns out was the only saving grace for the party.

You see there was a mechanical bull. And all the girls wanted to try it out. Heather, sadly, did not enjoy her turn and was overheard saying that she was going to turn the speed up during Tamra’s turn. How did that end? Tamra fell!

She fell off the bull so hard that it injured her arm. Nothing was broken, but Heather was one of the people cheering Tamra up after the fall. Even though she overheard mentioning the bull and someone had shouted out that she was behind the machinery – Heather is completely shocked about how fast the bull was set. She wants to blame the guy they hired for taking such risks with her partygoers’ lives.

So was Heather behind Tamra’s fall? The cameras weren’t able to give a definitive answer.