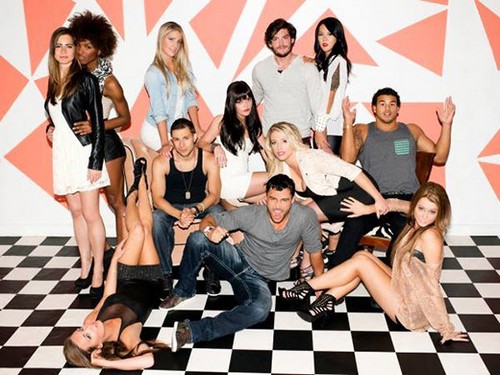 Tonight on MTV THE REAL WORLD EX-PLOSION continues with a new episode called, “The Departure.”  As MTV says expect the unexpected in the new season of The Real World.   The season started with seven strangers who all had complicated relationships with their exes and were ready to be free, enjoying single life in the Real World house. But just when they got comfortable and new relationships started to brew…. surprise, their exes moved in.

The new living arrangement threw a major wrench in the roommates’ love lives. Love triangles, jealousy, scandal, fights, hookups, breakups and makeups took over the house as the roommates either learned to live with their exes, or push them out one by one. It was apassionate new living situation — the first time to ever be explored on the Real World.

On tonight’s episode  Jay receives devastating news; tensions erupt between Jenny and Cory; and the roommates face a tough decision.

Tonight’s episode is going to be another drama packed one, which you won’t want to miss. So be sure to tune in for our live coverage of MTV’s The Real World Ex-Plosion Season 29 episode 29 – tonight at 10PM EST!  While you wait for our recap, hit the comments and let us know how excited you are about the new season of the Real World Ex-plosion tonight.

The Real World begins with Cory, Jamie, and Thomas in the living room. Cory is wearing a bear suit. Later, Arielle and Jenny are out for a walk. It’s Jenny’s birthday. Arielle asks her about Cory, she says she’s done with him, but she’ll take him back if he doesn’t act crazy. Later, Jay gets mad because his list of phone numbers was ripped up. All of the roommates but the Asian deny knowing anything about it. Arielle and Jay have a conversation about his family. He tells her that his job is to keep his family together. She tells him he’s strong. Much later, Jenny and the roommates go out for her birthday party. Cory tells her he wants her to have fun tonight. Jenny impresses everyone with her stellar dance moves. A guy at the club named Oscar hits on Jenny and they take shots together. Cory gets jealous. After they return from the club, Cory yells at Jenny for flirting with Oscar. He even goes off on Ashley in the confessional when she tells him to back of Jenny. The fight continues to escalate, and Jenny tells Cory to shut his mouth or she’s going to bitch-slap him. Jay tries to diffuse the situation, and Jenny eventually goes to bed.

Jay gets a letter from his ex-girlfriend. Meanwhile, Cory calls his ex-girlfriend, Lauren to bitch about Jenny. She tells him that he used to flip out on her the same way he’s done to Jenny. She tells him he needs to get his shit together. Arielle and Jenny go out to get Jenny’s hair done. While on the bus, Jenny starts feeling nauseous. They get off just in time for Jenny to vomit on the sidewalk. Eventually, they make it to the salon where they discuss the previous night. Jenny vows not to get blacked-out drunk again. Back at the house, Jay tries to call his mom, but she doesn’t answer. He calls someone else, and learns he has the wrong number. This makes him mad all over again about someone ripping out his phone list. He finally gets in touch with his mom, who tells him she has to have surgery on her lung. Later, Jenny and Cory apologize to each other for the things they’ve said to each other. They decide to try to be friends, but Cory seems like he may still want her for more.

Jay gets a phone call no one wants to receive-his mother has passed away. Jay is stunned. Arielle overhears the conversation and comes in to check on him. Jay is overwhelmed with emotion, so Arielle takes the phone and learns about his mother. The entire household is shocked over the news. Jay calls his ex-girlfriend to tell her about his mother’s passing.

Later, Jay tells the roommates good-bye as he prepares to fly back home for his mother’s funeral. He is still sore over his missing phone list because he missed out on talking to his mother. Back at the house, Ashley goes in the confessional and we learn that she is the one who ripped out Jay’s phone list. It’s now 14 days until the exes arrive, and the roommates are discussing Jay’s sad situation. Jay returns to the Bronx, and tells his family about the phone list mystery. They agree that whomever ripped out the phone list was messed up. That night, Arielle shares that she is planning on having some “personal time” with her favorite toy when she is interrupted by Tommy. Later, Frances sends Ashley and the other female roommates roses. At the club, Ashley gets trashed. Later that night, Ashley explodes on the roommates in a drunken stupour. Arielle says that Ashley takes herself too seriously. Ashley screams at the girls, accusing them of talking shit about her. Jenny says she gives Ashley the “Crazy Drunk Award” for her performance.

The next day, Arielle and Jamie are in the kitchen, making breakfast, when Ashley appears. They ask her if she remembers yelling at them the night before. She says she doesn’t remember anything. Later, Arielle and Jamie agree that Ashley is getting on their nerves. Jenna, Jay’s ex, shows up at his mom’s funeral to show her support. Jay says goodbye to his mother for the last time. Back at the house, Ashley is searching for her missing purse. Jamie suggests that she may have left it at the club. In the confessional, Jamie says that Ashley is constantly losing her purse. The producer calls to tell Ashley that she threw her purse on the floor the previous night. Tommy makes fun of Ashley for looking for her purse in a plant. He appears to be the only roommate who doesn’t take himself too seriously, and doesn’t engage in the drama. Wonder how long that will last once his ex arrives in two weeks?

In the Bronx, Jay and his loved ones take shots in memory of his mom. Later, he and Jenna call the roommates. Tommy answers the phone, but hangs up before Jay can tell him who he is. Jay calls Tommy back, who tells him that the roommates all love and miss him. He tells him that he’ll be back on Saturday. Back at the house, Arielle prepares for a visit from her ex-girlfriend, Ashley. Jenny is impressed with how beautiful Arielle’s girlfriend is. Later, the roommates go out to the club. Ashley and Francis are out on the streets with Carole, Ashley’s best friend. Ashley says she feels like she’s in prison. In the confessional, Ashley shares that she’s not sure she can handle being on the show. Back in the Bronx, Jenna and Jay talk about a possible reconciliation. Back at the house, the roommates realize that Ashley is gone. Later, the roommates go to meet Jay at the airport.

Three days later, Ashley is still missing in action. However, the phone later rings at the house, Jay answers. It’s Ashley who says she wants to come back to the house. He tells her the roommates will have to vote on it. Jay calls the roommates together to take a vote. They vote not to have her back, Jay calls her with the news. Cory shares that he’s happy Ashley’s gone. It’s now 10 days until the exes arrive.